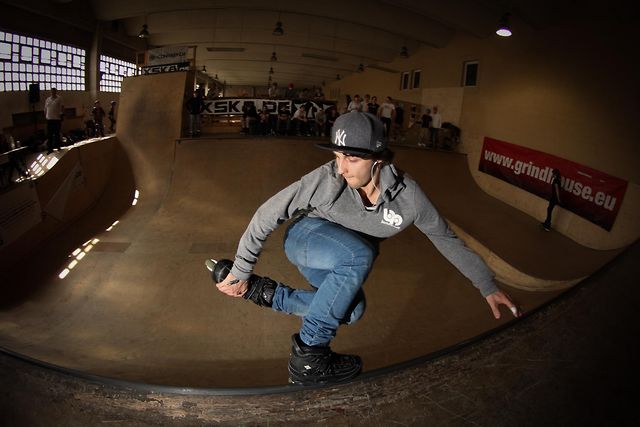 The Grindhouse Miniramp Masters featured competitors from across Germany. Despite his knee injury, Munich skater Daniel Prell caught the spotlight with his first bigger miniramp session. In all, 27 Skaters were registered. Unlike earlier events, the 2012 series will assign rankings to female competitors. Seven girls have already competed in this year’s series. Deborah Cardenas from Chile stood out as an especially surprising competitor. Repeated German champion Frederike Reisch from Berlin also took part.

Things kicked off at 2:30 pm with two runs by each skater. After the first session, competitors were divided into several groups, each of which had five-minute sessions. Ten year old Nils Rinas from Wuppertal was the youngest starter. He showed great improvement from previous years, with clean skating, and high levels of technical skill. Rinas’ performance brought him an easy win in the Under 16 category and the fifth place in total. Unfortunately he was the only competitor in the category under sixteen.

The Leipzig tour stop was marked by a high level of skating all around. The first stop in the Series buzzed with energy as every skater pushed their skills to the limit. Skaters like Munich’s Michael Wagner kept everyone at the edge of their seats, competing in gorgeous style and doing safe switch ups. In the end, the first event boiled down to a massive battle between Munich’s Daniel Prell, Berlin’s Dave Mutschall and 2011 champion Johannes Zenk from Münster.

Prell killed the wall with a huge zero spin wallride, a makio stall to fakie and countless creative tricks. Mutschall showed his technical skill, lacing a 540 alley-oop top acid. Not willing to give up his championship without a fight, Zenk showed off to the judges with an amazing wallride, long switch ups and plenty other spectacular tricks.

Watching Prell, Mutschall and Zenk battle it out in a clash of the titans, the crowd went wild. No one could choose a favorite as each skater fought to outdo the others. In the end, the judges were left to decide. They gave the hard-earned win to Daniel Prell.

Once again it was an outstanding event with a fantastic atmosphere. Everyone who didn´t show up missed an amazing event and a good vibe. I’m looking forward for the next tourstops!