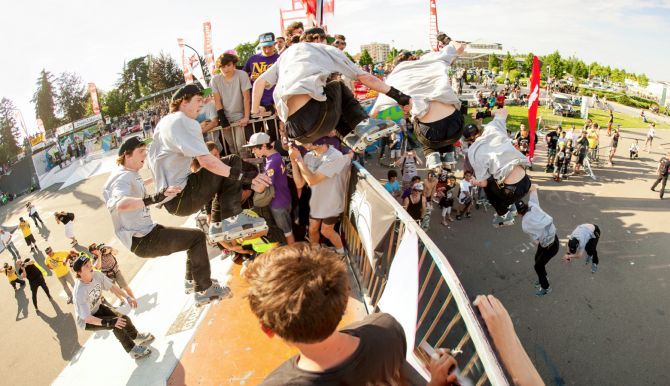 It’s been a little while now, since the seventh edition of the NL Contest took place in the lovely city of Strasbourg. But trying to reminisce everything that went down on this great week-end isn’t the hardest part about doing this write-up for Be-Mag. See, I sure remember a few tricks that went down, some mind-blowing stuff even, but you’ve already seen them all in the various edits that showed up online afterward. That’s what the Internet is great for, watching a contest that just took place on the other side of the planet, in a matter of just a few hours. Reading about it, on the other hand…

I could tell you about the nightlife, and how a renowned world champion whose name I will keep to myself almost got taken into custody, but those stories rarely raise any interest for those who haven’t taken part. Blading is full of teenagers with a drinking problem, and it’s always been that way. Growing up doesn’t seem like an easy task.And on the same topic, I could also tell you about the abundance of underage girls wearing virtually nothing but a mini skirt, but I wouldn’t want to end up in jail, or beaten up by an angry parent, may this article be used as evidence of my perverted soul by the powers that be. We however threw in a couple of pictures to make sure you get the idea.

I could tell you how a group of friends joined forces, and how they’ve been putting together such a successful event for the past 7 years, gathering thousands and thousands of spectators over the course of the week-end, but bladers are so ungrateful for the most part that I doubt any will appreciate the effort and energy. They’d rather find something to bitch about instead. Complain about the presence of scooters all over the place, complain about BMXers spending too much time on the park, complain that they could only see one side of the half-pipe during the vert comp, complain about having a streetball tournament, or how lame they think slackline really is… I could tell you how incredible it is that such a multi-sports event’s main focus always was rollerblading. And how it still is, and always will be. But I won’t.

After all, all I did was get drunk on cheap beer, work on my sun tan, talk massive amounts of shit and enjoy a great week-end, far away from home, with all my friends from all over the country, and sometimes even further. I could tell you how important this is to me, but chances are that if you don’t know for yourself already, you probably never will.