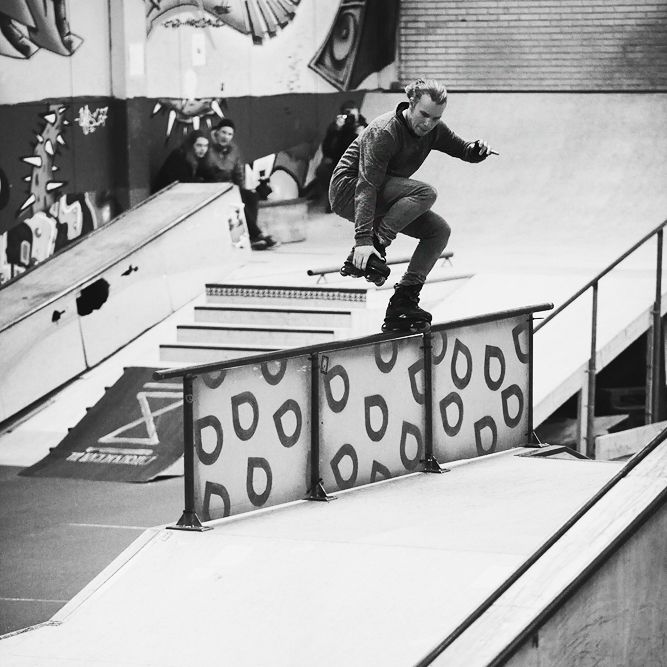 Why is that? It’s because of the Danish concept of “hygge”.  A word unique to Danish along with “Nå” and “Træls”. Those wonderfully quirky words are describing a certain Danish state of mind. This state of mind makes it possible to skate for the fun of it, have a blast and not feel pressured by the competition aspect of an event. Come to think of it, the competition seems more like a gathering, than a traditional in-it-to-win-it comp. Christian Berg put it this way: “Zero-spin it to win it!”, and I guess he’s right. It is more about showing what you have to give to rollerblading and what you have learned since the last gathering, than beating your opponents.

Everyone I talk to about Pony Cup really likes the competition, especially people attending that have come from far away. The cozy-ness of the competition and the friendly, chill atmosphere seems to appeal to the average attendee. And most of all sets the Pony aside from other Cups. So you could say the Pony Cup is hygge-lig.

Danish lesson aside this year the Pony featured a second hand booth of oldschool skate-parts and a R-A-D (Rollerblading Association Denmark) sign-up booth. Once again R-A-D, in tight collaboration with Casper Cordua, and all the volunteers at Kulturfabrikken – and a lot of other people – put together this years Pony. Thanks to all!

The venue was the legendary pony park with a few alterations made by Casper Corduas dad. He welded together three rails and a coping adding to the park for this very competition. This contributed to this rather small overfilled park in a surprisingly good way. It made the park diverse in terms of “hammers” and “lines”.

Seeing the Juniors skate in the contest was a great experience! Mothers out there should be proud. Every single one deserves the highest of respect. Just to see how much courage and ability they bring in such a young age. Kudos to the young gunz! Just to get into the names of these heroes and their tricks. Jack Eckholm took the competition. With amazing 540s and a mean and long backside backslide across two thirds of the length of the box. This guy has attitude and style like no other. Check him out in “The Swedes”, a blading video from Sweden. Otto Clausen did a backslide on the hand rail – which was grown up’s stuff – and a nice big 540 and a stylish 360 stale grab. Joachim Schmydynski did a clean royal on the flat rail and Matthias Lynghammar, a local skater, was skating with good style and speed all over the park.

Let me just say this about the Seniors competition: Jansons was there. Nils Jansons jumped across the box and landed a disaster darkside top-porn carrying gallons of steeze. Further he rocked a true makio on the high box flat-rail. Just to name a few of the neck breaking, gnarly and awesome grinds he won the Pony Cup with. This kid is for real and his skating is surreal.

Last year’s second place, Jojo Jacobi, was – in addition to skating excellent – a great entertainer. Doing funny tricks on the high extension like a toe stall or lying flat on his back, looking like getting ready to take a nap. In between the fun he did high 360s with twice the amount of grabs than usual. Kaare Lindberg wore his new bordeaux Valo’s and did tricks like alley-oop fish and soyale on the high flat rail across the box. Alex Burston did huge flat 540s and a low, elastic – almost rubbery – alley-oop soul up the hand-rail.

The Danish skater Ralf Monnerup was on a mission to win the Danish title with a 900 going from the bank to flat, soul up and over the box and, and dark pornstar down the other side, a line over the gate blazing to a wall stall 270 out between the cheering crowd. Dominik Wagner did huge 540 stales, long flawless lines including his signature alley-oop top souls, and 270 cess slides on the high extension just to name a few tricks. All skaters in the competition rolled in the deep, pun intended. I am amazed by the level of skating our little country is able to bring to the table. Thanks to all who bled out and got hurt in the name of Rollerblading!

The after party was right next to the park. It started out with the announcement of the winners. I somehow found myself playing a drum during this. Then this event turned into a dancing party. At one point we managed to do an old school break-dancing competition, containing only silly dancing. Much of the rest is kind of a blur. But on my way home I walked past a random bar and looked through the window. Seeing 15 to 20 skaters had taken over a bar at four in the morning, dancing in the middle of the floor, between chairs and old “bodega-people” – again a term that only makes sense for Danes. I joined in and it has since then become one of my best memories of this years Pony Cup. Just the sheer happiness of brotherhood and good times this competition brought to all of us, on that morning, in that bar, at this place called Falster.