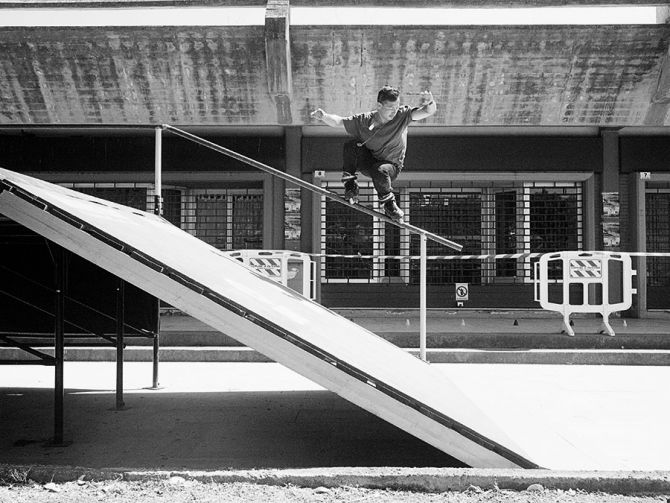 I sat inside the train station and went to a cafe and ordered an almond brioche with ice cream for breakfast, which is typical in Sicily I decided to take another look at the bus stop hoping by some miracle that something would change, but sadly realized there was no real hope to get to Paterno. While looking at the schedule an old man approached me and asked me where I needed to go. I ended up giving him 20 euros and this 69-year-old local took me to the town in his beat up Peugeot 106 Bordoux. He was driving insanely fast and his rationale was, “I used to drive trucks. I was good back then, I still have the gift.”

When I finally arrived I met Jason Adriani, Nico Fiorenza, Cesare Rios and Skino Francesco Cortese. Together we walked through the village towards the skatepark. Every single person that we met on our way to the park stopped and asked us if we were there for the competition and what time it was starting so that they could come and watch. This was a strange feeling and it was nice to hear people were interested in blading.

The skatepark was a single line kind of slope style course, which was set up in the local police department plaza. It was built by the locals and made us feel a little nostalgic, like it was an old ASA Pro tour park. There were some big fun boxes with drop rails and a rad vert quarter to play on. The sun was blazing hot but there was a steady breeze to keep us cool during the contest. There was a big turnout of spectators from the local village and surrounding areas of Sicily to watch the skaters compete. Francesco Cortese from Naples took first place in the amateur with crazy topside negative tricks and Jason Adriani took first place in the pro comp. He killed the course with disasters and huge airs on the quarter. At the end of the day the Mayor of Paternò presented the winners with their prizes. The whole village was stoked about the show and it made more kids want to start blading. In the end we went to eat at a restaurant called Top Gun, which is a place where they mix local food and kebabs that became legendary during our stay on the island.