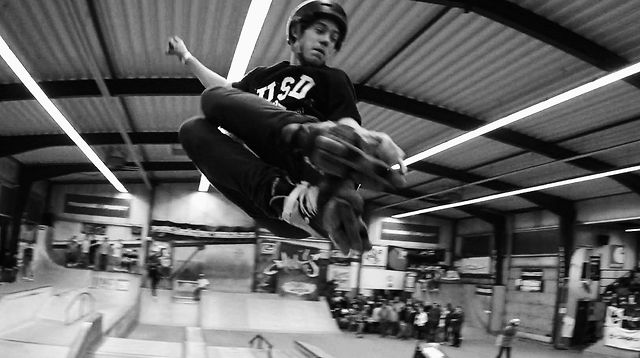 Competitors from Germany, France, Spain, Austria, the UK and more came to blade obstacles years-old and brand new, fuel up on beers and catch up with each other in a real blade-festival atmosphere.

Because on Fridays I-Punkt is open until midnight, beers are 1,50 €, (God bless European skateparks!) and because this was a blading event in a party town, the freezing Saturday started off slowly. But the I-Punkt guys got the grill fired up, registration open and the coffee and beer flowed.

The Girls contest turnout was lower than I’ve seen for a while, but all three ladies held up well and skated hard. Anna-Lena Cohrs’ style and consistency wasn’t to be fucked with, and she took the win.

The Amateur contest was fierce from the very start, with local hero David Botchwey putting together a nearly perfect run in qualifications but not managing to repeat the performance in the finals. Gino Dangers combined hammer and tech, ending on a 450° backslide down the handrail and taking the win. Second placer Eric Droogh also shredded solidly, with switch and regular tricks including 540°s over the jump box and 360° topsouls on the long sub, ending up on a blind 540° transfer from the park to the bowl.

Many hours and beers later and the pro battle was getting deadly. Jo Zenk’s ability to slow down time while airborne and speed it up while grinding took him to 6th place, just edged out of the top 5 by local shredmeister Melvin Siemianowski.

Gabriel Hyden took the 4th spot with stylish lines and a crazy alley-oop topsoul to soul on the armpit-hating new ledge. The German master title and 3rd overall went to Dominik Wagner. He exploded into the park from the vert ramp and went on to generally ruin everyone’s idea of what a good stunt-filled skatepark line should look like.

Even that couldn’t stop him from being outmatched by Lomax with a casually enormous 540° to flat and soul to 360° soul, among others. Finally Abrate took first after a hard battle, spinning and flipping in and out of the bowl like a suicidal goldfish, and throwing together long, fast and technical lines of the type that basically deserve to win contests. A 1260° at the end got the crowd going but trying to pick a best trick from him would be stupid. Perhaps the 10-foot drop royale on the unwaxed rusty safety fence?

After that, of course, everything is kind of blurry – for some people more than others – after variously downing vodka bottles airport-security style at the door of the club, getting lost in Reeperbahn and waking up in train stations. A few lucky survivors made it to the Fischmarkt for 6 am snacks and reggae-coffee, despite the day full of cheap beers and cheaper “shots” that came in tiny bottles. Blader parties… you didn’t need me to remember all that. You all know the deal.

A huge thanks to everyone involved with the contest, the organizers, sponsors, skatepark staff and of course all the bladers who came to shred, give up couches and floors, and party like only the German blade scene can. See you all at Winterclash, it’s gonna be tropical.