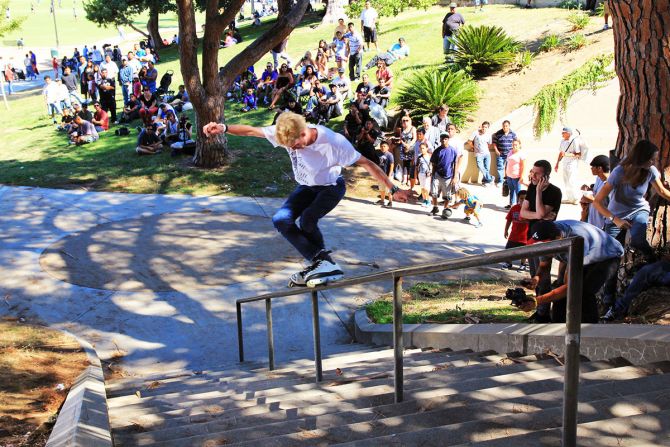 The finals took place right smack dab in the middle of Los Angeles. Any skater that finished top 3 in any other Chosen Few event did not have to skate this round which is a leg up because the next three spots were big. Although Tyler Hester was one of the people who didn’t have to skate the first round he wanted to mess around on the ledges anyway and ended up catching an elbow to the face during warm ups leaving him with a gash on the left side of his face near his eye and a bad head ache.

Anyway, the first spot was a new skate plaza and we restricted the obstacles in round one to the primary ledges in the park. Winston Wardwell and Mike Sanchez laced some good switch ups on the triangle ledge. But two skaters I was really impressed with was Chad Tannehill and Oscar Sosa, two youngsters who’s first times skating in a competition. Oscar made it to round 3 and Chad finished 9th. Some memorable tricks from the first spot include Andrew Dipaolo’s alley oop top soul on the high ledge, Chad Tannehill’s royal up to 450 royale down on the triangle ledge and Chris Calkins’ all around stylish skating on any obstacle he touched.

At spot 2 things got intense real fast. This was the 2010 final’s last spot. This rail is big, fast and has a down hill approach making things even harder for the competitors. Iain McLeod began his massacre with his introductory trick. A perfect truespin fishbrain with a grab 180 out and then went on to 360 soul, 360 soul to soyale, 450 royal, cab truespin topside soyale and cab truespin topside acid. Tyler Hester had shaken off his earlier injury and made sure he secured himself a spot in round 3 by doing some of his regular moves like 3 soul, 450 royal and 3 acid revert out. Always a joy to watch someone so good that those tricks are just natural for him now. Anthony Luna laced a 3 sweaty first try as well as all his negative tricks which were scary tricks to try on this rail after Iain put  a fresh coat of wax on it. Little Ricky laced a 450 royal down the ankle high down ledge on the side which is insane. Some other down ledge tricks that were laced on that deadly thing were AZ local Kenny Scherf’s perfect fishbrain and Oscar Sosa’s kindgrind.

Because we were doing four different spots this year, spot 3 and spot 4 were combined at the end and the points earned from them determined the top 10 skaters. Spot 3 was being judged on a trick by trick 1-5 point scale format just like the other two rounds. Spot 3’s obstacles were these two out rails that have been a local LA spot for quite some time. We were planning on skating both of them but because of cars parked in the way the easier rail became very hard to hit. A few tricks were laced on it but not too many. The main action was on the launch to rail we set up. The rail was about neck high and a few skaters were having trouble getting used to the awkward kick the ramps gave but everyone got on track after a few tries. Iain went to work again lacing a perfect soyale off the end, a sweaty and a flawless top mistrial 540 out. The soul 900 was tried twice but he couldn’t quite hold on to the landing. He wanted to change into his Horns and try it again but the round had already ended. Russell Day took the cake at this spot. Every trick he laced here was perfectly executed with some of his unique flavor thrown into each trick. 270 back roy, ao porn, top porn lui kang out and some creative transfers racked up Russell Day some serious points up.

The format and rules changed for the final spot. The point scale had been increased from 1-5 on each trick to 2-10 and the skaters were required to do lines in order for the tricks to be judged. A single trick no matter the difficulty, creativity or style would not count unless there was some type of line involved. This made the finals extremely challenging but if the lines were landed the point collection would be much higher. You could do any type of line including just jumping the first set of stairs. The spot was lined up with a 7 stair then a 14 stair then a 19 stair. We also added a nice board down the middle set in case anyone wanted to handle some gaps. We’re glad we had purchased that board. The top 11 skaters we’re battling it out at the start but it really weeded itself down to 6 skaters. Daniel Rosado known more for his ledge skating got pretty liberal on these rails and did some nice diverse lines. Andrew Dipaolo hung around with some great alley oop topside tricks. Anthony Luna was killing it with line after line. My favorite line was where he pulled negative acid on the first rail then top acid on the second followed by a true farv on the last. Russell Day was just a little too far ahead at this point for Luna to catch him because of how many points he had racked up in the round before. On top of that he nailed a 270 back savannah switch and natural in a line along with some other solid lines in the finals.

It really came down to the two guys everyone expected it to come down to: Tyler Hester and Iain McLeod. Tyler had a rough start at the beginning of the round but made up for that quickly lacing a half top acid line and a cab true mizou line. Tyler also hit a pretty good 3 soul line but Iain followed right behind him with the same trick and did it a little better. Iain started out strong lacing line after line of solid and technical tricks and then moved on and started going for the gaps. He did a flawless 180 and then followed that with a huge 540 and being the man he is he even tried to fakie 720 the 19 stair but slid out a bit on the landing. This set is only a step smaller than El Toro. At this point when most would have stopped skating, Iain Mcleod continued to skate doing a parallel 270 back farv on the 14 followed by a full back royal on the 19. Then went back up and hit an alley oop topsoul on the 14 and followed it with a truespin topside acid on the 19. At this point he finally stopped skating probably feeling his legs cramping up and knowing he had secured the victory. But just as he stopped skating Tyler Hester did a safety grab over the 7 stair then a sweaty on the 14 followed by a picture perfect 450 kindgrind on the 19. I don’t think Iain was ready for that. Tyler Hester and a few others were standing at the top waiting to hit their final line. All the skaters at this point were exhausted but Tyler sucked up the pain wiped the sweat from his eyes and went for the final line of the day. He mute grabbed the first set then hit a top acid on the second rail and ended it with a perfect hurricane top acid first try on the 19 stair. Everyone went crazy and Iain was unsure at that point what the results would be.

Although the last two lines from Tyler Hester were amazing and flawless, Iain had pulled too far ahead in the early part of the round and his huge gaps did in the end guarantee him the Championship of the Chosen Few Finals 2011. With Tyler Hester coming in second and taking best trick with his 450 kindgrind line and Russell Day coming in third.

I want to give a big shout out to Razors who sponsored every Chosen Few competition this year and was our Gold sponsor at this year’s finals, and thanks our Silver  Aggressivemall who was a Bronze sponsor at every Chosen Few event in the US this year and a Silver sponsor at this years finals. Thanks to all the local organizers I had the privilege to work with as well as all the filmers, editors and graphic designers who helped on the videos and flyers. A huge shout out to all the skaters and everyone who made it out to a Chosen Few event this year. We are already organizing our 2012 series. See you soon!