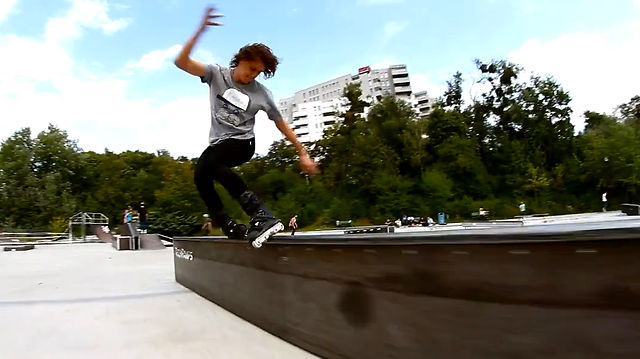 The contest was held at the Poznan’s „Island” skatepark, the biggest outdoor skatepark in Poland. However “the biggest” does not have to mean “the best”. The vast area of the whole park is divided into 3 sections: the funboxes, the grindboxes and the small, training stuff. Going from one part to another took ages which meant not many fluent lines were shown that day. Each of the rider usually started with some spins/jumps on the funboxes, then some coping grinds and if he/she still had some time, they rushed to the grindboxes to finish their runs.

Because of the spacious skatepark the comp was very demanding for the participants. In the end the top 8 riders made it to the finals where even the slightest mistake could cost you a place on the podium.

The odds-on favorite Piotrek Combrzynski (Hedonskate, Razors) cleared the course flawlessly with a mix of great spins, wall rides and grinds – leaving a good impression on the crowd and judges as well. Lukasz Wolski from Wroclaw made a great comeback after an injury. Unquestionably the best tricks on the spine followed with hardpan top acid on the rail earned him a well deserved 2nd place. Yet the difference in points between him and Piotrek was only minor! The 3rd place went also to a Hedonskate rider; namely Krystian Zarzeczny, who did the highest airs and solid coping switch ups.

Thanks to Polish Rolling League the West Side Comp was another good rollerblading event, gathering people from all over the country. Being almost the last chance to gather points for the Polish Rolling League overall ranking, it was no wonder that the contest had a  full line up of bladers in each category: Masters, Senior, Junior and Girls fought their way to qualify for the grand finals of the Polish Rolling League coming up in Warsaw next month. Read up on all the details here and make sure to pay us a visit!