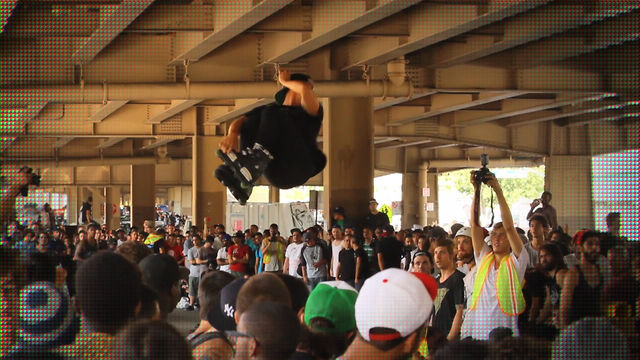 What made the move in this direction a must? Where did the influence and idea come from?

Daniel Kinney: The WRS ‘Uploaded’ contest is not really a new direction for the World Rolling Series but rather simply an addition. For various reasons the World Finals event – last year at Rye Airfield – couldn’t happen in 2011 but will return in 2012 in full force along with the new ‘Uploaded’ contest. ‘Uploaded’ was not created to replace anything.
‘Uploaded’ was influenced by the continuous influx of online videos created by everyone. A contest to reward the best of those online videos seemed to be a no-brainer.

Kato: Yep, and to answer your second question, ‘Uploaded’ came up during a phone conversation between Shima and I. We were brainstorming about an exciting and chill way to end 2011 and suddenly he popped the idea. A video contest is nothing new but how cool is a major online video battle for the World Finals?!
Riders have their fair share of adrenaline and craziness throughout the whole year in conventional competitions and as a year-ending event, ‘Uploaded’ is a way for them to end it smoothly and on their own rhythm. ’Uploaded’ is designed to be a relax and laid back approach to competing, as well as a lot of fun for us fans. We hope people and riders will see it that way!
The WRS year ending event in San Diego, where winners will be announced on Dec.17, will also share the same philosophy: good times, friendly pro sessions in the OB bowl, BBQ, after party and award ceremony…

What is the intended goal for ‘Uploaded’?

Daniel Kinney: ‘Uploaded’ was created to reward those rollerbladers that thrive when a camera and a few others are there to see them blade. This contest will reward those bladers in the same way that street or park contests reward other bladers that love to compete and push themselves in front of crowds.

Kato: We leave the creativity door wide opened. Most riders like to film edits and we all love to watch them, you get the point. ‘Uploaded’ is also a nice addition to the series of existing events we have such as Bittercold Showdown, Winterclash, and dozens more… Diversity at all levels.
WRS ‘Uploaded’ also gives qualified riders from all around the world the opportunity to participate in a major event without having to spend major travel money.

What number of edits will be shown on the WRS site? Is it just for points in WRS or is there something bigger?

Daniel Kinney: All edits will be shown on the WRS ‘Uploaded’ site but also be available to be shared all across the web.

Kato: And 5 star events do earn riders a lot of points, it can make a difference in the year-end ranking for most of them and it’s also a good head start into the 2012 qualification. Bigger? It’s the Finals man, that’s pretty damn big!

How will the winner be chosen? What types of prizes, rewards, and benefits will come out of this?

Daniel Kinney: ‘Uploaded’ will be judged by a panel of current editors and videographers within the rollerblading community. Their names will be announced soon.
However, the ‘Fan Favorite’ will be determined by public vote, which will start at WRSuploaded.com on December 1st!
‘Uploaded’ will reward points for the WRS ranking and split a $3000 in prize money between the top 5 and the ‘Fan Favorite.’

Will this be divided up regionally or is it all put together in one big pot on a global scale?

Daniel Kinney:‘Uploaded’ is absolutely a global contest! Submissions will come from all over the globe. Prize money has been gathered thanks to Razors, Remz, Rollerblade, SSM, and Valo, along with Eulogy Wheels, First and Lexington Clothing, Roller Warehouse, Aggressive Mall, and SWS. This is truly a global contest that allows competitors to enter with just a few clicks on the computer!

Will those be shown and promoted in different media venues or strictly on the WRS site?

Daniel Kinney: Submissions will be featured on WRSuploaded.com and that is also the only place where anyone can vote. So be sure to bookmark it now and visit frequently between December 1 and December 17! However, the videos will also be shown on Be-Mag, ONE and available to be shared all across the web. We are hoping that everyone shares their favorite videos and spreads rollerblading across the web.

Can we expect more online-driven programs in the future from WRS? Will there be a division between the online world and the physical world of competition?

Daniel Kinney: Depending on the success of this contest there could be a point where multiple online contests are made available throughout the year. That really depends on the amount of prize money the contest is able to generate and the demand from competitors. There will be no future division between the online and physical world. It’s all blading!

Where is the World Rolling Series headed in the near future? Any changes in format to come with how influential the internet has become?

Daniel Kinney: ‘Uploaded’ is just one of many directions that the World Rolling Series will take in the future. There is so much more to rollerblading and how it brings us together along with how it is shared with the rest of the world. It would be ridiculous to ever rest on doing the same thing!

Friends, now is the time. It’s your turn to crack the ballots: logon WRSuploaded.com, view all of the competitors in the field, and choose from the best. Vote for your favorite edits from some of the best pros and qualifying ams, in the end your say will crown the ‘Fan Favorite’!

Fan voting will go on from December 1st until December 17th on WRSuploaded.com!