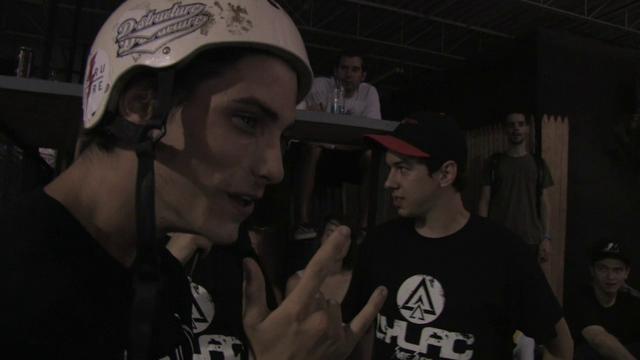 On the 18th and 19th of June 2010, the Montreal Classic was held in the second biggest french city in the world. It took place at the famous South-Parc skatepark where Lylac skateshop is also located.

As I entered the park on Friday afternoon, Guillaume Latrompette and Thomas Camus were already trying to film tricks with Lylac team rider Mathieu Ledoux. Mathieu has seventeen years of experience on his skates and is one of the most unique skaters I’ve ever met. He found the perfect tangent between rollerblading and freerunning.

Besides Mathieu, I was excited to see the performances of other local superstars like Kevin Lapierre, Fred Beauchamps, Julien Deschamps, Jason Segeleski, Matt G, Dan Millar and Stephane Julien (who unfortunately couldn’t join the event since he was getting married on Saturday).

People from all over Quebec and Ontario arrived, followed by all the Americans. The session was accompanied by Dan Laroche cooking hot dogs with a small chilling session going on next to the BBQ. It was funny seeing the French making fun of Quebec people because of our accent and the Anglophones making fun of French people talking english.

Get your hotdog and skate: Welcome to South parc

Saturday was the day of the contest. Dan Laroche, Guillaume Roy (organizers) and Dan Vez (south park owner) went to bed late since they had to set up 2 new rails for the contest. LSC, which was years ago a Quebec rollerblading clothing company, made a comeback selling products and sponsoring the event. It was really fun skating a contest with all the Montreal family since their was no stress at all.

LSC is back in the game

Matt G skated well doing a lot of different tricks and trying to be as harsh as possible, he took the 8th place. Julien Deschamps demonstrated his balance skills once again taking 7th. A small park rat from Philadelphia named Shawn Martin took 6th. The top 5 was qualified for the pro contest. David Lagacé skated fast and did some solid lines as usual taking 5th place. Daniel Millar acted like a crazy peruvian doing perfect sweatstances, true makios and alley oop fishies. I (Maxence L. Valade) took the third place doing cess slides and thinking about nature. Benedict Chevrier and JC Lanthier took respectively second and first place which is really nice since they are best friends. They skated with no fear as they always do, throwing crazy spins into grinds and on the table.

Around 6pm the pro competition started. Chris Haffey was warming up upstairs the skatepark flipping bottles, Julian Bah was skating with flawless style being ”une chaussette”, Brian Arnold did amazing tricks on the big down rail (fakie 540 back unity or full cab alley oop top soul), Wake Shepman was trying to figure his run out watching the garage door that was twice his height. Brett Urbas was being encourage by his dedicated dad which was into the contest like a football game. The top 5 made it to the finals. Jerry Butler (5th place) was doing crazy 900 and flat spins over the biggest gaps in the skatepark. This Lylac shop and Remz team rider has one of the most fluid style, even my dad said so. Adrien Anne (4th) was showing his technical skating skills, especially when he did a 270 back backslide to alley oop top acid to acid, as soon as he landed, he started laughing and it look like he did not even understand what he had just accomplished. Franco Cammayo (3rd) demonstrated his creativity doing a perfect top soul 540 out. He felt pretty hard trying a front farv to gap and almost broke his arm. Roman Abrate (2nd) used his crazy park spinning skills. Finally, Chris Haffey took first place basically being Haffey. All these competitors did not focus on only one obstacle, but on the whole park and it made the fight for the win more interesting.

The after party took place at l’Abreuvoir but we arrived at 1am because Roman forgot parts of his life a bit everywhere around the city. We then got stuck in the stupid fireworks traffic. Guillaume Latrompette is probably the most interesting but stinky person to see when he is drunk or even in regular daily life. Julian Bah had the smallest eyes on the planet. Sylvain Chaussé was at home eating fresh bagels. Every one was pretty drunk and happy about their long but fun day.

To conclude, I would like to thank Dan Laroche for organizing this event helping Montreal’s skating scene year after year to get noticed, Guillaume Roy from Lylac skateshop for helping to set everything up, Jonhlee for being a good DJ and finally South Park for being amazingly cool with rollerbladers. There was certainly less pros than last year but the level was still insanely high and Montreal rollerbladers saved the situation being who they are. Next year, you should consider coming to this event to experience Canada, Quebec and the only francophone metropolis in America.