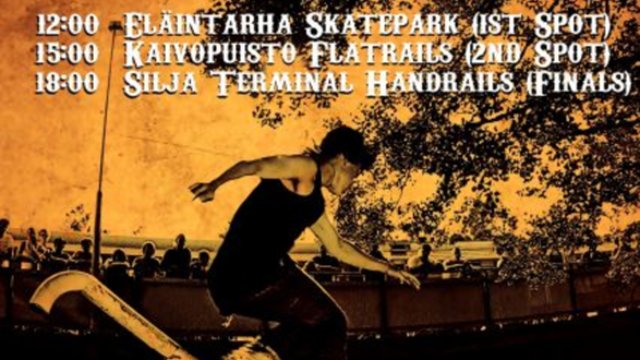 Saturday 12th of june (the day of the competition) started worse as the sky relieved some rain. We had to postpone the contest for two hours and thankfully we got back on track at 14:00 (2pm).

The comp started with the novice contest: Five minutes on the curb and after that one minute runs in the park.The expert contest was a complete different league. There were four curbs in the prelims to enable more line skating. Despite of the delayed start, the crowd was stoked and the skaters were busting out some nice tricks while the sun slightly came up.

Well known skaters such as Evgeny Leonov, Nils jansons, Max Jubin, Lauri Harle, Perttu Tiainen, Mats-Kaarel Ruus, Indrek Uibo
represented hard and impressed the crowd. And finally in the semifinals we got blue sky and sunshine wich started to motivate the crowd to open up bottle caps and start to make some noise!

The 2nd spot was a flatrail spot with gap in the middle. This spot was perfect for some nice switchups and Nils from Latvia went for the gap. First topsoul he laced a topsoul trasnfer, but stepped up the game by lacing a topsoul to disaster true top-soyal. Hell yeah!
Six skaters then advanced to the finals: Mats (est), Lauri (fin), Evgeny (ru), Nils (lv), Indrek (est) and Egor (ru).

The Final spot was a drop rail with a 3m gap and hard pavement on the other side. Judges and skaters agreed to evaluate all the tricks landed, rather then judge a single best trick. So time was set for 20 minutes and skaters were ready. Game on.

Evgeny suprised everyone right from the start. With his perfectly landed tricks and this textbook alley-oop makio he just underlined why he belongs to the top of the street skating world. Nils decided to go all for the balls. And he definitely did. He landed everything with ease and the best trick of the contest, a hurricane topsoul. Harle came up with a solid fullcab kindgrind and a 360 soul. Mats also skated well but didn´t wan´t to risk on drop and went for a few clean tricks.

Worst fall of the day was seen when Egor fell from a hurricane topsoul attempt over the rail and hit his face. During the last minute at the last spot we all witnessed a hard battle between Harle and Mats going for a 180 over the stairs into a really narrow landing.

Thanks to all the sponsors (Razors, Swift2foot, Remz, USD, Hedonskate) and the attendees for busting out some sick tricks. And of course I thank everyone else who showed up to make Mukko once again to the greatest contest in finland this summer.

And here are some more pics shot by Samu Hintsa.

Horngacher taking care of his colleagues.

Evgeny Leonov from Russia warming up at the first spot

Even more pictures by Samu Hintsa can be viewed here.