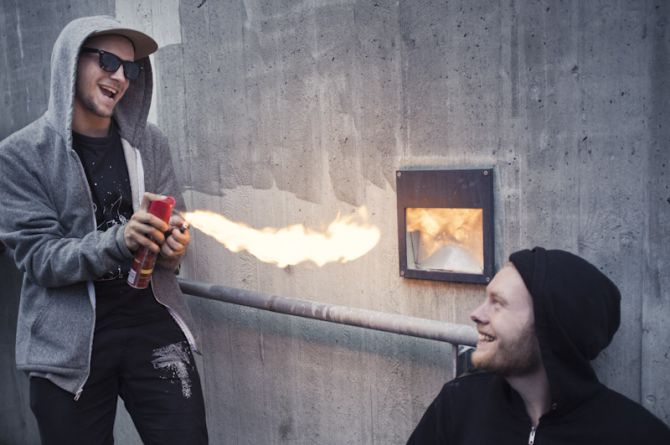 Then the rain came. It was a slow rain, drizzling down for an hour. We packed our things and left. Many thought that this would be the end of the competition. But we went on to Islandbrygge station. There was a covered back-up spot. But that spot was – for some reason – filled with gravel. With no broom or any other means to remove the gravel, we traveled on. Our dear photographer Kenneth Nguyen decided to pump up the action by crashing on his scooter. Apparently the accelerator got stuck and he jumped of, did a rolling summersault and saw the scooter crash into some bikes and land on its side with the accelerator going full speed. The first real stunt of the day. Thanks Kenneth!

We finally found a rain-spot. Under a building with heaps of curbs and a big hip-high curb as well. The competition was saved! The curbs were sloped on top, so they slid like a rail. Nobody kicked us out and Christian Berg’s friend turned up with a Christiania-bike filled with beer… The Young Guns skated really good. Jack Eckhart once again showed amazing talent by doing hard grinds with spins in and out, with his baggy style and I-don’t-give-a-shit attitude. Otto with his fast pace and solid grinds. Theodor with his clean style and Oliver Ericsson’s tenacity to do a lot of grinds. The Romanian senior Mihai Militaru owned this spot. He did a wall ride to back royal to wall ride on the concrete columns in either end of the curb. He also did a mean and fast low ridin’ backside U.F.O. that looked amazing. Jacob Juul did a whole series of unity variations. Just to show that he was back in the game and that no unity-trick should ever be left behind. Seth Nicolas exclaimed “You really need to pull some shit to beat all these good grinds”. Olav Norheim did a cool and creative makio to one foot roll to ao soul. The columns really played a big part on this spot. Whether a person would get out of his grind soon enough not to hit the column, or miss and go face forward into the column made people spontaneously burst into “Ouuu” or “Auuu” a lot of times. Luckily no one got seriously hurt.

At the end of the 1st round, which because of the rain turned into a combined round one and two, we moved on to the bonus-curb. The bonus-curb was a hip-high smooth grinding concrete curb, 5 meters long with a good run-up, but with a very short landing. And also a 40 cm gap over its entry part made of glass. A lot of people people struggled to jump on the curb. And many had already given up. But a few skated the curb well. Kare Lindberg did a low sweatstance. Seth Nicolas hit it with an alley-oop porn star to backside backslide. Jacob Juul did a clean fish brain and a front fahrvergnugen cess-slide through the entire curb. Alex Popovic did a true porn star – one of his standard grinds – not knowing that he later would experience the day’s worst slam. Patric Stahl (Astral Pitch) launched to an impressive truespin top soyale in company with his Swedish countryman Adam Hakanson. Adam also grinded this spot as if it was an ordinary curb. As a sarcastic remark a man started to vacuum the office space behind windows just at the end of the curb. He was pretending not to see us, surely not knowing that this was the Scandinavian Championship in street skating. Cus’ if he knew, he would be cheering and quitting his job to skate and party with us, of course.

The crowd of people, around eighty rollerblading lovin’ people, marched on back to Islandsbrygge station. There they got on the metro straight to the final spot. A big kinked rail at the Amager Strand station. The entourage was stopped by a metro personal and told that this many people needed a clearance to get on the train. But for some reason later on it was OK that everyone got on the train. For now, and he just wanted to give us an polite reminder. It’s cool that a rollerblading event can cause some commotion – and confusion – once again.

The sun wasn’t shining, but the weather had gotten better. The pavement was dry – at least dry enough to skate. Before anyone had started the competition on the third and last spot, Jacob Juul jumped on the rail and did a top soul – first try. Then the rail to the side, leaning towards a wall covered with a gnarly lattice. From that point on there was little to do for anybody else. The Jacob Juul streetskating-machine was set to “win” and no rail was going to stop him. Mihai Militaru fought back with a half cab sweatstance to alley oop topside mistral. Kare Lindberg did a half cab top soul. He also tried a 270 back royal several times, until he fell on his ass all the way down the last set of stairs. He was out. Seth Nicolas tried a half cab fish brain and hurt his ribs really bad. Apparently this was the day of the half cabs. Adam Hakonson slid faster down the rail than anybody else. Like he was trying to do a world record in ‘fastest top soul’. He also took a hard punch to the side from the rail.

Alex Popovic approached the rail with good speed straight into the worst slam of the day. Trying to do something that completely failed, spinning around in mid-air, with his legs kicking all over the place. Landing forwards on the rail with one leg under hitting this leg straight into the vertical pole holding the horizontal part of the rail. He immediately took to his leg and looked as if he was in immense pain. Casper Cordua helped him up the stairs while people greeted him with a round of applause for his effort. Ralf Monnerup hit the rail with a couple of souls but ended up with a deep cut into his elbow. Even Kenth Ulvedal who is skating with the greatest accuracy got tripped by the rail. So much that he almost fell on his head on the other side of the rail. Everybody took a beating from this rail. Except from Jacob Juul.

Even the rain came back we still found a worthy Scandinavian Champion. Congratulations to Jacob Juul and thanks to all who attended this year’s SRSRC and made it one to remember!