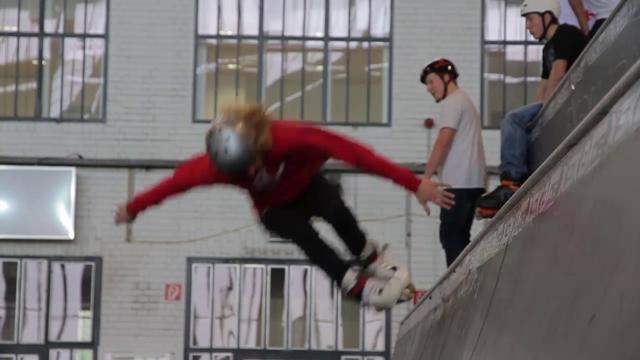 We (as outstanding folks) often forget about this. We tend to see something is wrong with an event than appreciating that someone invested a lot of time and energy into such a large project. I would like to say THANKS to those people who take the risk to promote the industry.

The Rolling-Berlin event, consisting of the European Half Pipe Championships and the Grindhouse Spine Masters, took place from October 1st – 3rd. In the scope of things, Europe’s biggest Youth convention is just more than a usual WRS event, it’s a special platform for the future of our sport. During the three days of the competition, more than 30.000 people passed by to witness the excitement and athleticism of rollerblading.

Spectators saw some young guns like Dave Mutschall and Jo Zenk destroying the spine with lots of style, fun and enthusiasm. These guys are great role models for the future of our sport. Parents and kids in the audience witness this and get interested. The kids want to do the same, they want to be as cool as them, they want to start rollerblading.

We need to bring more support to these events that bring rollerblading to a larger audience. Events like the ‘mind the gap’ which take place in the public light of hundreds of viewers and spectators does a lot for getting the sport noticed because it is not hidden in a skate park. These types of events bring a ton of outside interest.

I was really impressed with the level of the European riders. It was amazing to see the newcomers who are constantly raising the bar in competition skating with their own and unique style. More than that, most Amateurs were not above skating alongside the established and well-known Pros like Sven Boehorst and Dominik Wagner. In my eyes, the most impressive skating that day was shown by Sven Boehorst. He simply killed the Spine-Ramp with a clean style, lacing difficult tricks such as 540 BS full torque without any slams. It seems as if he has the same ramp in his backyard.

Mathias Silhan threw huge airs and spins. Fredrick Anderson’s super stylish flow on liptricks was off the chain. It is just good to see what is possible on rollerblades these days!

Quoting Frank Romeike (founder of the event):
After six days of working, skating and loud music, I think that this event is one that is worth keeping alive…Thanks a lot to Marco, Franzi and Sue who spend so much time, money and energy into this event! We also have to send a big shout out to Daniel Barkowski from the Messe Berlin who believed in the media-effective power of Rollerblading and who was and is our friend and supporter for the last seven years.

Here is the official Be-Mag edit of the event:

Also make sure to view the organizer’s official edit (produced by Alexander Stock):