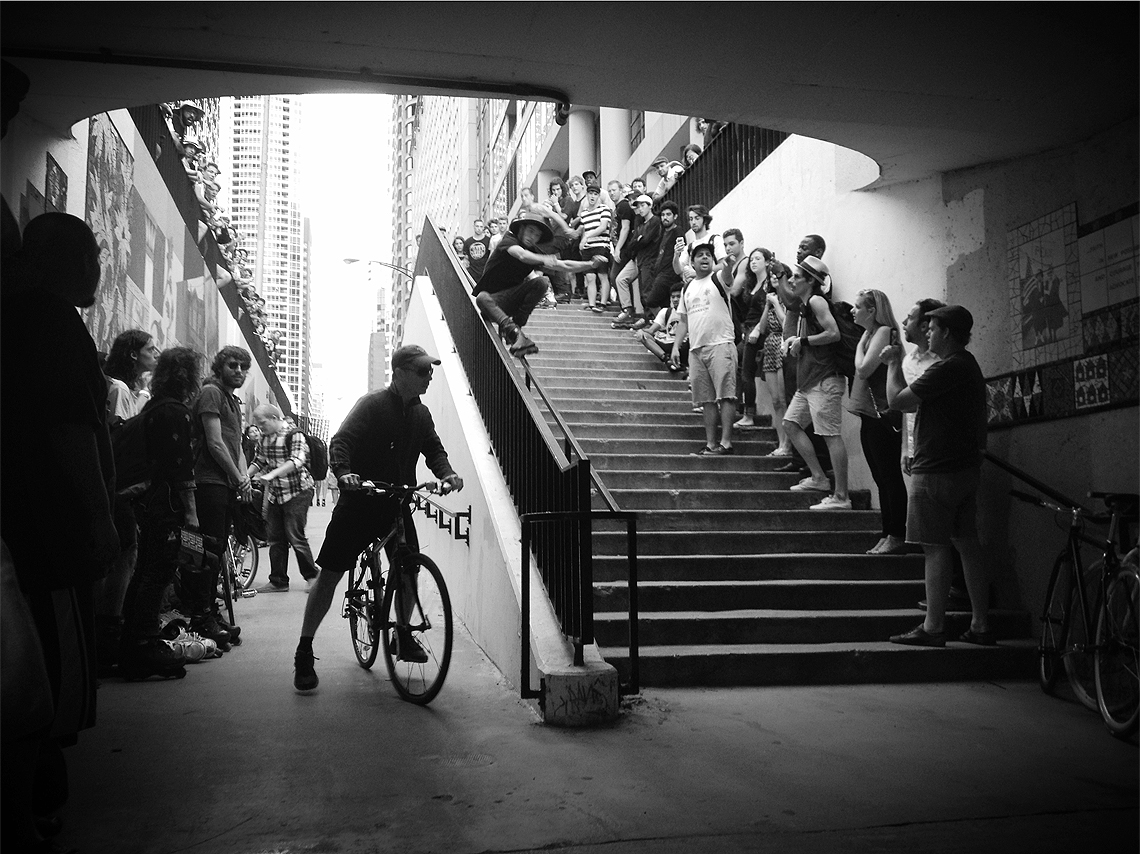 One of the worlds’ longest running and best organised real street events, Chicago’s Windy City Riot took place on a hot and sunny August weekend. With a solid attendance from around the US and further afield, to compete or witness the street fight for the two-grand, this year was the highlight of twelve years of Chicago blading history.

The roar of the elevated green-line subway train hurtling past on Lake Street was deafening. Every ten minutes or so we’d have to shut up because of it, it was impossible to hear anything else until it had passed. The smell wasn’t too bad, considering the rooftop was strewn with rubbish and debris sitting out there for who knows how many years. The night was dark, humid and sticky. It had been the hottest summer I’d experienced in a very long time. There were however a few white plastic garden chairs, for the lucky few, cavity blocks or the rooftop edge for the others, and beer. Plenty of beer; Pabst, Moreno and the such for those in attendance, called together for a progress report and round table rundown on the Windy City Riot, still over a month away, but fast approaching.

Under the watchful gaze and glow of the Sears Tower, with distant police sirens and other downtown noise as our backdrop, Collin Martin chaired this crew meeting three stories above THE PULL blade store. Holding court like Tywin Lannister the agenda was firmly kept on track, no bullshit, no prisoners. Ain’t nobody got time for that. This being the twelfth iteration of the Riot, and Collin’s tenth at the helm, experience showed and he kept it snappy. Take care of business, and business was brisk. Fairly unique to the WCR, this summers sunny weekends were mostly dedicated to fundraiser comps at various skateparks around Chicagoland, each with a different host. Fundraisers whose sole purpose was to raise the coin for top billing at the WCR in August. Two thousand American dollars for the winner of a grassroots real street competition. THE PULL guaranteed any shortfall in the fundraising, but the bulk was to be raised by the locals, the believers. Not by industry sponsors. This was a little bit special.

With Jordan Williams emphatically taking minutes we learned some had been more successful than others, a good war-chest had been amassed, but not enough. It was time to get creative. Ideas were thrown about and a rewards-style push was instigated. Rewards such as rendezvous bottle service with one of Chicago’s smoothest socialites, blade sessions with sponsored locals, cameos in rap videos, sexy photoshoots, etcetera. All tempting. The change of tact worked out. Pretty late in the day a few key sponsors were picked up and gratefully received for sure, Jordan Craig, Top Level Society, Lake Bluff Brewing Company, Pabst Blue Ribbon, Sunshine Distribution, Themgoods Distribution and Roller Warehouse. Especially the booze co’s, enjoyed with the freshly engraved official Windy City Riot 2013 pint glasses.. what a fine memento of the weekend.

But the big dollar prize and major draw to the top dogs in street blading was fronted by the entire crowd that would attend and enjoy the event on the day, and it doesn’t get more real than that.

Friday night before the WCR, we’re lined up probably 30 deep, maybe more right across Michigan Avenue at a stoplight by The Drake Hotel facing south. Dozens of cars behind us waiting for the green, wondering what the fuck’s going on. Four police officers are close enough on foot to grab more than a few of us without moving, but appear more interested in giving directions to the tourists looking for the John Hancock Tower, which we’re facing. Organised by Mr Ben Price as an alternative to previous years’ default Friday night skatepark session, we’re at the starting point of an alley-cat style race through densely packed downtown Chicago, complete with checkpoints, printed maps of the route, pitstops in pubs, points for tricks along the way, with a finishing line and enthusiastic crowd waiting over at THE PULL.

The lights go green and like a pack of greyhounds we sprint right up the Magnificent Mile en masse, sucking in as much oxygen as possible and thundering toward the first checkpoint. I’d like to talk you through the rest of the race, but after two checkpoints I bumped into Brian Bina, Dylan Davis and the Haitian crew and lost track of things while shredding a nice old spot downtown. Having eventually meandered back to the alley behind the store where there was a sizeable crowd gathered, we watched Rory Melehan and Matthias St. John thrash it out round the block for the alley-cat title, with powerblades-sporting Melehan the victor. The Valo V team video Chicago premiere followed in the photo studio at the rear of THE PULL, sick blading visuals but barely audible with the crowd well lubricated at this stage, thanks in no small part to the kind sponsorship of Pabst and Lake Bluff, and deft hands of bartender-in-chiefs Juan Herrera and Aidan White…

Saturday morning, 6am sunshine blazing down on the streets. Breakfast on the porch with my little ones, soaking up the warmth but not the sunshine, this porch is covered. The Chicago Tribune, neatly folded and bagged, is tossed over the fence onto the porch by our feet. How American. I need a nap.

With Rahm Emanuel at the helm of city hall there’s a new found enthusiasm for cycling. You wouldn’t think it from the looks I’m getting on the blue line headed downtown with my nephews bmx in tow. With Collin Martin at the helm of WCR though, not only because it’s something he cares deeply about, but for very practical reasons including Chicago snarling traffic high on the list, all the Riot spots are within cycling distance and everyone was advised in advance to beg, borrow or otherwise swindle two-wheeled mode of transportation. Pretty much everyone complied; the rest used their blades.

The first few spot were quite public, and Joe and Jane Public were absolutely loving it. It’s hard to estimate, but there must have been roughly 150, if not more, gathered for the Riot, not to mention the street stragglers who stumbled upon Jon Bolino throwing switch 540’s down the stairs, or Jeph Howard and Malcolm Heard getting technical, or David Sizemore getting buck wild! Apart from Bolino racking his nuts on the 2nd spot, not a bad show for a Saturday afternoon on the Lakefront. Despite Travis Rhodes not competing, he hit some sick moves on the Chi-bannisters.

Random as it was, the circle monument was the perfect pitstop, with ample space on the grass for everyone to chill, and the talented few to throw down. Ample too was the view of Lake Michigan just beyond us, the million-dollar boats and the loud parties on those boats as they slinked past nice and slow so we could all get an eyeful. It could have been worse. Spirits were high.

After a very public flat-land/high jump comp at Navy Pier, won by Dustin Werbeski (Xsjado) and later Dwight Harding respectively, the hour & a half beach/lunch break was most welcome. Go for a swim, get some eats, or whatever you need. Come back refreshed and ready for round two (or is it three or four by now..)? Whichever way you look at it, it’s a great idea. It had been an age since breakfast on the porch so Ben Price and I shot over to some grocery store whose security didn’t seem to care about blades or bikes in the store. Meeting the ever friendly Chris Farmer at the banana stall with Teezy in tow was a bit surreal, but we’ll motor on. Next on the list was one of Chicago’s new spots, the high-risk high-reward Viper rail!

Saturday prime time heavy foot and bike traffic using the Lake Shore Drive underpass to get to and from the beach aside, this is a killer spot. The select few took their shot, David Sizemore with the topacid, Jeph Howard with the topsoul, Michael Froemling with a solid x-grind. The only spot actually shut down by the police, but the show moved swiftly along. Dick’s rail was tight, and that’s a difficult thing to even write. The second you land, you have a nice, solid concrete wall to break your momentum. Gets you back to the business of landing that trick after all. Mind you, you don’t wanna end up in the Chicago river.

Vantage points were at a premium here, a few dangling over water, then shifted along again. Nick LaBarre, Sean Darst, Chris McCormick, Thinh Le, Adam Bazydlo, Carson Starnes and Logan Clark all busted out between the tough drop rail and wheelchair rails. Sick as the tricks landed were, Bolino took it a step above by grinding both regular and upper level rails. Ridiculous. Then Sizemore shocks everyone with a supercharged approach, 360 backslide rail tap to gap. Jeph Howard landed an alleyoop soul on the wheelchair rail, over the wall. Shit was getting real, and the crowd was loving it.

Approaching the final spot from the east, rolling along side the Chicago river, the sun was on the retreat. The River rails were the perfect finale, a semi-secluded spot, little foot traffic, opened facing the river and Lower Wacker Driver on the other side, the passing tour boats were intrigued. With instant attention from the petite security guard dissuading no-one, Sean Darst, Jeph Howard, Sizemore and Bolino dropped the hammers, with a neg-acid from Farmer for good measure. Bolino and Darst owned this spot though.

Later on, back in the alley behind THE PULL, Paul Alanis’ barbecue was in full swing, with the smell of freshly cooked pattys wafting through the warm summer air and over the crowd, the beer was flowing once more. The P-rail got a solid session, the high-jump finals were held, and the democratic text message voting system fairly saw John Bolino crowned winner of the 2013 Windy City Riot and the $2,000 prize purse. Fuck yeah!

Later, in the VFW on Milwaukee plenty deep and meaningful conversations about blading and the meaning of life took place, well into the small hours of the morning. Maybe. That, and the shonky karaoke getting a whirl, with Gabe Talamantes and Thinh Le . Somewhere between 4am and sunrise it was time to split and get the blue-line home. Rattle rattle, bang bang. Where the hell’s my bike?

The aftermath saw some sore heads, and gentle cool morning air, such a welcome respite. The Haitian van was half loaded, but the lads were staying a day or two before heading back south to KCMO. Energy was low, but reflecting on a solid few days the event couldn’t have gone any better. Collin was proud, deservedly so. An awful lot of behind the scenes work went into organizing this, unpaid and all for the love. That’s always the motivation. To create something rad which will be appreciated. It’s an odd set of circumstances which came together enabling me to be in the US for my first ever Windy City Riot… it most certainly won’t be my last.