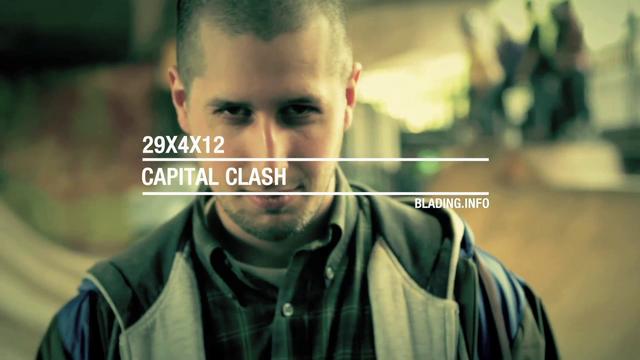 Blading.info at Capital Clash 2012 from Jordan Maders:Camera/Editor on Vimeo.
The Capital Clash is an event organized by UK legend Blake Bird. Jordan Maders went there to cover the event for Blading.info.
Capital clash 2012….. This was the best so far from Blake Bird and rollcam, a new A box was built and a turnout which would of made most independent competition jealous. The vibe of the event was fun and everyone was up for a good day at bay66 London, with bladers traveling from Manchester, Glasgow and the coasts for this event. Capital rollers where well in focus, James Bower being the peoples champion throw crazy tricks on the square drop box. Swain came up with the showmanship after a few months out with an injury. SSM rider Joe Atkinson was giving the crowd some creative hammers with a soul up the box huck a railing to fakie Rollin the rolling. James and Elliott Stevens took best trick, Elliott did a disaster top soul on a square rail (the gap is no joke) and James Bower did 360 sav on the drop box. Swain took the win with Joe Atkinson in 2nd and Dan collins in 3rd.
Video and words by Jordan Maders