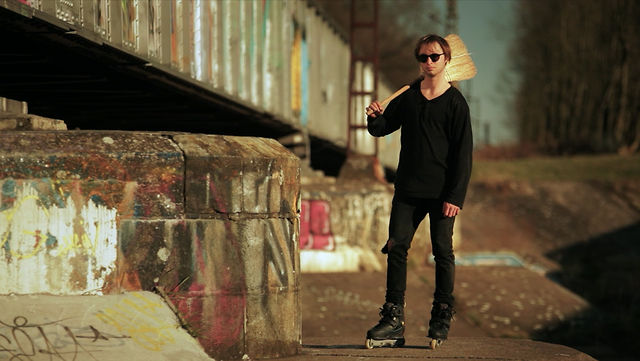 Denis Wolf: One Minute One Spot

I’ve known Denis for about a decade now and he has become one of my closest friends. I know him as an open-minded and relaxed guy, but when he puts his blades on, hes really on fire! Denis is not as extroverted as other skaters or a man of many words. If you spend some time with him though, you quickly realize that he expresses himself through his unique skating and style. I can say that hes possibly one of the most pleasant skaters to work with because he’s always motivated to give his best for projects he’s interested in and he’s able to repeat his tricks until he  as well as the videographer  is satisfied. You can also always count on him for a session just to have some fun. If you saw him traveling across Germany and some parts of Europe over the last years, you’ll probably have noticed that he stands out from others. If you haven’t taken notice yet, I’m sure you’ll see much more of him in the near future.
https://vimeo.com/39392215
Introduction: Nils Löster
Edit: Benjamin Büttner
Name: Denis Wolf
Age: 22
Hometown: Karl-Marx-Stadt, formerly known as Chemnitz
Sponsors: USD
Current set-up: Don Bambrick Carbon 3’s with Ground Control Featherlite 2 frames and Undercover Jeph Howard wheels
Best rolling edit you have seen in 2012 so far: Not exactly released this year, but ‘Richie Eisler vs. Barcelona Spain‘ shows us where skating is headed and how much Richie’s skating has evolved over the past years. It’s such a motivating edit that wants you to go out and shred the streets immediately!
Bad habit: Smoking. It’s simply useless and unhealthy.
Hidden talent you have that no one knows about: I’m so lazy when I get home but I bet I will clean up my room faster than you! That is a long term goal I’m continuously trying to improve.
Your mother always said: “Denis, please go to bed earlier today!”
Skater of the year so far: That’s a tie. Alex Broskow, as he continues to be a top rank skater and his skating is aesthetically pleasing to the eye. Also Richie Eisler, as he is doing cool tricks and his skating skill developed so much over the last couple years.
Favorite food: Chop suey with chicken
What’s your biggest weakness: Sitting still for a long period of time is disastrous for me! So while being in school this was a real pain.
Craziest moment in skating: My first drop-in at Chemnitz’ infamous skate spot “B-Plan”. I like the feeling of adrenaline flowing through my body.
Favourite gadget: iPod shuffle, because it just won’t break and still works after a whole bunch of slams my body is still suffering from.
Find more ‘One Minute One Spot’ features on Be-Mag here.
Your favorite pros’ favorite products. Support Be-Mag by buying at our very own