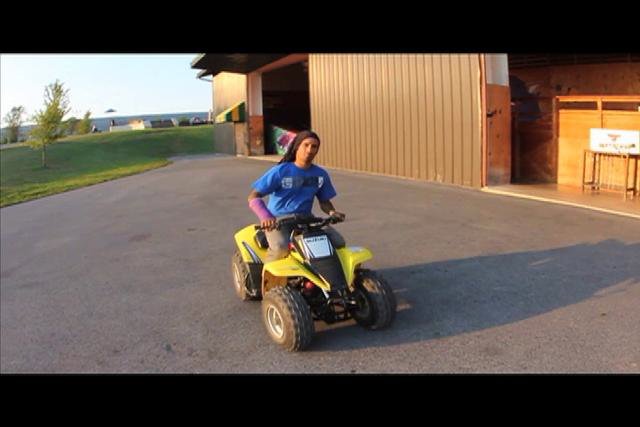 Franky Morales: One Minute One Spot

When we started the One Minute One Spot format on Be-Mag, we knew Franky Morales would like that kind of format. We had no idea that Franky would provide a hammer edit like the one here – especially in the face of the fact Franky got injured right before filming for the edit. But this is Franky, one of the most popular icons of our sport’s culture. Nothing can stop him to throw down his hammers.

As I head up to work at Woodward Camp in Pennsylvania, I couldn’t imagine that I would be spending the next two weeks “lurkin’” with Franky Morales. Franky is world renown for his outgoing personality and unique trick styling on the blades. He certainly didn’t let these characteristics down. Franky is an entrepreneur and an absolute success in everything he does. But most of all he is an all around good dude.

Franky Morales is the definition of a professional skater and an asset to the Woodward community. Throughout the weeks spent with Franky, he has been very enthusiastic about his involvement with the camp. Franky would attend demos, hang by the blading cabins, and even sponsored or judged some of the events.

On the third day of working at Woodward, Franky broke his arm on a death-defying stunt in “The Cage.”  As he attempted to jump out of the OSI deck, over a railing, and about 20 feet down into a flat ramp. As he flew over the railing and out of the deck he clipped his front wheels and was beginning to dive head first into the cage. As he was falling he managed to do some kind of ninja move to save himself; as he put an arm down on the railing and hurtled down to the flat ramp. Unfortunately this epic save ended in all of Franky’s weight landing on his right arm. Despite this minor set back, Franky continued to kill it at Woodward for another week and a half.

When Be-Mag contacted me to do a One Minute, One Spot with Franky Morales I was a bit reluctant at first due to his injury. Needless to say, Franky went hard for the edit. I didn’t have much time to spend with him due to his injuries and our conflicting schedules but Franky still managed to throw down hard.

This is One Minute, One Spot with Franky Morales…and you know it already, it’s mindblowing!

1. Name: Franky Morales
2. Age: 27
3. Hometown: Miami, FL
4. Sponsors: REMZ, Jugs, Ground Control, Psyko Clothing, M1, Renegade Bearings, Studio Center
5. Favorite skate event you attended so far: IMYTA Puerto Rico… Year? The place, the culture, the people, the weather. Waking up to the beach and great food every day… It was pretty fucking awesome.
6. Best contest results so far: LG Championships 2008
7. Three characteristic features that describes you the best: Unique, Entrepreneur, Swag
8. Current set-up: REMZ HR Team, GC Featherlights, M1 Wheels, Diamond Out by Milo Lagon
9. Best rolling edit you have seen in 2010 so far: “I’m too busy to watch videos.”
10. Good advice you’ve been given: “Just do you…”
11. What is your favorite section that you have put out: “Future of Rollerblading 2. It was my first major section… It put me out there.”
12. Best thing you did in your life so far: “There are so many things I can say… Made a lot of money skating, been in a video game, traveled the world, met a lot of cool people… And so on.”
13. A place you really want to travel to next: “Cuba… See my heritage and shit”
14. Three people you would love to skate with at your favorite spot: “Lil Wayne, Goku, and Louie Zemora… We would skate The Hyperbolical Time Chamber”
15. One Amateur who should be pro: Cody Porche