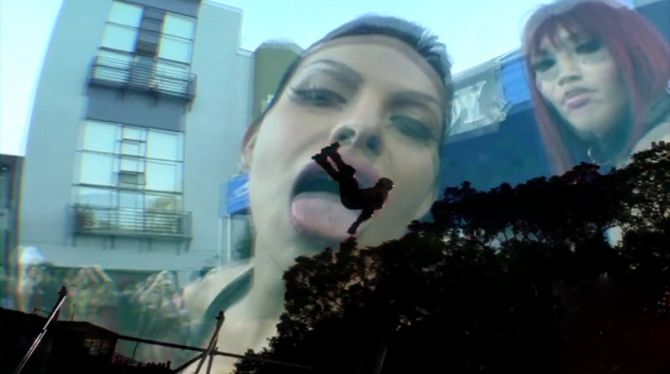 The Shock Posse themselves are about a strange mix of a group as the video. To understand them helps to better understand their videos.

On the far other end of the spectrum, you have Kevin Yee, a quiet Minnesota native who practices art, yoga, and meditation, all philosophies than translate to his skating. He’s one person whose natural facial expression is a smile.

Then, somewhere in the middle you have John Vossoughi and Thomas McGovern, the embodiment of the flowing California skate style and youthful optimism. They should be brothers, but even different parents couldn’t keep them apart.

The group all shares a love of shredding and challenging people, either by getting right up in their faces or merely asking simple questions. There are few sacred subject to them, the website, or their video.

“We made the video to show we don’t care,” McGovern said. “No one wants anything to do with rollerblading.”

Over three years, a charge held mostly by Yee, the group pieced together more than a hour of skating that included a deathly heroic opening section by Derek Henderson, a spoken-word poetry themed section from Jay Greendyk, a garbage-scavenging location shot with Anders Carlson-Wee, and more sections than any other video. Ever.

Shot with 10 different cameras and edited with 10 different styles of music, the SHOCK posse wanted to stray away from the sweeping trend of HD video and polished editing styles. It’s grittiness in filming, editing, and content was completely intentional to showcase the rawness of rollerblading.

“It captures my experience with blading, with all the weird people I meet and their styles and their different music tastes,” Vossoughi said. “It’s about the diversity and weirdness of rollerblading. No one captures that because rollerblading is so exclusive. You can’t get in a video unless you know someone.”

Few videos today show such a hedonistic look at the society that surrounds them while they skate. The drug-addled homeless people used in video trailers live nearby skate spots. It’s as if the video’s B-roll doesn’t try to take out the garbage, but rather dig to the bottom to see what’s there, something unintentionally explicit as Anders Carlson-Wee scours for breakfast in dumpsters before blading.

The SHOCK Video includes such things as Tommy Boy hitting a leather-masked man repeatedly in the testicles with a crutch during San Francisco’s S&M-themed Folsom Street Fair, and a man being stomped to death on the streets of the city’s Mission District.

These are all parts of the SHOCK posse’s lives, and they wanted to show off what they’ve seen.

“We all felt blading needed a kick in the dick,” McGovern said.

The skating itself involves an abundance of non-traditional spots, a heavy theme in all of the SHOCK posse’s skating styles. Yee, however, stands out as the champion of the non-traditional.

“I wanted this section to be my magnum opus. I wanted it to be my masterpiece. I was skating with a death wish,” Yee said.

During the filming, Yee, Tommy Boy, and Hayden Ball all broke their legs. Tommy Boy broke his twice.

It was the last three months where everything came together At the premiere party, well, things fell a part for a second. There was a bar fight and some pissy little British guy lied through his teeth to the cops and that landed Vossoughi in jail on felony charges. Now settled in court, the event was the picturesque end to the project – a long beer-soaked battle to do something fun and creative and a couple of douchebags had to go and start some shit.

The overall response to the video – or at least the loudest voices on the internet – was what they expected: as it wasn’t a “video that meet a certain checklist and wasn’t shot in HD” that few people would accept it.

The video wasn’t meant to be an artistic expression about the modern age of rollerblading media, it was a distorted documentary into the lives of rollerbladers across the globe. Maybe that might be too in-depth for something that has so much fun poking fun at everything, yet it still manages to show a side of rollerblading that isn’t in super slow motion set to dubstep featuring bladers who get their eyebrows waxed.

“It has so many extremes. People are talking about the shocking elements – the trannies, the murder. There’s still Jay G’s section. He made the music and its his poetry,” Yee said. “It really celebrates rollerblading and it does it by taking everything to an extreme level.”

But, to those who made the video, especially Tommy Boy who said he wanted to make the most vile rollerblading video ever made, did they think they achieved in making the SHOCK Video shocking enough to live up to its name?