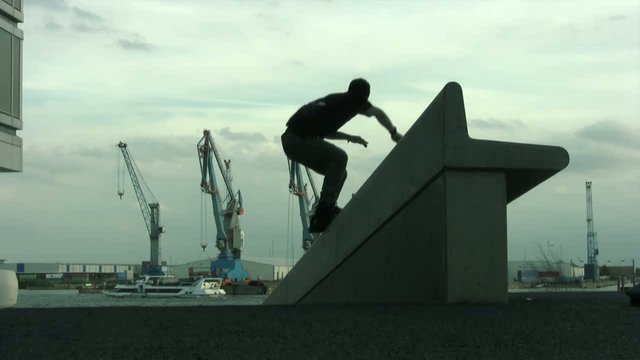 When people think of the skate scene in Hamburg, they can usually only think of the I-Punkt Skateland or the annual X-Mas Jam that takes place there. But the amount of real street skating coverage is very low. For the last decade there hasn’t been a skate video based on this city. So this year it was time for a change!

In April we had the first few sessions of filming, not quite knowing what kind of video it would be in the end. I soon realized that creating an exciting video which is strictly filmed in one city is quite a challenge. Since everybody is usually more motivated while being on tour or just in a different city, the attitude here can sometimes be like “Whatever, we can still do it again next time…”. However, the next time usually consists of rain, since that is the weather we’re getting a lot in Hamburg.

But still most of the time everybody was motivated to go out and skate. Especially Maurice Regnaut and Alex Deutschmann busted theirs asses to get good footage. I guess this constant filming got a lot of people moving. The whole scene was skating more street than park throughout the summer which is pretty unusual for Hamburg.

So it happened that we often filmed big sessions at some smaller spots. As for the more difficult tricks and spots, the usual skating-just-to-get-the-clip worked much better though. At the end of the day almost everybody managed to get their shots done and most importantly had a good time skating. All this is now summed up in Beat Control, a video of practical length for the internet’s short attention span.

Thanks to all the skaters for letting this project happen and also rollerblading itself, because, as Brian Shima would say, it is „undeniably sick”.

Now turn up the volume, click on HD and enjoy!