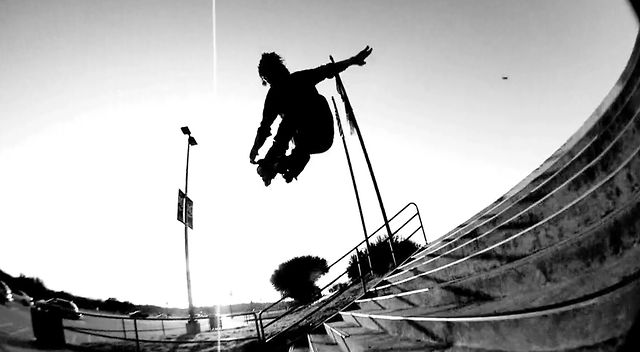 Mr. Brian Moore, seasoned OG, how young are you these days and how long has Rollerblading seriously affected your existence?

What is it with the Dallas Fort Worth metro area scene? We all know Dallas is home to some of the freshest spots in the lower U.S., too!  Fill us in. What is Dallas to you? What is Dallas Rollerblading?

Dallas Fort Worth is like an underground mecca of street skating. So much to skate, so many people to skate with. Even if it were possible to find all the spots to skate in Dallas, we would still have Fort Worth to search, which is neighboring city that’s populated but millions. And there’s a crazy amount of construction in both cities. It really feels like we have an unlimited amount of fresh spots.

Can you tell me what it’s like having the arsenal you guys have as far as the DFW area roster goes, and being just as good on blades as well as holding down the filming/media game behind the lens. How hard is it to film and get other cats to film you do your thing? Do you enjoy one maybe a little more than the other?

What hypes me about this video is that while technically it’s a local video, it doesn’t play like a local video. Every dude that has a section, has a section not because he was simply available to film a part, but because he brings something fresh to the table that the other guys don’t. It’s really a team video at heart. Every rider’s section has their own unique style and method of skating, which brings a fresh, new perspective to every section.
As far as me holding it down on blades. I don’t know man, I like to skate, but that’s about it these days. The real joy comes from lacing the filming while the homies lace the tricks.

If you were to sit someone down in an effort to educate them on what “Rollerblading” is, which shredder, past or present, would you show them a section of and which section would that be. Just trying to get a taste to what kind of blading you like to watch and think is truly proper.

I don’t think there’s any one shredder I would use to portray blading. I would focus more on the media I would show. I would show them the best video out which is ‘The City Never Sleeps’, duh. By the way, you can buy it here.
That was a shameless plug, but honestly: a lot of people create their videos with the “by the bladers for the bladers” theme. While I do respect that – I made this video for me. It’s weird that I made a skate video because I hate skate videos. They mostly seem like the same amateur cookie cutter wanna be skateboarding videos, excluding a few. I made ‘The City Never Sleeps’ to be unique, and it may or may not be to you. But I enjoy watching it, and everyone in the theater at the premiere seemed to be having a good time, screaming and cheering for the bladers. So ‘The City Never Sleeps’ is exactly what I would show someone who doesn’t skate, and I’ve done so many times.

You just recently premiered your – in what I call – a blading vid game changer, ‘The City Never Sleeps’. It was held at Angelika Theater in Dallas. How pleased were you with the turnout and the overall reaction of the film after it came to a banging close?

Haha, I don’t know about game changer, but that night was awesome! We pretty much packed out the 300 person theater. I remember one of the pivotal moments in my blading life was at the ASR Trade Show the night before the San Diego IMYTA in 2001. I walked into Beau Cottington’s ‘UNCLONED’ premiere and I couldn’t believe the atmosphere in there! If anything in my life really pushed me to make blading videos, it was that moment right there. When I premiered my video, to hear the crowd and feel the energy in there, I forgot about all the trials and tribulations that I myself, and all the guys in the video went through during the two year journey to make the film. We went through a lot of really tough times to get it done. And when it was complete and we were watching on the big screen, I don’t think one person involved had any hint of regret.

I personally dug the fact that Demetrios George was posted up in front of the theater slanging tickets before the premiere. He told me he filmed his section in about 10 days. How did the whole prospect of Demetrios even come up to be in the video? Also, who did you enjoy working with the most as far as actually going out and getting shit done goes?

Demetrios is awesome. He’s a genuine dude who is down to help other people. I dig that about him. Actually, he decided to fly out last minute, and in 10 days, we put in some work. He’s unbelievably professional, right up there with the best of ’em. He is one of the best, without a doubt.
As far as being my favorite dude to get work done with… That’s tough because some of the guys are so professional and just go out and get shit done like Keaton, Demetrios, Glow and Brady. John and Fritz are out to have fun – and handle shit – but it’s always gonna be a special session if they’re involved. Mason is just a clip machine. Demetrios filmed one of the best parts in the film in 10 days. Well, Mason filmed one of the best sections in the video in about 2 and a half… weekends. That kid is going places. I have never seen talent like Mason has – and he’s still in high school!

I know you’re still working on finishing up a few things, but can we look forward to witnessing another quality B-Mo flick? Any insight on what you might have on the brain? A tour perhaps?

One thing at a time homie. Europe tour would be awesome though. It all depends on how this video sells. If it does well, you can bet your ass there will be another video. And you won’t have to wait 2 years for it.

Does rollerblading feel stable to you right now? As if better things are to come. Media? Industry strength? Innovations? What do see happening to rollerblading in 5 years?

Well, I don’t really see worse things coming. I don’t think that’s really possible. With the talent and unique bladers in our industry right now who are dedicated to blading like Haffey, Farmer, Broskow, etc., I only see good things happening. These guys are out there saving our sport and livelihood, and if you see them you should thank them.

Yea, Shout out to anybody who’s gonna buy the video, everybody who came to the premeire, everybody who was down to be involved with the video, my family and friends. Rob for conductiong this interview. And finally Jason McFadden. This whole project is dedicated to you. Rest in peace, brother.

‘The City Never Sleeps’ on Bigcartel