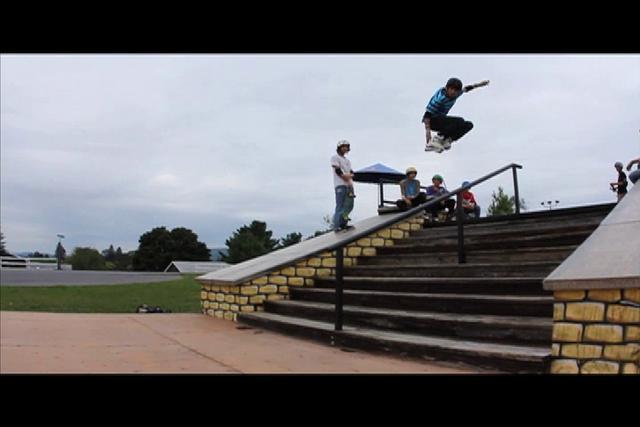 The inline side of camp has always been subjected to the ever-growing popularity of skateboarding. Camp Woodward Head Director Michael Bennet and Inline Director Eric Shadel are leaders who continue to prove that the rollerblade numbers are constantly growing. Every year the camp pulls more and more bladers and these guys are to thank for that. As Inline Director, Shadel organizes events and maintains a strong and growing rollerblading program this year Shadel brought teams such as SixWonSix and Denial to shred with the campers and some of the industries most impressive professionals. He is constantly finding new ways to bring interest to rollerblading and continues to be a vital inline representative to the Woodward family.

Along with the Inline Directing and Counseling Staff, the camp hires a very talented and impressive media staff.  Andrew Nemiroski, currently attending Boston University, was staffed as a fulltime photographer for not only inline but all sports offered at Camp Woodward. Nemo is not only a renowned photographer but also a competitive amateur skater and creator of the wonderfully unique blade film titled “Killin It”. This just goes to show how talented some of the world’s rollerbladers are.

As for film crew, Woodward invited videographer, Dave Fitz, of Long Island Rolling. Dave showed tremendous support filming the camp’s most outstanding camper, amateur, and professional bladers for the ever-impressing Colony of Summer video; offered each year by Woodward Camp. Fitz is currently studying and filming in Italy and continues to deliver some of the most notable footage and distinctive editing I’ve ever seen.

Eric Shadel and the Directors Staff also invited industry entrepreneur Adam Killgore to spend the summer along with his Denial Clothing skate team. Adam hails out of Philadelphia, specifically seen around Neglected Truth Skate Shop, and is owner of Denial and Dub Caesar. While the team was in and out of camp, Killgore made a point to stay for several weeks and show his support for the industry. He showed immense support by donating product for competitions, judging events, and even skating with the campers. Killgore devoted his time to Camp Woodward simply because he is a true believer in the sport.

Although Killgore showed tremendous dedication this summer, he was not the only industry support at Woodward East. Several other rolling companies such as Con.Artist Brand, Scribe Industries, SixWonSix, REMZ, Twenty-Six Letter Clothing and Bitter Cold Showdown sent products to support the campers with handouts and contest prizes.

Amateurs from all over the country came to show support and work as Woodward Inline staff. Blake Kelly, out of Tampa, Florida, visited Woodward East for a couple weeks this summer. His enormous trick vocabulary and outgoing personality make him a model instructor for the kids at camp.  He is devoted to teaching the campers as much as he can whilst shredding hard himself. To my surprise, Blake has no boot sponsors. He skates for the love of the sport and leaves an impression everywhere he goes. This dude deserves more recognition and appreciation for his skating.

Another outstanding amateur, who visited Camp Woodward East for several weeks this year is, Baltimore rolling native, Dan Breuer. Dan is currently attending Towson University, in Baltimore. This year he devoted four weeks out of his summer to hang and instruct at Woodward East. Breuer is known for his textbook trick list. He is the master of tech and truly an asset to the Camp Woodward Staff. Stay tuned for big things coming from Dan in the near future.

Besides the staffing some of nation’s most talented ameteur skaters, Camp Woodward also invited some of the biggest names in professional rollerblading. While I was at camp I met up with good friend and world renown vert skater Thumper Nagasako Thumper lives in Pennsylvania close by to Camp Wooodward. He works hard managing his own video production company and spends any free time skating both vert and street courses throughout the Woodward campus. Throughout the day he is always eager to spend time helping kids with skating techniques. Check out Thumper Nagasako’s company Hi Focused with their amazing DVD Highrollaz available on Highrollaz.com.

This year, Woodward also welcomed 2008 LG World Champion and one of the most successful rollerbladers in history, Franky Morales. Franky visited camp for several weeks and can be found on campus shredding all day long and doing anything to support the industry. He had made the commitment to visit camp this summer and leave his beautiful home in Miami, Florida to spend time training and being a part of the Woodward family. Morales left camp the week of August 13th in order to catch the SDSF Open 2010 out of Escondido, California. Be sure to keep and eye out for big things from Franky Morales both athletically and musically.

While working and filming at Camp Woodward I had met some of the most impressive and ambitious advocates in the blading industry. But the most impressive of all is the future prospect of rollerblading, the campers. The inline campers were full of future filmers, photographers, and some of the most extraordinary and talented skaters. The campers are the forthcoming of the sport and Camp Woodward is a huge player in the development of the ongoing maturity of the inline industry.

My time filming and shooting at Woodward was not only spent with the nation’s top amateur and professional skaters but also Woodward East’s most brilliant campers. So be sure to check out Zach Pavel, fourteen years old and out of Houston, Texas. He is featured in the Woodward Camper Spotlight at the end of the edit.

This is the present and future of rollerblading.
This is Camp Woodward.