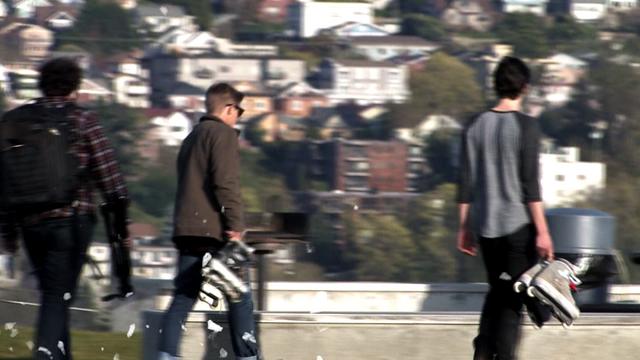 Whats up with all this NDN stuff going on?

All this NDN stuff is the product of a bunch of good friends having fun on and off their blades.

Where did NDN come from?

The NDN came from a doodle when I was bored at work. I sometimes write in a busted-up, personal version of shorthand where I just leave out the vowels in words. I was shorthanding “indian” onto the doodle when I noticed it was ndn… still reading as “indian”! Thought it was sweet, plus I find some types of indian art/history/culture to be really interesting. And I’m a lil’ bit indian myself! Oh, and the whole IRS thing that I’d rather not get into…

What is The NDNs future?

Everyone involved is dedicated, talented, and progressing. So I can only assume the future will be bright. Definitely getting more people involved as well.

There seems to be alot of Utah guys in this video. Over the last few videos you’ve had more and more Utah heads involved. Why?

I have a few really close friends in Utah that happen to be sick on the blades and 100 % down with The NDN. So that just happened naturally.

Why did you choose these guys for parts?

Well I’ll start by saying that everyone with a part is reaaally good at skating and a close friend of mine. So, that applies to all of them. But on top of that you’ve got a rich history. Got nothing but respect for you. Always keep your blading interesting. Dan Dickerson likes for me to request tricks and then he does them. He’s always down to blade day in and day out! Powerhouse. Jeff Stanger was originally going to hold down a montage in the video but he ended up pushing for a part. Him and I are both really glad that happened. Keeps it fresh. Erik Bailey is one of the sickest in the world. We’re always blading together so it’s convenient to get shit done. An NDN deal wouldn’t be right without him! Like with Erik, I’m always blading with Phil Davidson so it also comes naturally. Phil suffered from the most disgusting head injury I’ve ever witnessed and came back ten-fold. Nicholas Swan is the king of smooth. Interesting blading. Great man! And I simply love to boot and I’m obviously always present on a session.

In your opinion, who’s going to shine in this video without having a full part?

Ross Kuhn’s shit is real good. Everyone did a good job… Geoff Phillip.

Who’s your up and comer of the video?

That’s a tough one. There are several peeps in the vid with no sponsors that would love to help represent the companies they believe in. So I guess it’d be those guys!

Have you done any traveling for it?

Just some quick trips to UT, WA, OR and CA. I aimed to mostly film in Boise because I wanted that home feeling to the video.

Were there any bad injuries during the filming of Dayshapes? Who and what happened?

The worst was definitely Chris Olpin sliding out on a switch mistrial on a down rail. He ended up knocking a bunch of his teeth out and shattering his jaw… Be careful.

Do you think this will be your biggest release of all your videos? Best video you’ve done?

Any technical problems while making Dayshapes?

How long have you been filming for Dayshapes?

We started filming for Dayshapes right after “I Was A Cloud” came out and that was 15 months ago.

When and where is the premiere?

The World Premiere is in Boise, Idaho on April 30th. Check out the facebook even page here.

There will be other premieres announced as well, if you’d like to hold one contact me at and we’ll get something set up!

When will we be able to purchase it? Will you have another Blu-ray/DVD release?

It will be available for purchase on DVD and Blu-ray April 30th. You can get it from your preferred skateshop or directly from The NDN.

Check out the NDN for more info. Get the video at the Be-Mag Shop.