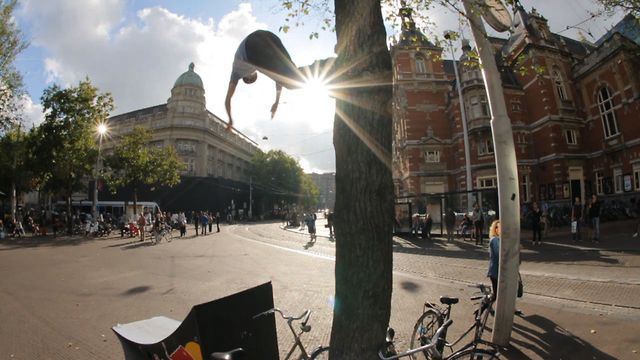 This is when I decided we needed to make this CITYHOPPER thing into a documentary as well. And who better to explain to the non skating people who are interested in it, but do not know where to go for good blading content than the star of our show: Sven Boekhorst.

Of course this meant having to introduce him to our viewers, who are not aware of Sven’s OG status in the Rollerblading game. This is where the first Dutch Inline Skating Champion came into play. Growing up skating in Den Bosch and Maaskantje with Sven and his brother, Tim Haars was the perfect candidate to introduce Hollands #1 skater to our viewers. The fact of him being an accomplished actor also helps a lot. Sven’s brother is also an actor, and has starred alongside Tim Haars in a TV series, as well as two box office hit movies, ‘New Kids Turbo’ and ‘New Kids Nitro’. Needless to say, Tim can hold his own on skates, and knows Sven from before grinds were even being done on rollerblades. So there was really only one guy who could tell the story of Sven’s growing up in the hood.

We go down memory lane and reminisce about the days when rollerblading was still in its infancy, and Sven explains what kind of shenanigans he was up to during the CITYHOPPER+ tour. Going around with 12 guys, a ramp, a bunch of cameras, cranes, helicopters, mopeds and brilliant weather amounts to a few good stories.

And all this madness went down just so Sven could test his new skate. Available at only the best Rollerblading shops, from the start of March. Please check out this project, made possible by the CITYHOPPER crew.