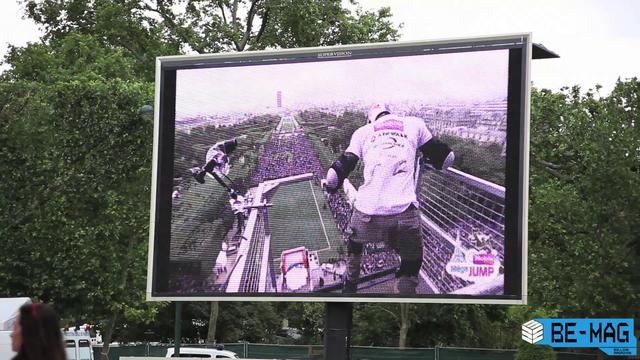 This jump should set up a new Guiness World Record. This past weekend (May 29th 2010) Taig Khris did the jump in front of 20 000 spectators cheering for this crazy man. And he broke Danny Way’s record ! Anthony Finocchiaro was in Paris to provide an exclusive Be-Mag story about this media frenzy!

This past weekend (from the 28th to the 30th of May) all eyes were on Taig Khris as he planned to set a new Guiness World Record: a jump from the first floor of the Eiffel Tower into this huge quarter. When I heard about this some months ago I knew I had to show up at the event to witness this special moment. Besides that, the Eiffel Tower is pretty close to my home.

During the weekend, in addition to Taig’s jump, there was a mini competition and a big ramp demo. Unfortunately, the setup left something to be desired in this competition, which was a big part of the programme all along the weekend, you saw that all the effort went into the preparation of Taig’s jump.

During the big ramp demo, we had the chance to see former riders like Gustavo, Angel Monsalve, Neil Martin, Lamine Fathi, Sven Boekerst or Zoola..  and on the mini, we have parisian riders, suggested by PMG. Rollerblade was at the party too, with a huge stand where we met Rob Guerero, Greg Mirzoyan and the rest of the team.

The Rollerblade Team in Paris to support Taig Khris

On Friday, I attended the jump preparation, i made as many pictures as possible because I knew that i would not be there on saturday. Luckily, I saw the jump on TV.

The big and scary moment

Rumours said there would be a new jump on Sunday, and so I decided to go. On the spot, not much, nothing suggests that there was a world record the day before, we only heard different opinions in the public about the validation of the record. Taïg finally didn’t jump on Sunday, he spend the day with the press, and signed a lot of autographs, I took this opportunity to interview and film the jump shown on the big screen, failing to have seen it in reality. Taig has a lot of projects, he told me he wants to engage himself in other records, we do not know much for now, let’s see what he comes up with in the future.

Check out the exclusive interview with Taig Khris here:

Exclusive Taig Khris interview for Be-Mag from Be-Mag on Vimeo.

Also check out the official video of the jump here: