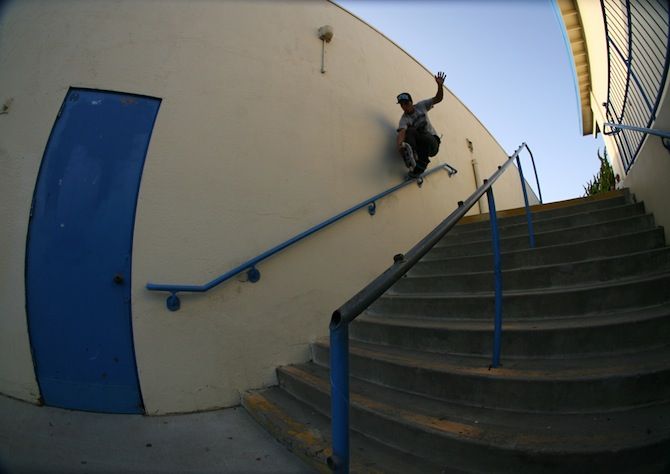 Now Playing: Children Of The Future

Now don’t get me wrong, but being predictable isn’t necessarily a bad thing. With each release, Razors team videos have accustomed us to an incredibly high level of skating and exposed countless great talents to the face of the world, leaving a distinctive mark on blading as we know it today. In that sense, Children Of The Future is pretty damn predictable. It’s simply everything you’d expect from a Razors production.

For his first full-length movie, Erick Rodriguez didn’t bother with too many details. Besides some voice overs, a couple personality shots here & there and the occasional time lapse, he made the point of the video very clear that this one was about skating and skating only. Although I’m usually not a big fan of this principle, I reckon that featuring what seemed like 40 different rippers in a 50 minutes flick probably didn’t leave E. Rod with too many options. The soundtrack was a bit more diverse than what most people would assume, and it flowed quite nicely with the whole thing. There’s no real soundtrack highlight though, the music was just background noise for the cinematography. Here again the real focus is put on tricks and it seems that E. Rod relied mostly on the skating to keep you entertained and watching through the whole thing.

Straight to the point then, let’s talk about the skating itself. Well, I’m sure you can imagine what kind of shit such a pack of hungry young wolves were capable of when filming for their boot sponsors team video. Filled with (really) technical skating and a whole bunch of crazy hammers, these guys sure didn’t take it easy. Here again it’s hard to pick a highlight, as there are just way too many of them to keep track of in all the sections. Noticeable parts go to Alex Burston with a surprisingly good profile, Jeph Howard & Fabio Enes who both go real hard, and Prince Aragon with an ender section full of heavy hitting tricks, as usual. Newly promoted AM Howie Bennett and Pro Korey Waikiki both have full sections as well, and as for the rest, I will let you figure the it out for yourself.

I hope nobody feels left out because I didn’t put their names in here, there was so much packed in this flick that the best advice I could give would be to pick out your own highlights and share them with the world in the comments below, or in the appropriate thread on the messageboard. I’m sure you guys will do a much better job than me, so don’t waste any more of your time and get COTF now! Razors made it a point to showcase almost everyone in their team, covering more continents than any other video this year and in that sense, this flick in undoubtedly successful. It’s pretty damn predictable this video will be an instant hit all over the world.

Now available at your favorite shop.