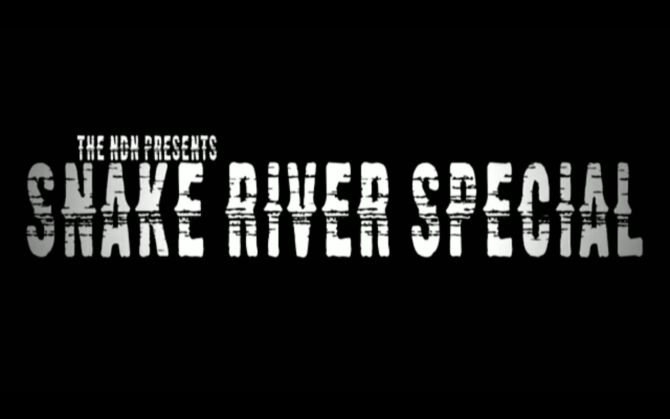 The best part of the New Year is always having time to spend your gift card money or actual money wisely. My Christmas present to myself this year was getting the Snake River Kyler Martz T-shirt to go with the DVD. Sometimes I like to be treated fancy. So sue me.

Both are solid pieces of art.

There’s a lot of good hometown skating, as evident by the array of obstacles you can tell have been shredded numerous times during the great hometown seshes that go down everywhere: angle iron ledges, ditch rails, well waxed spots, and worn in rails.

Then there are the weird spots where you can tell local skaters are putting in the effort to find new spots: electrical boxes, rubble-like landings, filing cabinets, and garbage cans.

You should do yourself a favor in this treasured new year by picking up a copy of Snake River Special. It’s a great scene video filled with cameo clips from everyone from Jeff Stockwell to Leon Humphries.

Here are some highlights…

Erik Bill is a director blader so he’s got his fair share of clips in there. He is a tall Blader, an affliction I can sympathize with. From one tall blader to another, he blades the way I wish I could. It’s enjoyable as hell to watch.

Bailey has been my favorite skater for a decade, but if you’re looking for those Regardless, Valo 4Life or other keepers of Bailey hammers, you’ll be bitching online about it. If you want to see one of blading’s most solid skaters in comps, videos, parks, or streets skate his hometown like you do when having a good sesh with your friends, then you should buy this video. His spot selection, energy, and skill is highly exemplified in this video and Erik Bill does yet another great job of showing off Erik Bailey’s talents.

Jeff Stanger is a great guy. If you’ve ever met him, you know that last sentence is an understatement. Besides being a damn good dude to chill with in person, he’s also an enjoyable person to watch skate. He has a complicated style about his skating that I love. In one part, it’s a bit of the awkward white guy thing we commonly share, but it’s also that incredibly stylish heavy foot that can easily be compared with Louie Zamora. As he’s a humble and awesome dude, he’d never allow himself to be compared with Louie, but as a fan of diverse skating styles, I can see it in there.

One thing the video could use less of is all the people hitting their head. None of them were that bad, but the hell if it doesn’t make you think twice about it the next time you lace up.

Other than the chilling effect of watching people obtain too many head injuries, Snake River Special is an awesome video you should support by buying a copy. Get that Kyler T-shirt, too. Shit’s nice.

I’ll make it easy for you and leave this here: http://thendn.bigcartel.com/