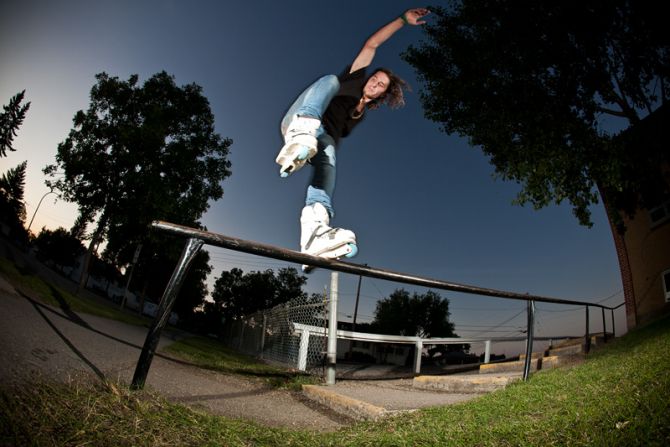 Opening the archives on Imagine Blade Shun with Dustin Werbeski

Introduction by Kevin Chow
Photography and text by Dustin Werbeski

What is Imagine Blade Shun & why haven’t you seen it (yet)?

Simply, it’s a Canadian skate video. Shot in 2009/2010… & is just now being released in 2013. It focuses on the individual perspectives & imaginations of Todd McInerney, Leon Basin & (myself) Dustin Werbeski, along with other creative Canadian friends like Matt Ledoux, Sean Knight, Shaun Unwin, Danny Beer & Josh Silver …just to name a few. Oh, and a couple of international clips donated by Kevin Yee.

Now some background story, explaining the chain of events that led to its creation & long overdue release…

It was Vancouver 2009. At that time, we were all “riding for shop-task”. Coincidentally, we had all crossed different distances of the large country, migrating to the same west coast city for the winter. It was then, that we shared these street sessions that sparked something. These sessions revealed our different realities of rollerblading. We all saw something unique in the same spots, yet we could all jam them together, sharing the fresh experiences & ideas as a whole. It was inspiring & got me to thinking about sharing them with more then just ourselves. (Yes this seems contradictory to the present, releasing it all, a few years later.) But, it was the mindset I was in, and with it came great creative & philosophical inspiration, which I used to make Imagine Blade Shun.

As to details on how it was made…

Half of the film was shot in HD (mainly by AJ Delong), and the other half on classic 3CCD (mainly by me). This provided the very loose structure to the film’s storyline. Where each main skater would have two sections, one in HD & one not. Then the rest of the video would flow around these profiles, with interludes of friends, public scenes, stories and shared sections. All of these parts were dreadidly edited on separate timelines, and just now (for it’s release) pieced together, as the one full-length video intended for years ago.

As to why it took until now to piece it together…

Well, I edited the film on a laptop which died mid production, and I never received the funds I needed for its completion. My next computer came with the Powerhouse Studios. With it, I was working on a new list of projects, and could never snap back into the “imagine blade” mindset I needed to compile it. It became obvious that it was a special time and space, back in those BC years, one I couldn’t just tap back into at will.

I will wrap this up with apologies to anyone who was affected negatively by the belated birth of Imagine-Blading & thank everyone involved in the making of this timeless capsule of Canada’s skating. Again, it is now downloadable here.  Support skate videos… as DVD’s are growing ever older, and selling them online is the future. ; )

Still not convinced? Take a look at the first two trailers here and here, along with an unreleased teaser here.

Dustin Werbeski – Gap to makio on the wood fence.