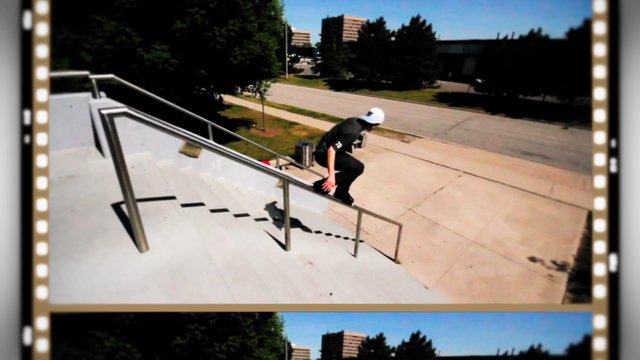 We’re back! It’s time now to take a moment to catch Canadian legend Mike Lukewich doing what he does so well.

If you don’t know who Mike is chances are you’re not from Canada or you simply have yet to be exposed to possibly the most skilled rollerblader our country has to offer since the migration of Richard Eisler the third to far away lands. That being said he has also just returned from an extended period of time off his skates only to come back and step right into his title as if it was devoutly waiting for him.

Street or park, switch or regular it just doesn’t matter to him. This guy reeks of effortless style and poised composure in the most extreme circumstances. Whether it’s jumping back on drop rails, hitting the last trick of an unbelievable line or landing 540° grinds first try in contests that he’s never even attempted prior to the moment. All is kept cool under his fitted hat and his positive personality.

With Mikes comeback there was also a setback. During a hockey game with off season NHL players Mike took a puck to the ankle wich he attempted to walk and skate off for a few days. The nagging pain was soon amplified when the unknown hairline fracture which he received spiraled from his ankle to almost knee height separating his Tibia vertically. Surgery was inevitable and the completion of his section was left high and dry.

When we needed to get something together to show for his efforts and his warm up tricks from the start of the season were enough to work with to bring you this incomplete section. The hammers he had planned will wait for his full recovery and the spots are not going anywhere either. Its going to be a good day when you’re back, Mike.

If you still need proof that Canadian rollerblading rules you need to visit http://rolltoronto.ca. Check back again next week for some fresh skating by Mathieu Ledoux, Sean Knight, Blair Loughead and more.

Have a look at the previous features of “Picture Me Rolling” on Be-Mag here: