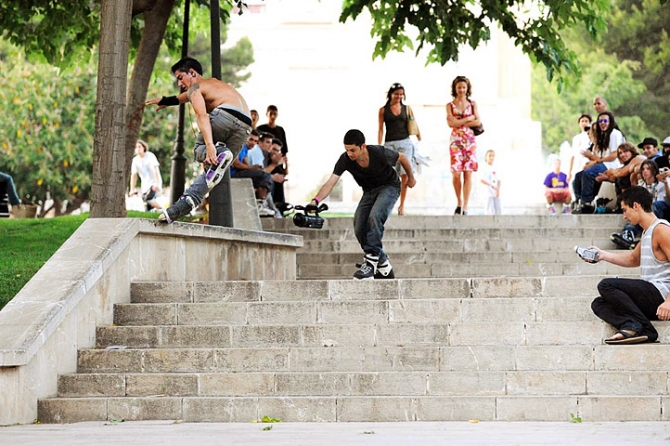 This is it… The most anticipated extreme sports DVD of the year: “Game Theory” The 2009 Razors Team Feature DVD.  Starring Brian Aragon, Mike “Murda Johnson, Dre Powell, Don Bambrick, Stefan Horngacher, Chaz Sands, Matthias Silhan, Romain Abrate, Erik Perkett, and more.  Razors is a leading manufacturer of high end skate equipment.  Together with an elite team of professional skaters they have been setting the trends in both skating and technology for over 10 years.  After signing a deal with National Award Wining Director “Brazilionaire,” Razors will break the bar in standard for media projects in the rolling industry by releasing “Game Theory.”  Check back for updates on GameTheoryMovie.com… there will be Behind-The-Scenes video journals, production notes, pictures, etc.  Razors will also hold online contests to win a free pair of Razors Skates along with autographed gear from Sunshine Distribution.

Hey Brazil we heard that you are now responsible for the Razors team video. Can you tell us what you guys have planned?

What’s up guys, first and foremost thanks for all the love and support, I love working with you guys…  Now onto your question… there has never before been a skating project done at this level or format.  Can’t release too many details yet, but what we can say is that our vision is to make a viable, mainstream-accepted Feature DVD to showcase skating to the world on a grand scale.  This is the DVD you can show not only to your skating buddies, but to your soccer friends, your family, your co-workers, people on the street, etc.

What have you been up to in the last years and how is your background with film?

Aside from my love for skating, these last couple years have been very long a dedicated times working in the film/entertainment industry.  Editing music videos for MTV/BET, working with companies like McDonalds (and even including chris haffey in the mcdonalds project.) I also worked in developing a dance group from chicago called “FootworKINGz,” whom I just finished a feature film with, and within 2 years myself along with their manager brought them from the ghetto of Chicago to world tours with Madonna, Rolling Stone Magazine, Verizon Commercials, and now on America’s Got Talent.  I’m on my grind 24/7 running a multi-media company full time, and pursuing my passion and goals to become a top entertainment industry mogul, and the best editor in the world.

What awards have you won?

Last year (2008) there was a competition at the Chicago International Film Festival for all the filmmakers in the country under 20 years old (i was 19 at the time) I won first place with a music video/short film project I did with McDonalds (which included Chris Haffey.)  I’ve also been nominated 5 other times for the same festival.

Where do you draw your inspiration from?

I grew up in a very artistic family.  Both my parents are world-renowned professional dance (ballet) choreographers and dancers.  My mother was a professional dancer at age 14 and left school to tour the world.  When I was a baby I grew up backstage, watching her dance and choreograph, which taught me how to understand music and the quality of production… Certain things/people/projects inspire me that I just can’t control, I get absolutely addicted to my inspirations and they are like a drug to me.

Michael Jackson inspires me alot; he was the King of Pop, he started young, he did his thing, the greatest of all time.  I want to be his equivalent.

Jay-Z inspires me, he is very talented at his craft (rapping/writting) and is an accomplished business man.  I love the business world as much as I love the creative world, if he can achieve that balance and make $80 Million + a year, then so can I.

Kanye West inspires me above everybody.  Something about him.  Hard to pinpoint.  I’ve met him a couple times, cool guy, and alot of my friends work closely with him in his camp, but aside from that… He is so extremely passionate about his work.  He’s the kind of guy that spends 3 months in the studio editing a 3 minute video (Stronger) so he has the right to say whatever he wants at awards shows.  Every project he does has the “it” factor.  I’ve watched him come up from chicago since the late 90’s, and now he is claimed by Rolling Stone Magazine to be the only new Pop Culture Icon of this Decade… that’s amazing.  He has good taste, nothing ever leaves his computer if it isn’t the truest expression of what he’s feeling.  This is how I work.  When I make my edits, such as the WRS edits, people either LOVE them, or HATE them, which is EXACTLY what I want to have happen.  No matter what, the response to my work will always have an absolute value of 10.  Rather it’s a positive or negative 10, I don’t care.  But I will evoke emotion.  I will be the new pop culture icon of the next decade (2010-2020) period.

What do you want to achieve with the video?

I want this to be the video that kids can show to everybody.  There will be no fillers.  No un-exciting, un-evoking moments.  My goal, that I will achieve, is for kids to show these videos in classrooms… for kids to show these videos to their soccer buddies, their co-workers, the meathead jocks at their school, the ghetto kids, the stuck up kids… everybody will be entertained and amazed at the level of skating, and the concept of this project.  I want people who stopped skating due to life, injury, love, whatever the reason, to watch this video and start skating again.  If they don’t do that, then I didn’t do my job.

You filmed most of the WRS events, how do you feel about these?

WRS is a great thing for skating.  When I got into it around 2001, ASA was still big and it put the pro’s on a pedestal.  It gave me goals to want to be am, and then go pro, etc.  This is what WRS and AIL are bringing bag, and its absolutely one of the key things that this culture needs.

As far as my Edits go, such as the “Amazing” one at Chaz Sands and the Barcelona throw back dedication to “Aggressive In-Line”… I mean this in the most humble way, but they were the best contest edits ever made in skating, and I did them in a matter of hours.  I am calling out all filmmakers/videographers in skating, STEP YOUR GAME UP.  We are the ones representing our culture to the world.  Skateboarding is a $4 Billion dollar a year industry, that’s our window of potential market share.  We will not achieve it by dropping windows-movie-maker edits.  That stuff is whack, my 11 year old sister is dropping movie-maker edits on youtube, that are fading some skating ones i see.  Come on people, learn to color correct.  Watch After Effects tutorials.  Be a PRO.

On a further note, whenever I’m making a new masterpiece… rather it’s a WRS edit, the FootworKINGz movie, or Game Theory, I am not looking at online edits, and skate videos as my competition.  That’s shooting way too below par… Whenever I do any piece of work, my competition is Steven Spielberg, it’s Hype Williams, it’s Kanye West, it’s Michael Gondry, etc.  Regardless of the multi-million dollar budget gab between their projects and mine, I see myself as on their level and therefore responsible for only hitting “export” on projects that can stand up next to theirs.

When will the dvd be released?