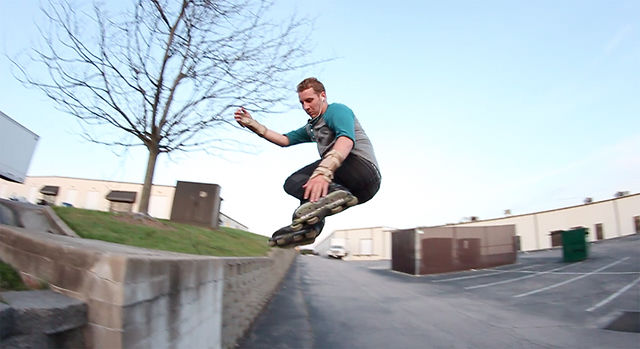 Best lines-spot you know: My favorite line spot will probably be Daniels Middle School in Raleigh. It has the blue bleacher rails for the first clip in my edit, but there is also tons of stuff around the entire school with endless possibilities. Really amazing spot to film at.

Worst encounter while drawing some lines: This really came at such a hard time for me to film for something, I worked on this for a really long time because I got stuck doing stupid shit with school and work, so it was just really hard to get the clips together. Not to mention the little bit of time I did have off from school or work to film for this, I had to find someone who can film lines.

Best moment in rolling… ever: I don’t think I could narrow it down to a single moment, but over the past few months I have been hitting tons of cities around the East Coast with my ‘I Don’t Carolina’ crew filming for our video. Those trips are some of the best I’ve ever been on and its been a blast stacking clips with a bunch of incredible dudes. Keep an eye out for the video when it drops!

If you had a time machine, when and where would you travel? I dont think I would want to travel to any particular time. I could answer something about going back and changing shit in my own life, or stopping some major historical event, but I think that everything happens for a reason. I am here and now because that’s what is meant to be, and I want to make the best of it.

What would you do for $10,000? First, I would buy a bad ass camera setup, then I would use the rest to put towards a new car. From being on the road so much mine is on its last legs, haha.

Weirdest thing you’ve ever seen: Hanging out with Briggs as much as I do. I am constantly seeing him try the most awesome weird shit on blades. Plus its always an adventure with him, and we always find some goofy shit to joke about.

Worst date you’ve ever been on: I can’t really think of a really bad one, I have been with my current girlfriend for almost four years now and things have been great. No looking back from here.

Top 3 places you want to visit next: Sacramento CA, Barcelona Spain, and New York City are three awesome places I still haven’t had the chance to go to.

What do you don’t like about yourself? I wish I was more well rounded, I go through phases where I work a shit ton or I’ve got to focus super hard on school and times where all I do is skate. I need to do a better job at finding a balance between all of these things and still have time for my lady friend! Im lucky she’s so supportive of what I do, but I certainly don’t want her to feel left out.

Your plans for the future: Just to keep skating as much as possible! Try to finish up the ‘I Don’t Carolina’ video sometime this year, and keep doin’ what I do! I wouldn’t able to do what I do if it weren’t for the guys at Rollerwarehouse, Razors, M1 Urethane and Bulletprufe clothing. Thanks to all of them for their support!