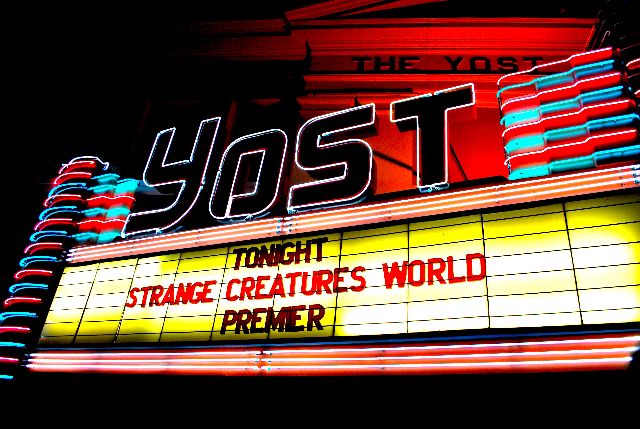 Friday, October 5th was indeed a highly anticipated night according to all those who were in attendance to the Strange Creatures “Voodoo Show” film premier, hosted at the historic Yost Theatre in Southern Orange County within the city of Santa Ana, California. Nearly 4 months after the films teaser went live on the internet, company owner of Strange Creatures – Amir Amadi, and his team of eccentric knuckleheads proudly announced that their latest film project would make its big day world premier the night before Jon Julio’s second annual Blading Cup event.

Strange Creatures has been active on the blade radar here in the United States since late 2009, early 2010. More recently They’ve been touring all throughout the north west of the United States filming in preparation for the “Voodoo Show” release, while spreading the gospel of modern day blade culture fused with a head spinning psychedelic rock twist. It is very apparent at this point in time Amir Amadi and his crew of “Creatures” are doing things right… “putting in work” …as us Americans would say. Fortunately, through the ties of skater Dean Coward and Valo Brand, Strange Creatures has managed to establish alliances with the one and only Brandon Smith, as well as the Immaculate Alex Broskow which has lead them to series of promising future opportunities. Just recently in late September, the team of unremorseful “Creatures” invaded New York for a seven-day east coast extravaganza of complete chaotic blade debauchery, shenanigans, as shown in the film.

Pro Skaters from all around California, and out of state, along with a pretty impressive turn out of people all gradually congregated with one another as they impatiently filled the seats of the theatre. It was about 9 pm pacific coast time, the house band: “Dahga Bloom” had just about wrapped up with delivering a short symphonically charged, mind warping, virtuosic psychedelic set, as their job of being the pre-show live entertainment finally reached its last tune, the film was then shortly presented after a few visual media complications passed. By this time the energy in the theatre escalated to a new level, the audience of rowdy blade junkies and supporters sat in their seats not knowing what to expect as the film went into full effect.

Within the first scene of the introductory part of the flick the audience raged in complete in disbelief as they witnessed Alex Broskow take an unforgettable neck breaking bail off what appeared to be an eight foot or so high ledge and simply just walk away surprisingly unharmed. At this point the audience members full undivided attention was uplifted by 100% when their eyes began to unraveled to the wrath of skaters: Dean Coward, Alex Broskow, Dylan Davis, Matt Luda, Adam Brierley, Brian Smith, Keith Brierley, and Matt Langel completely just destroying everything insight, taking the term “shred” to a whole new level. If you haven’t yet seen the film, it’s totally worth making it a goal to watch it in the near future. For more detailed information about “Strange Creatures” simply follow them on the following: Facebook, Tumblr, Vimeo, and of course strangecreaturesco.com.