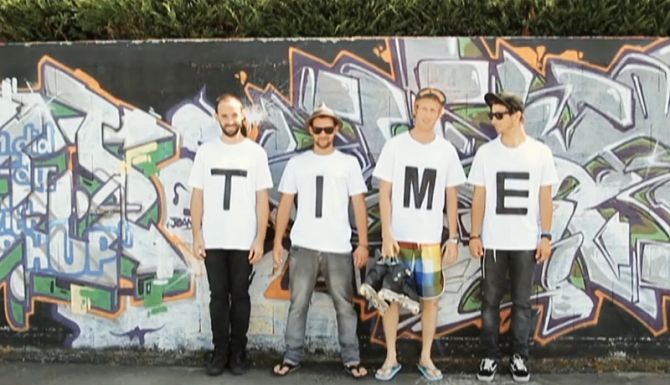 A crew video in the purest sense of the term, ‘TIME’ is brought to you by the infamous Taryf collective. Spread all over the South-West of the country, its members have organized a number of sessions and tours in order to gather footage of everyone, on numerous and mostly unseen skate spots in both France and Spain.

Things start off after a classic intro with a profile on newcomer Samuel Hontabat. Despite getting injured early in the process of filming for his section, Sam comes up with some good tricks which will leave you wanting to see more of him skating at his full capacity.

The first of the two main profiles features the like of Greg Breger, a fast and over-energetic Gambas whose deplorable clothing style & Walmart tee-shirts do not prevent from attacking all sorts of obstacles with various tricks performed at high speeds. In spite of an odd succession of steady shots slowing down the fast pace in the middle of the edit, only to pick up again, Greg comes through with a really good section in the end: solid.

Then comes the fast-rising star Guillaume Le Gentil in order to close things up in the best of ways. However, the kid is so consistent that when his profile starts playing, you’ve already seen so much of him in the various montages that you’re now accustomed to his hard hitting tricks. The many bangers he laces in his section are diluted in an abundance of tricks that play too fast for any of it to be truly highlighted. Guillaume is so good that he has too many enders to choose from, a luxury that unfortunately leads him to not making any real choice: being more selective would have left a bigger impression on the viewer, I believe, and probably left enough footage for a couple more bonus sections!

Do not let my negative tone fool you though, the overall quality and impressive skating showcased in this DVD far outweigh the few downsides I’ve listed above. Jim and the whole crew spent a lot of time and effort in order to bring you some fresh footage from France, all packed in a great DVD. Something a little different, that only such a tight & enthusiast group of people could produce.

As they’re all working on a new project already, you’ll probably end up watching ‘TIME’ over and over again, until their new production drops!