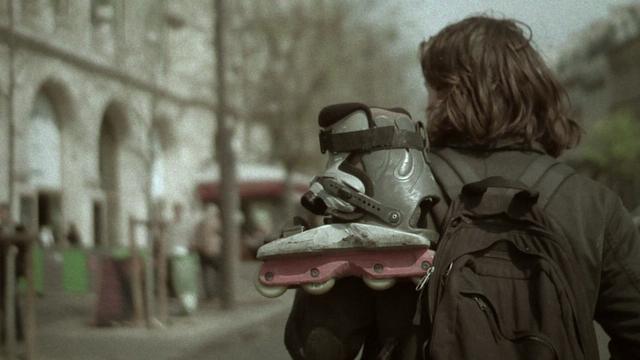 Summer 2008: Released a skate film entitled “FLYGT” along with Be-Mag print issue 29 – after working on this project for nearly two and a half years. Following this I got rid of all my camera equipment used for the film and took 8 months off from dealing with any skating related shoots or editing.

Spring 2009: I receive new tools, and begin testing the possibilities of 35mm lenses (most importantly), but also HD video.

Throughout the spring and summer several online edits where released, including the “Freedom of Feet” edit commencing Jacob Juul’s addition to the Remz pro team.

I began sketching out ideas for a new film, and come September the first clips are shot for this still untitled project.

Over the long, dark winter months of Denmark in ’09/’10, the shooting is forced to a near standstill. But a lot of this down time was used to find out which components to work with, and to perfect how this film should feel, look and sound like.

2010: By January the title “Traitement” is conceived and I announce the project with the first short teaser.

Spring marks a new beginning, and shooting continuos throughout an array of cities around the globe until my production deadline in September.

Meanwhile more teasers are released along with other snippets of the project.

Following up, the next four months is all about the postproduction, spending roughly 700 hours organizing, editing, color grading, titleing and sound mastering the footage of about a year worth of shooting.

Jan 2011: The film is finally completed or as a wise man once said, left be… I send in the master copy for duplication. February marks the first premieres and sales of Traitement.

“I mean the shapes it can take, and the places it brings you… everyone searches.”

»I appreciated to film with Jonas in Denmark and in Paris. I love discovering that we use our feelings for what we love to share and to show it. Getting to know Kåre and Jonas was really nice, we had a good time! I’m really happy to have participated in this project! This is the best retirement gift I could wish for. It was a great moment of pleasure to watch it. The film described our passion well worth, I really like the picture quality and the script, too! It is happiness for the eyes!«

»Filming for Traitement was an experience of both good and bad. Sometimes the level of frustration could get sky-high but when my tricks got put together it paid off and put a smile on my face.«

»Filming and spending time with Jonas Hansson was trumped only by the experience of watching the final product. The editing and filming style plus music selection made it very easy to take in the details, of what makes rollerblading such an amazing art form.«

»This film wasn’t really a lot of work for me, only two really funny weeks working on it in Berlin. Like if you can call visiting the same park everyday for a smoke with Dom and Jonas, haha. Then two days in Copenhagen with some tricks and then I got the bad news in December about my knee, so no more skating for me. So if you guys think I was missing out, that’s why. I’m starting slowly up again and you really get to feel how much you enjoy skating when you haven’t been doing it for so long. So hopefully this year you will see a lot more from me.«

»Definitely a movie with a lot of meaning. A portrait of rollerblading: friends, good memories and skating.«

»What do you get if you mix a fine selection of outstanding skaters, a guy with a big video camera in his hands and perfectionism on his mind, willing to put all his energy and money into one single project? Give those ingredients two years in some of the most exciting cities all over Europe and the US… well you will get a skate movie called Traitement!«

»When Jonas came up to me in early 2010 and told me about the project I was absolutely down with it. Being chosen by him along with guys like Dominik, Kåre, Jacob, Rob G, Marc and Mathieu, there was really no question that I’d not be down with it. Having not skated for a few months made it hard to session really though. But the easy workflow and the good times we had ended up in stressless sessions that were all about skating and him capturing it. When I saw how it turned out, I was really, really impressed.«

»Working with Jonas on this project was a hard task on many different levels. Jonas is a professional and he’s got a really clear and personal idea of what he would like the final picture to be like. How he portrays my skating and how I see it, might not be exactly alike. But I trusted him to do the right thing and the shots of me turned out great. Traitement is a really personal skate movie compared to a lot of other films, and I think that takes a whole lot of talent and courage. Like it or not – Traitement really is unique!«

You can get your copy of Traitement at your favorite blading retailer worldwide and at the Be-Mag online shop.