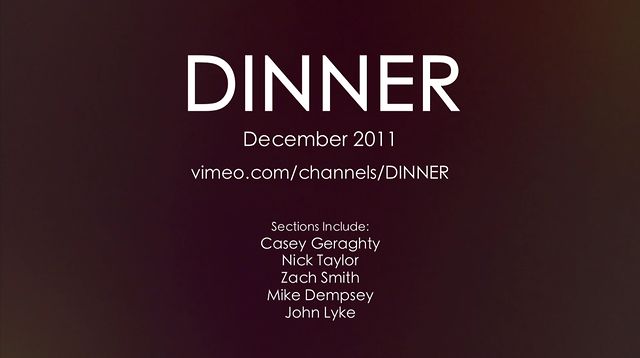 Between you, Mark, Mike, and John Lyke, you guys are a creative powerhouse. Not only do your videos have what one would call a “professional” quality, but they have a charm to it as well, something that can be lacking at times, or rather, get lost in skate videos because the focus is primarily on the skating. So, with that being said, whom or what do you guys find influence from?

Casey Geraghty: From a video standpoint, I’m influenced by a variety of different people and cultures. Most recently, I’ve been watching a lot of surfing videos. My favorite is the stuff from the 60s. I think my section in Dinner will reflect that. But I’m also heavily influenced by other blade videos. Ivan Narez does it right. I think most blade videos – including online deals – are looking pretty “professional.” I just watched ‘Vine Gang,’ and loved the look and feel of that video.

Mark Golembeski: I definitely find the most inspiration from my buds. We always have so much fun no matter what or where we’re skating. We could skate a dinky curb all day and have the best session. In terms of camera work, we all work in the film/video field so we are constantly thriving off of each other’s success and push one another to be more and more professional. That keeps me on my toes 24/7.

Mike Dempsey: I find lots and lots of inspiration from my friends, which is a massive DOYYY. Other inspiration comes from food, ninjas, music, and people pushing their form of art. I like to watch lots of videos in all different shapes and sizes and nitpick my favorite parts. People out there who are doing their own thing in a way that I would have never imagined are what I look for.

Nice. So the next thing I want to touch on would be what you mentioned before about you guys each being in a different state filming for the video. How has that been? Obviously being scattered like that, I would assume, would make filming a bit harder as you can’t just go out as a group and get clips. Rather, it relies on each of you to get their own section filmed and all. Would you say that adds an element of surprise to the whole thing?

Casey Geraghty: Right now, the rest of the gang is altogether in LA filming Mike and John’s parts. But, for the majority of filming, I was in Connecticut, Mike was in LA, and John was in Vermont. So, you’re right. I basically had to just go out and get it done myself. I enlisted the help of my girlfriend, Lauren, my family, and whoever was down to shred on a given day. If I got a clip I would text “+1” to everyone involved in the video. It felt like a scavenger hunt. Then I would go home, add the clip to my section, and send an update. Updates have been the name of the game with Dinner.

Mike Dempsey: Element of surprise, most definitely. It was extremely motivating to get new updated footage from the guys on the east coast. Nothing could pump me up more than receiving brand spanking new footage from my hometown heroes. Casey and John were killing it on the east coast while I was deep in work here in LA. Getting “+1” texts a couple days a week was the coolest thing ever. Even though I wasn’t at the sessions in CT and VT I felt their sections being pieced together. Mark Golembeski has been a huge part in everybody’s sections, traveling three thousand miles to help me out with mine while still working hard on the east coast. A real commutative effort was created to make this video possible. Each member of our crew is greatly capable of skating, filming, and editing their own section. As a group, the possibilities are endless.

John Lyke:  At first the motivation was missing. Skating everyday by yourself in VT isn’t an ideal progression setting. I blade with skateboarder amigos, but we all know that isn’t the same. It didn’t matter though. It was time to film Dinner. Casey sent an update – quick edit of his tricks so far – and that’s where the real motivation came from. Finishing another section was too far ahead, but a quick update for my crew at the end of the day was immediate satisfaction. I enlisted my girlfriend Marie and friend Phil as camera operators in Dinner. Even though we were filming all over the US the updates made it feel like we were still sessioning together. Getting a “+2” text from Casey was a little shot of adrenaline. I knew that night I was going to peep two exclusive clips for our trilogy. Dinner represents a close group of friends that have been having fun blading for well over a decade. Once I hit CT and LA the crew actually met up and some of the best times of my life occurred. We had a light lunch so that we could save ourselves for Dinner.

Mark Golembeski: Having everyone apart from one another is definitely the worst, but we’ve definitely found a way to keep ourselves motivated and connected. Casey stepped up and got the whole “+1” texting routine going, which definitely fueled the fire under John and Mike’s butts. Seeing that +1 text built up that anticipation of what the trick will look like. It’s the best spark we could think of and is such a huge part of what the creation of Dinner has been. Keep your eyes peeled to our Vimeo channel to see tons of goofy “unofficial” trailers, updates, and Dinner when it releases in December.

Great, so do you think you’ll continue making videos in a trilogy format? Was that the original intention when you did Breakfast, for it to be a trilogy? Or, did it just evolve into that?

Casey Geraghty: We weren’t planning on making a trilogy when we made Breakfast. Or, at least I wasn’t. When Mike Dempsey pitched me the idea of “Breakfast” as a title to our online video two years ago I laughed for an extended period of time. It was too funny not to be the title. And the best part about that title is that it lends itself to an obvious trilogy. Although I did want to name this third video “Breakfast 3,” just to be a dick.

John Lyke: When Breakfast came out, we knew if we made another video it would be Lunch.

Mark Golembeski: I didn’t know our video would be a trilogy at all since I suggested our first video to be called “Cock n’ Pooper.” I still think it’s a great name, but Breakfast, Lunch, and Dinner are a little more professional. It left so much more room for creativity. I don’t think we’ll do another trilogy, but we’ll definitely keep the fire burning as long as we can and keep pushing ourselves to create awesome videos.

Mike Dempsey: This trilogy has become a tasty surprise. It wasn’t a plan to make all three videos but it just kind of fell into place. Like Mark said about keeping the fire going… who knows if there will be another trilogy? But, there will for sure be more fire burning and shit.

Seeing as how successful the online releases have been, do you think you guys would ever put out a DVD of the whole trilogy? Or, was the original purpose of this to be online release only?

Mike Dempsey: A DVD will be made of the trilogy series as well as continue to be available online. We don’t think the DVD will be distributed at the moment, but it is open to discussion. The DVD copies will be given out to anybody we blade or hang out with, and hopefully for free as well – depending on the cost of the DVD’s. Having a hard copy of three years worth of work is just dang fun, I tell ya.

After three years of work, having at least a physical form of your work is reassuring. I mean, god forbid we ever face some sort of internet-terrorism and all of our online shit gets deleted. Anyhow, I know that in Lunch you guys had some clips of Jon Jon and a few other people that weren’t originally in Breakfast. Do you guys have any surprises for us in terms of cameos or is it just going to be the original crew?

Casey Geraghty: It will be the original crew, with sections from myself, Mike, John, Nick Taylor and Zach Smith, and maybe a few extras.

For sure. Thanks a lot dudes. Any last comments?

Casey Geraghty: Lastly, I’d like to thank Lauren, my girlfriend for filming me skate, and looking out for spots for me. Thanks for reading. Thanks to you, Ryan for promoting our video. Be sure to watch Dinner!

Mike Dempsey: Huge thanks to Mark and John for coming to LA and filming for 16 days in a row and a bunch of other thanks to the rest of the crew killing it on the east coast. Also thanks to blade companies that show us support: Print Brigade, Create Originals, Xsjado, Be-Mag and ONE. Can’t wait for our next project! Suck up on my butt until then!

Mark Golembeski: Stay hungry my friends. Get your plates ready.

John Lyke: Thank you to Be-Mag for sure, as well as our 30 true dinner fans. Made in America with pride.