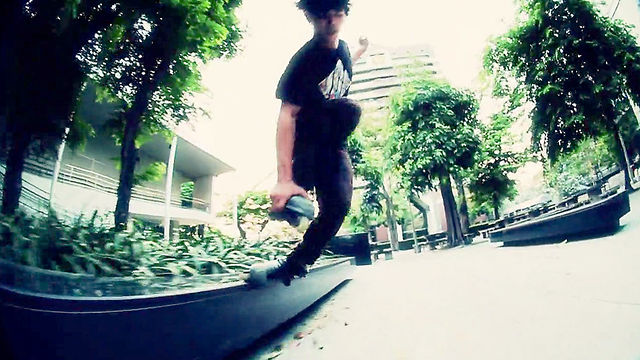 Hometown: I was born and raised in Paknam, Samut Prakan, Thailand just 50 mins from Bangkok.

Best lines-spot you know: There’s a spot under the Rama 8 bridge which runs over the Chao Phraya river in Bangkok. It’s probably the best around. Skaters like it mainly because there are many ledges, but honestly the atmosphere is just really chill for skating.

Worst while drawing some lines: Probably falling on my balls and then almost getting run over by a family of three on a motorbike!

Best moment in rolling… ever: Let just say, there’s more than one.

If you had a time machine, when and where would you travel? I would go to the future. People are too caught up in the past, plus it would be nice to see how people skate in 2112.

Favorite kitchen utensil and why: Coffee maker… Because I love good coffee.

What would you do for $10,000? Top soul off the side with a parachute off the 29th floor of my building.

Weirdest thing you’ve ever seen: When I was 11, my brother got a traditional Thai tattoo which is given by monks. Many people become possessed by the spirit of the tattoo and I watched my brother turn into a pretty fierce tiger.

Worst date you’ve ever been on: It was at the end, when she expected me to pay everything.

Top 3 places you want to visit next: Tokyo in Japan,  Montreal in Canada, Cairo in Egypt

Your plans for the future: Filming for the BHC video, making an edit for USD, making a TV show called ‘Irollerblade’, having fun with my homies and hopefully to visit more countries in Europe.