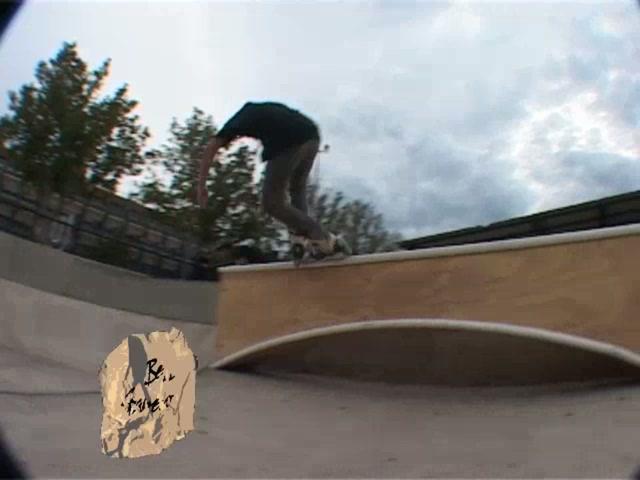 Australian rolling has received a lot of exposure internationally recently and its latest event has provided further justification to the hype surrounding many of the local skaters. The 2010 Australian Rolling Open in Adelaide was set to be huge. With major sponsors Bayside Blades, Da Klinic, Razors and Havok all putting in enough cash to offer a Flight to a North American WRS event, a lot was at stake for Australia’s rollerblading elite.

For those of you not familiar with Adelaide City Park it is a giant mecca of concrete brilliantly located at the edge of the city’s CBD. Not since 2004 when the Australian Inline Titles had been hosted here had the park held such a major competition,  in that final the likes of Blake Dennis, Josh Clarke and Hayden Watt had battled it out for the Top 3 places. Which raised the question, would we see a final so good again?

The heats kicked off, with around 50 competitors, under a brilliantly sunny Australian day at 1pm. First up were the Under 18’s, the level of these riders is so high that many of them would have ranked in the Open division. Razors rider Tom Coley-Sowry made the decision to focus his energy purely on the U18 event, his gamble paying off as he took first from 2nd Robert Kellet and 3rd place Paulie Haack. His silky smooth style and combination of truespin, alley-oop and 360 tricks on nearly every obstacle was just enough to ensure the win ahead of a hugely competitive field. U18 participants were almost three fold that of last year’s event giving event organisers hope that there’s an increasing depth of talent in the Australian scene.

After a short intermission where local rollers Cameron, Seb and DY moved in a wall-ride box that they had custom built for the event, the Open competition kicked off. With elite riders from all corners of Australia, the judges must have had a very hard time separating the good from the great… but they managed. The heats were in the ‘gravity games’ format and judges looked at Consistency, Creativity, Style and Difficulty. Each skater was given a score out of 10 in each category, a total of 40 points, and with four judges, that gave them a total score out of 160… which meant a lot of scores to tally up for the officials.

Just as the sun dropped and dusk kicked in we had our results in and our top 10 finalists ready. Each of them kicked off with two 45 second runs, followed by a 15 minute jam session. Unlike a lot of competitions equal weighting was placed on the skaters best run and the jam so it was important to get at least one solid run in and everyone managed that so it was still a pretty tight field right up until the jam.

After the riders’ runs there was no doubt that we had a real competition on between recently returned from injury (Knee Reco Late ’08) Gav Drumm and Melbourne local-New Zealand born legend Danny Jensen. Brock Midgley, Hayden Watt and Johnny Jensen, all seasoned competitors, were also in the mix and everyone was aware of how capable they were to upset the competition at any stage.

As soon as the jam kicked off we had hammers being dropped left, right, and centre. A local contingency of spectators from the general public, 100 to 200 strong, had no idea what they were in for. I was standing amongst them and I don’t know if I could tell you who was more excited, the little kids or their parents! If someone went upside down there were big cheers, if someone did a technical grind there were big cheers… but how they erupted when they saw Johnny, Gav and Tim Bradley stall the fence 8ft above a quarter right in front of their very faces!

Although we’d seen a bit from Danny Jensen in the heat he went relatively unnoticed. Just as I started to think, has he pulled out? Is his bad knee playing up? Everyone turned their attention to the East end of the skate park where he was patiently waiting atop a bank. As the course cleared and even competitors stood back to see what he’d do, tension mounted, dropping in and seemingly aiming for nothing of significance, a random quarter pipe, until you saw his landing, a disaster Kind Grind on to the rail. How he got straight up from his first fall is anyone’s guess. Rest assured he came back charging it again shortly after, this time accounting for the wind conditions for the 3 metre disaster gap and lacing it! The crowd of skaters, the competitors and the general public erupted in excitement and amazement, because that was a brilliant end to what had already been an awesome competition.

Thanks again to all the sponsors, Bayside Blades, Da Klinic, Havok, Razors, Jug, Ground Control and Be-Mag for cash and prizes. Danny Jensen won a flight to a North American WRS event of his choice, so watch out if you end up at the same competition as him!

We look forward to seeing everyone in April in Queensland, Australia next year for the 2011 Australian Rolling Open!

IMAGES
– Tim Bradley, Stylish fishbrain stall on the 8ft high fence; Dale Travers
– Danny Jensen, 360 over the massive launch box that only him and Gav Drumm actually cleared; Dale Travers
–  Hayden Watt still has it, half cab Savannah in the finals; Jarred Pope
– Simon Dorabialski, AO Top Acid on one of the sub boxes made by Adelaide Locals; Jarred Pope
– The under 18 champion, Tom Coley-Sowry with a Disaster BS Savannah; Jarred Pope