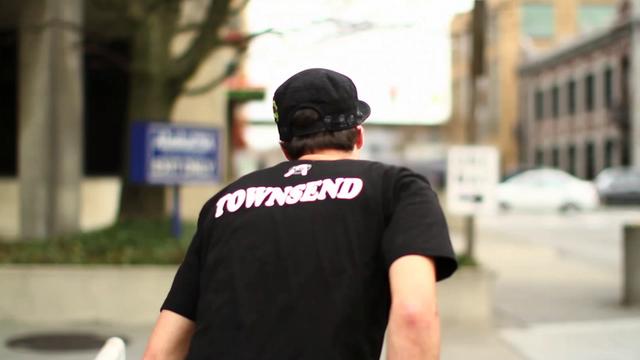 A Sunday with Jeremy Townsend

Edit and article by Anthony Rowe

We encountered the first spot, which had two obstacles close enough to create a line and another bank to stall about 40 feet away. We were their for about an hour getting some tricks before getting antsy and wanting to see what else we could utilize as a skate spot.

Rolling further into downtown we encountered a sculpture (statue) piece. Looking at it closely, it seemed as if bikers had already done some damage. We both looked at it for a few minutes debating what tricks could be performed on it. I turned around to get the camera setup and Jeremy had done the trick he was visualizing first try. Because of how cold and windy it was, I prepared to get the shots real quick. It worked out perfectly considering the security was walking out as soon as we left.

We rolled down the block to a brand new office building, which had fresh ledges and rails. Spending a couple minutes waxing the untouched ledges it was time to reveal how many tricks could be done before a security guard got in Jeremy’s face. Lacing some solid tricks, we both looked at the main entrance seeing this odd looking guy in a uniform and a badge walking towards us. Jeremy put up one more attempt in getting the soul, fakie to ledge, 360 out. Unfortunately he wasn’t able to lace it.

Jeremy goes back for another attempt and by this time the security was directly in his way. Asking kindly if he would move for one last attempt, he said, “No I’m not, I’m calling the cops”. Jeremy decided that was a rude response and went full speed towards the ledge. Security moved last second before getting knocked down. Jeremy missed the ledge because of the distraction. This lead to one final attempt, as security was standing in the way again, he went full speed towards the ledge. Thinking security was going to move again, it didn’t happen. The little badge boy got rammed about 15 feet. You would think security guards now days would have more common sense. Overall, it was a Sunday well spent.

Make sure to check out Barn Barner happening this Saturday near Seattle. The Northwests largest gathering of Rollerbladers!