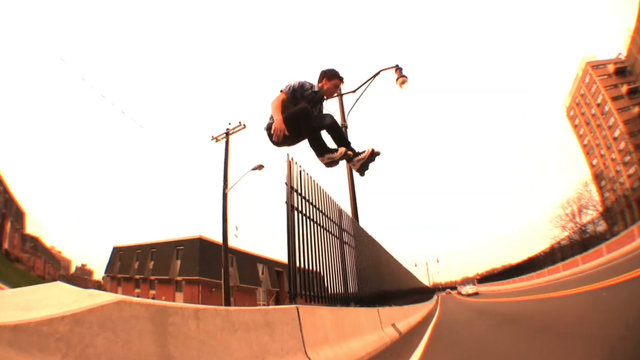 YOU’VE BEEN GETTING NOTICED WITH YOUR PHOTOGRAPHY; HOW DID YOU DECIDE TO GET INTO PHOTOGRAPHY?

I went in a big circle. I started out with a little digital point and shoot. Then I got my first DSLR and some flashes. Started editing the hell out of my photos, making panoramas and HDRs, and all that nonsense. Then I got my first medium format film camera, which was probably the most hyped I’ve ever been on photography. Then went through some more film cameras. And now my digital setup lies inside a bag with a layer of dust on it. I haven’t shot a digital photo in 8 months. I use a point & shoot 35mm, which was actually used for 90% of the photos in the Killin’ It photo book.

HOW DID YOU CHOOSE YOUR CAST FOR THE DVD?

The cast kind of just came along as I filmed, it wasn’t planned or anything. Pretty much anyone who stacked enough clips got a section.

WHAT WERE YOUR FAVORITE MOMENTS WHILE SHOOTING THE DVD?

I’d have to say that going to Arizona over winter break was one of the best times of my life. Phoenix is the best place to shred, in my opinion. The kids learn so fast because of the huge blade scene there. There were these two kids I met, Xathan Stewart and Alec Gentile, that have been blading for only 2 years and kill it like they have been skating for 6 years.

WHAT INSPIRES YOU IN MAKING DVD’S?

If you enjoy watching skateboarding, I suggest you watch “Mind Field”. Greg Hunt did an incredible job of incorporating super 8 footage with interesting artsy shots of random things into a badass skate video. He also made a photo book to try to give a better understanding to the public of how much time and effort was put into the making of Mind Field. That’s where I got the idea for a photo book.

The dude shoots babes with a point & shoot. Then bangs ’em. Boom.

YOU RELEASED THIS DVD ALONG WITH A PHOTO BOOK; HOW DID THAT GO?

I shot over 20 rolls of film and scanned over 300 negatives. The photo book was definitely the selling point. Even though I spent a lot of money to make the book happen, it was definitely worth it.

YOU PRESENTED YOUR DVD AT BCSD; HOW WAS THE FEEDBACK?

Sold like 50 of them; people were hyped I guess! (Buy it here: killin.bigcartel.com)

ARE YOU PLANNING ON RELEASING ANOTHER DVD?

Not for a while, man. The video industry isn’t the same as it used to be as we all know. I’ve just always wanted to make a video for shits, but hopefully Killin’ It won’t my first and last.

WHAT ELSE DO YOU HAVE PLANNED SKATING-WISE FOR THE YEAR?

I’m graduating high school this year and trying to make this summer as rad as possible. I’ve been pretty hyped on blading lately and will definitely continue to document my and other peoples lives.