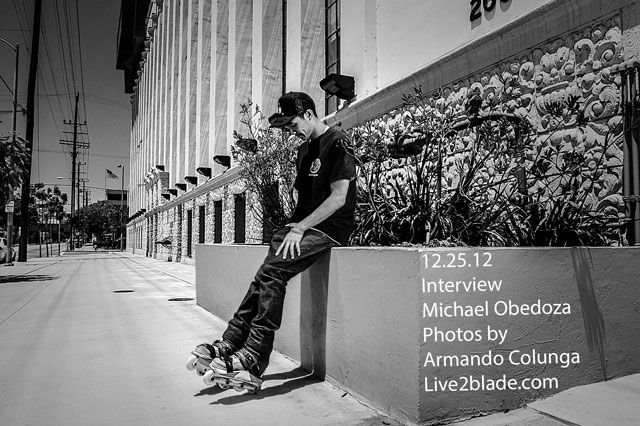 North on the 110 freeway past Compton into South Central, Carson baby, Jordan Williams and I picked up several stands, lights, flashes, bags filled with various lenses, sensors, reflectors, cords, batteries, a heavy sandbag, and, most importantly, Live 2 Blade photographer, Armando Colunga. Everything was reloaded into Jeremy Soderburg’s car, a comfortable fit for the equipment and the four bladers in attendance. Looking to finish up a photo interview that Armando and I have been working on, we headed west on Artesia

We made our first stop in the beach city of Redondo, at a blue down rail that was a stairway to a set of condominiums. Instead of grass, the hill was lined with ice-plants, that are squishy when stepped on, and can be the equivalent to wax on wheels – making the landing or run-up slippery like blading on ice.

The flashes went up, Armando did some tests, clicking buttons here and there, moving cords, lights followed with a soft bang – the equipment worked. Jeremy found a place to film ensuring he wasn’t in the shot. Before getting the thumbs up, I tested out the rail with a few royales and soul grinds.

Today was the day I was going to do a trick I knew I could do on a smaller stair set but, I was stepping it up today. I was about to get in on what Chris Farmer likes to call, the “battle”. The fight all bladers go through with an obstacle, trying to conquer the fear, pushing through injuries, and finding the courage to do what needs to be done to accomplish the trick.

After what felt like a thousand attempts, a lot of damage of landing in the ice-plants from all of the misfires, I was ready to take my blades off and throw them into the street, hoping someone would run them over.

I took a breather. Let the inner bitch know that he was going to sit down. Made some adjustments and handled it the best way I knew how.

We checked the photo and my hands were positioned like the server. Add a tray with a few plates of food I could have been the best food server to grind rails on blades.

I ran up the stairs, and with everything I had, got one more negative mistrial in. The photo was good, but, I thought I would give it one more heave. Armando and I were being stubborn perfectionists

At the top of the hill, I waited for a man, blonde hair, blue eyes, to pass. He walked up the stairs and began to greet me.

“Alright whatever you’re doing is going to stop here” he said. “Ahh can I get one more try, this is how I pay the bills.” Lying straight through my teeth, hoping to get a sympathetic hardworking American freebie.

“Alright, alright.” Wishing everyone could be a little bit more Liberal, looking to lighten the moment, fist in the air I said “Go Obama”

I began to pack up Armando’s flash to save him the trouble of walking up the hill. “Who’s going to pay for the damage to my plants here?” He signed his death wish.

“People are still going to buy property here regardless of these plants. The damage here is sooo minor.”

He blocked my exit, got in my face, and I looked down on him. “You have no idea who the fuck I am.” He cursed at me!

“I don’t give a fuck who you are. Now get the fuck out of my way so we can leave.

Like grinding that rail I wasn’t going to back down. My temper was getting the best of me.

Armando got in between us trying to stop whatever was not going to happen. “We’re leaving… We’re leaving.” Armando easing the situation with a calm tone in his voice.

“Don’t act tough dude. I will throw you in jail so fast. Have you ever been to jail?” He looked Mando dead in the eye.

“Yes!” I interrupted. “So shut the fuck up.” Using Mando’s tats and mean look to his advantage.

He giggled nervously. “I ain’t afraid of you.”

“We’re trying to get the fuck out of here.”Armando began putting his stuff away.

“How would you like it if I came to your property…”

Hands up, ready for anything, I looked at him and interrupted.

“Come over! Come to my house! Try that shit!”

He finished, “even considering that you own anything, and shitted in your living room.”

“I do own property (does my rollerblades count?) and me shitting in your living room is not equal to squashing a few plants.”

“What if you got hurt? Who would be to blame? I could get sued for this.”

“If I broke my ankle playing basketball, I’m not going to go sue the person who owns the basketball court.” I was asking to get a foot put in my mouth.

“That has nothing to do with it.” he replied.

“You’re talking down to us, like we have nothing to pay for, when we get paid (in blades) to do this. You could have just told us to leave, we’re adults, instead you’re being a big douche bag right now.”

Jeremy got him to calm down. He finally shut up, we packed the remaining light equipment.

I walked back and said “Hey I’m going to show you what the bigger man looks like.”

I used my foot like a broom and began scraping the floor sweeping the sidewalk of any visible remains of the Ice-plants.

“Even though you were being a big asshole I’m fixing what I can with these plants. I want you to know that if you show respect you’ll get it in return.”

“Thank You.” he finally calmed his voice down.

Armando and I talk about making a blading taco truck, here’s a recipe to one of my taco ideas.

Salt and Pepper To Taste