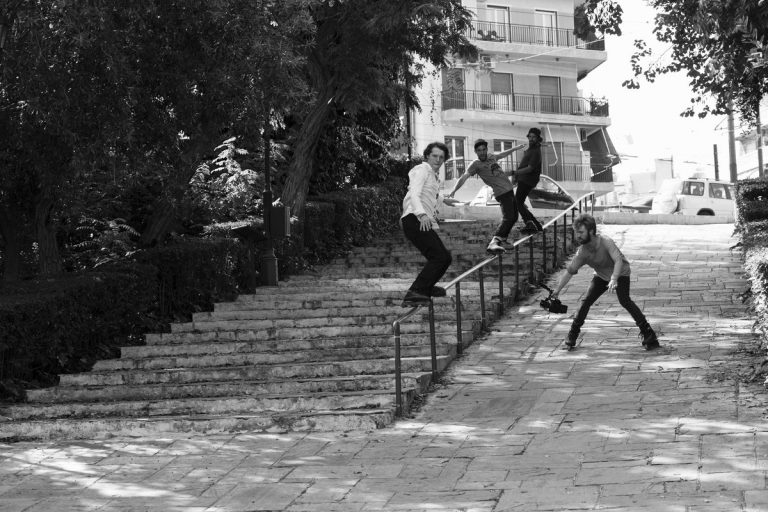 After watching it multiple times, I can now say with certainty: Delfon Dio is the blading film of the decade, in almost the same way Leading the Blind was the film of the last decade. Seeing it premiere on Winterclash, in a theatre filled to the brim with loud rollerbladers was exciting and I thought it may have lead me to thinking it was better that it is, but the value of the film was confirmed when I saw it multiple times in my home, by myself. Delfon Dio captures what I believe is the essence of rollerblading. It’s a celebration of rollerblading as a skill, as comradery, of exploration, of freedom, new experiences and the search for eternal youthfulness through it all. In short, rollerblading as a celebration of life.

This is an interview with the people who managed to capture it, filmmakers Karsten Boysen (K) and Benjamin Büttner (B). 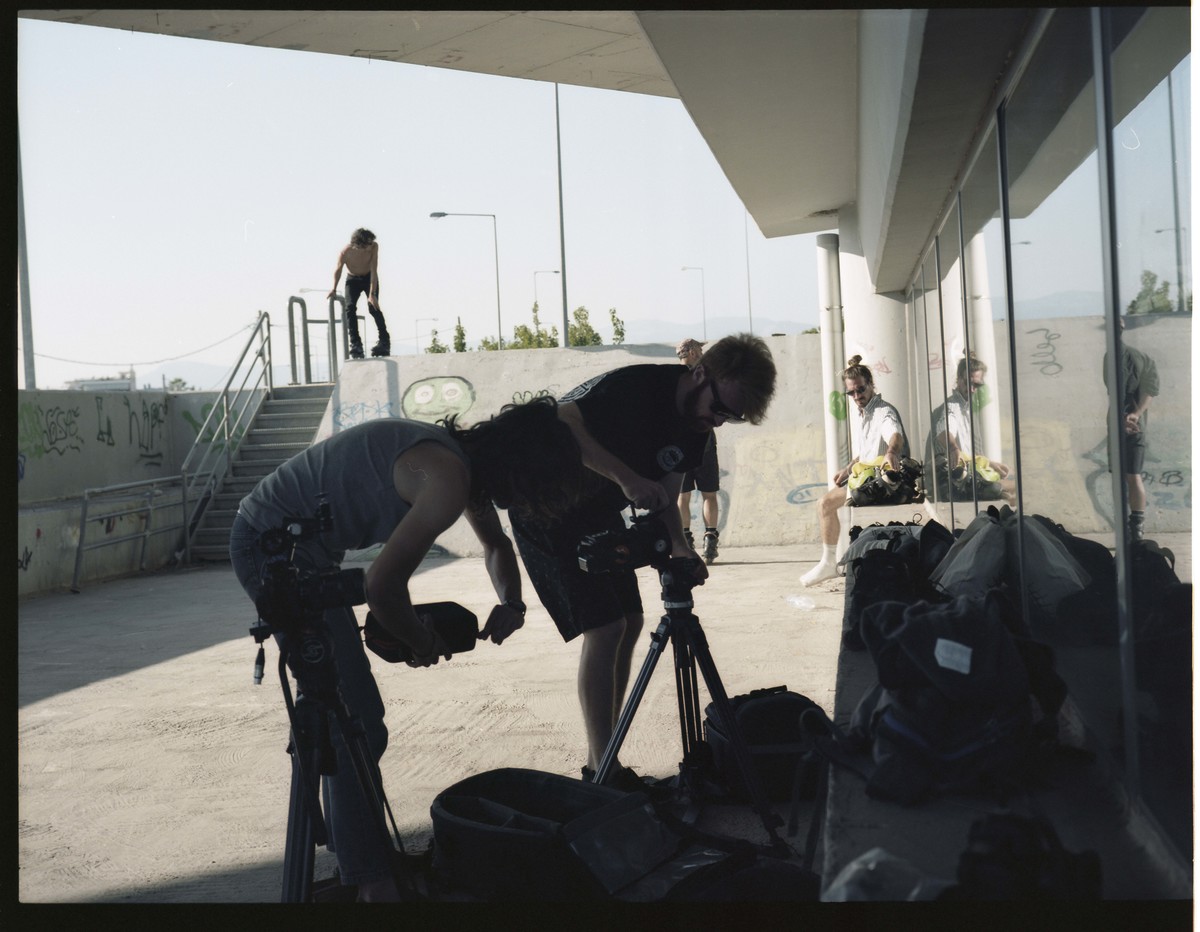 How do you feel about the initial feedback you got from people who saw the film?

K: That was quite overwhelming. It was amazing being able to premiere this video at this special event, where only very dedicated bladers come to. The crowd was louder than at any other premiere I’ve been to… There were a lot of people we look up to in the crowd and none of the skaters involved had seen it before, so it was very relieving to see they actually liked it.

B: It was a blast! I remember Karsten being so nervous he couldn’t even stand still during the premiere in Eindhoven. Watching the video on the big screen with hundreds of people that you’ve spent so many weeks working on was definitely intense, but with every minute the video passed I did feel the pressure disappearing more and more. Looking into all the happy faces afterwards paid off so much and is never gonna be forgotten.

When you were there filming it, were you really aware of what you had on your hands?

K: Well, you never know what’s going to happen beforehand, but we did know that we have a crew of the best bladers willing to put in work in front of our cameras and we were gonna go to a country, that hasn`t been exposed to the skating world so much. I was definitely skeptical if we were gonna find good spots, but the ground was better than expected for the most part and Athens is a seamlessly endless city.

B: I think it hit me once we landed on Andros-Island with its Snakerun and the BluEnigma Hotel. We saw some footage before but actually being there was a whole different experience. So you’re basically standing on top of that mountain looking down at this concreted BMX-Dirt-Track and you’ve got some of the best bladers with you and you’re like: “Yeah, this is gonna be a once-in-a-lifetime-experience.” 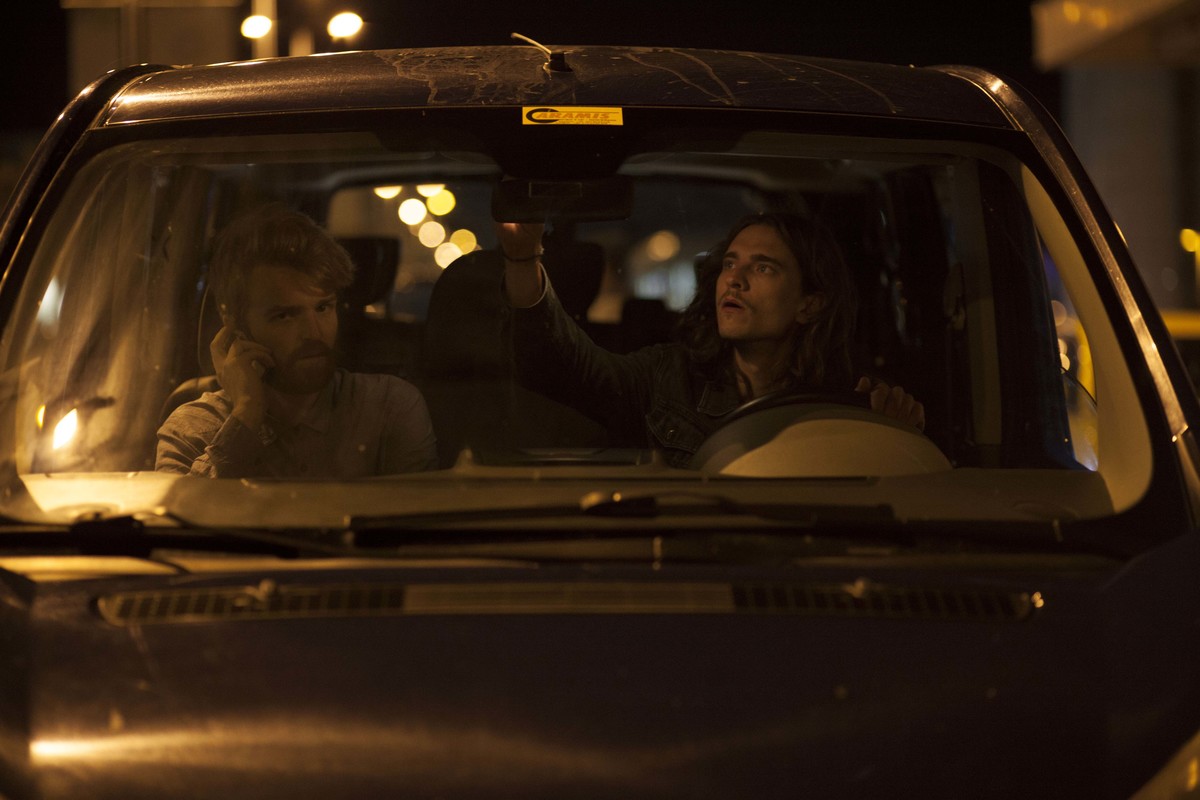 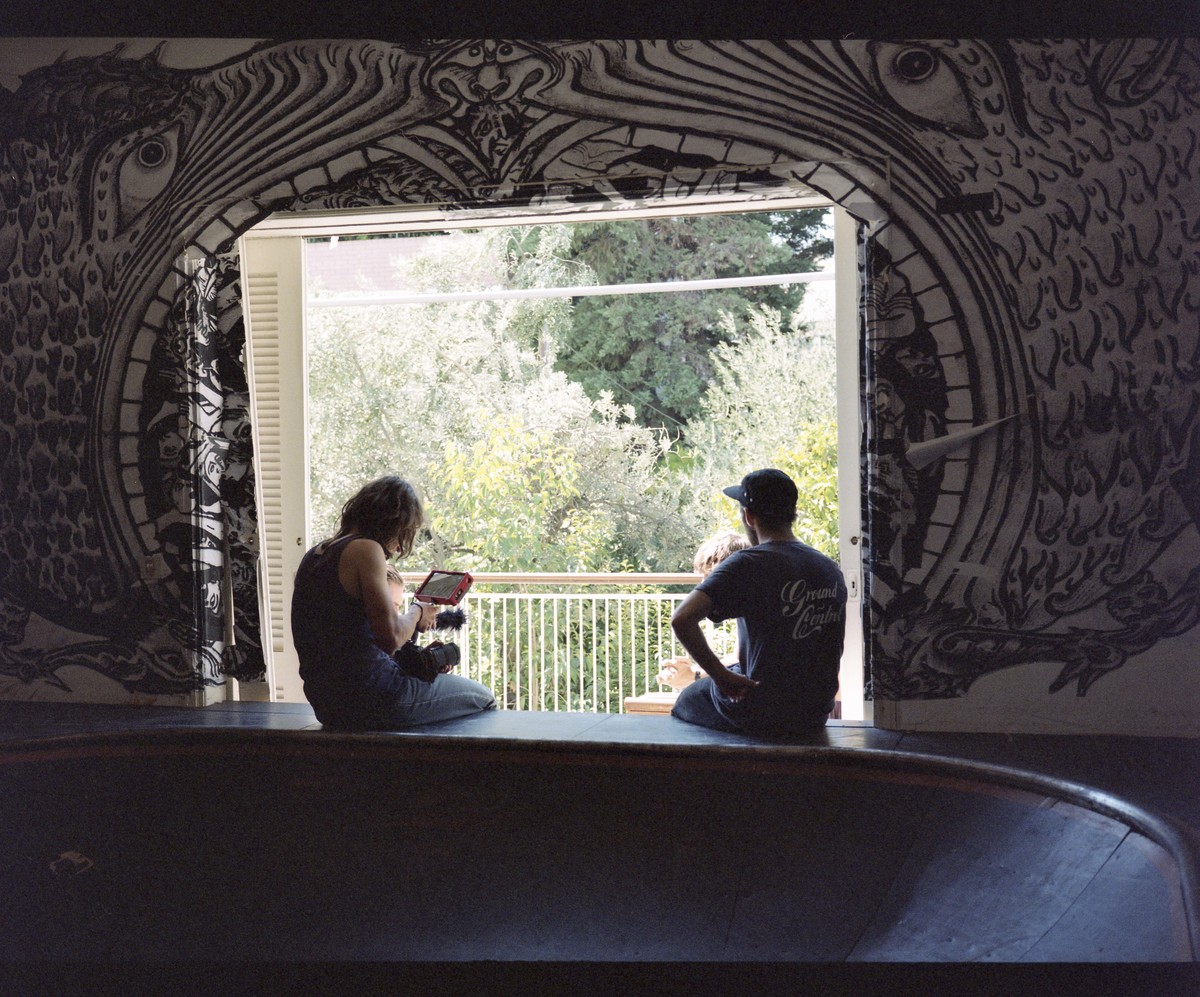 Freddy told me how you guys all lived together during the making of the movie and how there was not one single fight between you guys. How did you manage to create such great chemistry?

K: I think that`s quite normal honestly. The fact that Nick Kouros` house is so big also helped, so you could be by yourself at times if you wanted. That doesn’t happen much though, I think everybody in the crew likes to hang out in groups and joke around.

B: The first tour proved pretty much that all of us get along really well. Even though it was a bit frustrating sometimes to keep the boys together the overall atmosphere was very chill. In fact the boys looked out for each other all the time, got super excited on tricks everyone would do and also had a really beautiful time off skates. Can’t think of a better crew to be honest. 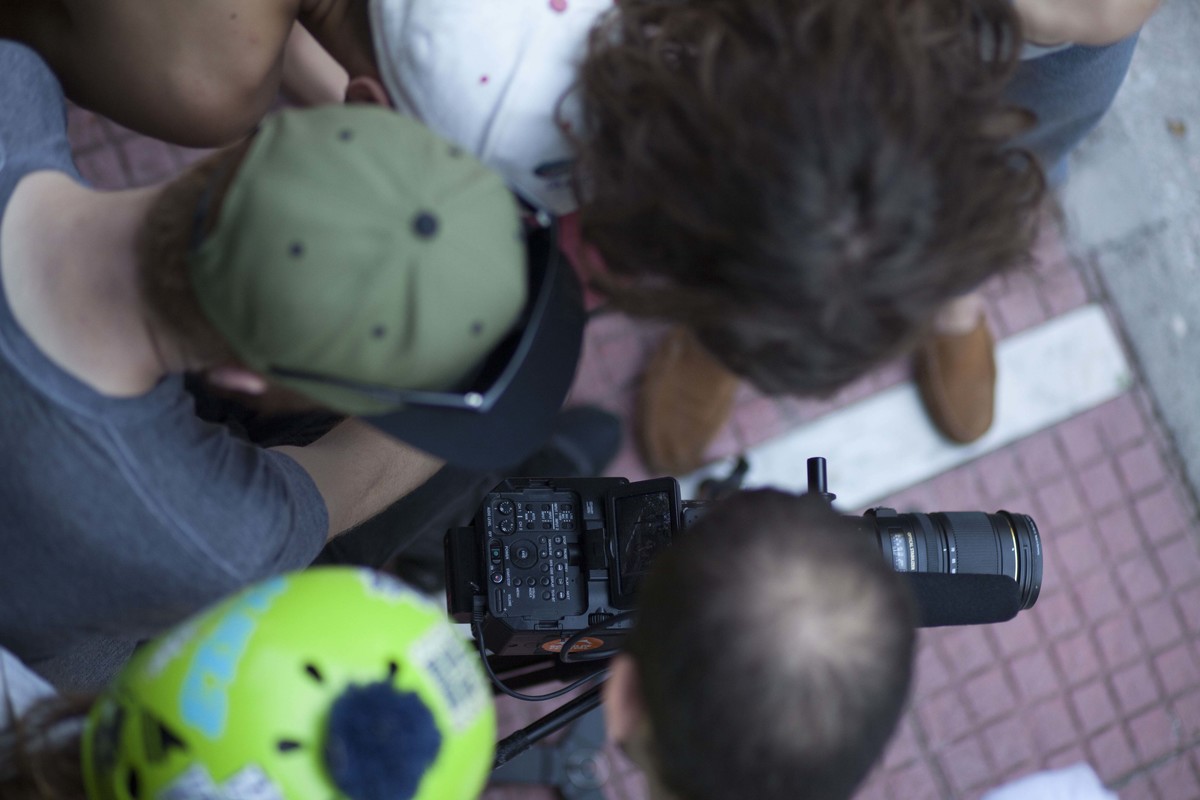 Onto the visual aspects of the film… Delfon Dio has that warm feel, all the colours are warm, the editing is… soft, for lack of better word and the filming is some of the best I have ever seen, especially the filming of the lines, that might just be some of the best ever in rollerblading, when you also consider the breakneck speed of the tricks. Why did you film and edit it in such a way? Did you have a vision of how it would look like beforehand, or did it happen organically? Also, why did you decide on the no profiles format?

K: Well, thank you! Sure the colors are warm, given it`s a warm country and all the houses are bright colored. It definitely has its own aesthetic and we were gonna try to show that in our shots.
Filming lines is always fun, though it can be kind of a pressure.You have to film every try like it could be the last, doesn`t matter if it’s the first or the 25th try. Obviously it gets a bit easier after a few tries, but the timing of skater and filmer still varies everytime. David and Chris Smith filmed a few lines aswell, they`re the best at it.
We set out to film everything pretty clean, most of the shots are from this annoying to carry tool called tripod. Except for the fisheye of course. Benny and me filmed everything simultaneously, so once we know what the skater will do we discuss how we are gonna shoot it, so it will look interesting in the edit.
We didn’t want to do profiles, because like this it allows us to be more creative in the editing process. With profiles it`s very restricted, since you know the formula how it will go from the get go. Also on a three week tour you can`t get really solid 30-40 trick profiles from 9 different skaters.

B: There’s no real way of storyboarding a tourvideo. I think that’s also the fun doing it. You never know what you’re gonna get. Doing a profile format would deny the entire idea behind this project since it’s not only about showcasing the world what rollerblading looks like but more about how these individuals inspire each other while being on the road. 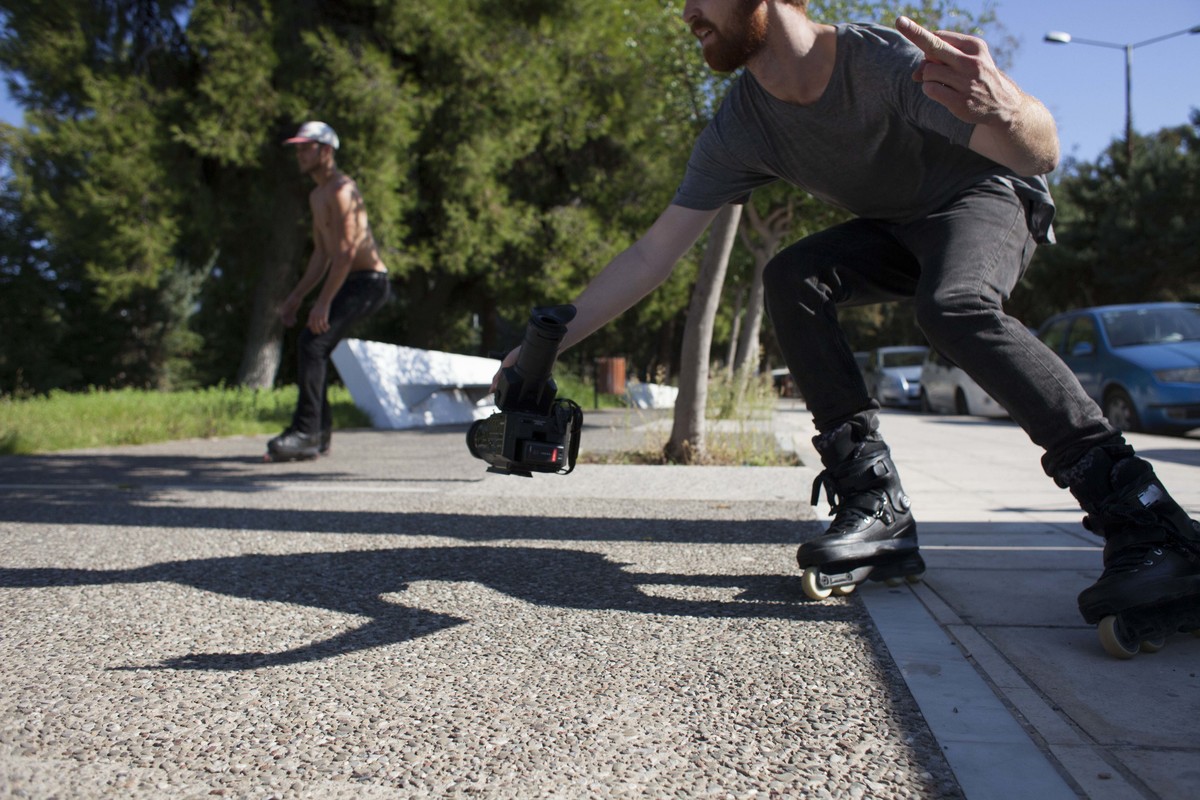 Did you guys differ in what you wanted to achieve in the making of Delfon Dio? When two people work on a project, how do you handle the process to avoid conflict?

K: Sometimes we have to argue over stuff, for sure. I`m more of a blade nerd than Benny, he`s more of an artist than me, but we usually end up to agree on stuff pretty quickly. Well, other than music selection, that takes a while sometimes to get it right.

B: I think our vision was pretty similar from the very beginning. Working together with Karsten on so many projects in the past absolutely helped during the development. Both of us know the each other’s mentality. And of course, sometimes it’s about making compromises but I guess that means it’s also about getting the most enjoyable outcome.

Karsten, how did working on snowboarding videos help you as a rollerblading film maker?

K: Maybe just being used to have very long days of shooting.
In snowboarding you have to wake up early every day and work a lot harder to get a shot, because of the whole preparation of a spot. Since that falls away it´s also harder to start early and get everyone going.

In terms of budget, I can imagine it’s also slightly different than snowboarding. How does it all work, money-wise? How do you finance such a tour, paying for all the plane tickets etc, when the industry itself has so little money to invest?

K: Well for Delfon Dio we put in 100% of the profit we made from selling Cayenne as well as personal money and a bit of sponsor money to finance all the costs of the trip. We tried to keep the costs down as much as we could by staying at Nick`s and friends’ places, but still it`s expensive to get everybody there and have rental cars etc.
So yeah, in comparison to snowboarding it`s definitely super low budget, but independent projects in snowboarding are pretty much in a similar situation.

B: ..And it’s gonna be the same for this one. All money we’ll be getting from Delfon Dio will go into the upcoming project. Speaking of which the more money we’ll get the more crazy we can go for the next tour. 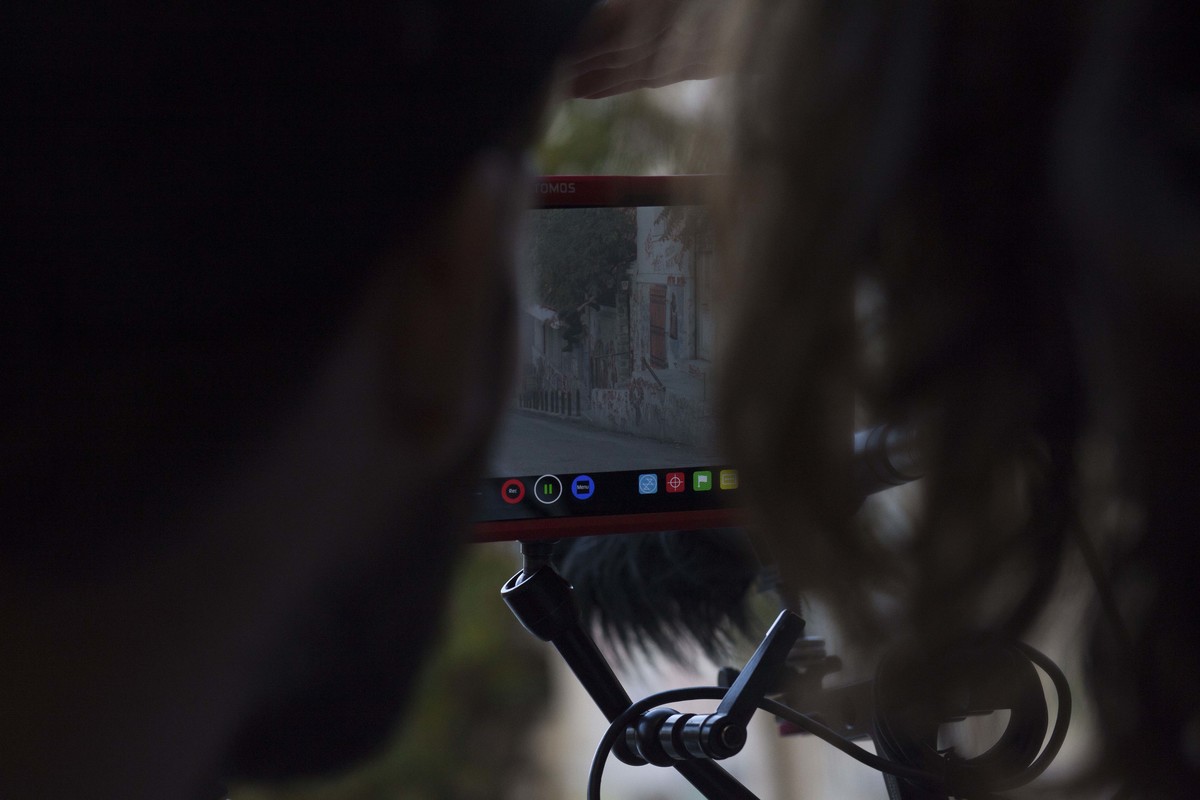 You set such a high standard in both production value and filming for rollerblading and made the video of the decade with Delfon Dio. Are you afraid of the weight of expectations for your next project?

K: Thanks, don`t think we set the standard though. Barely Dead came out about ten years ago and that was incredibly well made.
Yeah expectations are always rising, mainly to yourself on everything you do anyways.
For this series of videos we are making, I think there`s lots of improvement to be made still.

B: I think what makes this video so valuable is this immediate proximity to all the events. It’s not just a bunch of fricking good bladers doing tricks, but they also talk about the stuff that happened on tour which brings you ultimately closer to them.
Compared to the first Cayenne we improved a lot, I feel. And we’re really happy with the result. I’m not really afraid we can’t fulfill expectations for upcoming projects. As time goes by you keep looking back at past projects and naturally try to think of how to make the next one better. So yeah, I’m pretty confident we can manage that.

What are you going to be working on next?

K: Continue the Cayenne Project for sure, hopefully people will continue to support us in buying the VOD, book or whatever so we can get some budget to plan the next one.
Thanks for doing this interview with us!

B: I’m really hyped on doing the next one! There’s so many places that need to be seen! Shoutout to the boys who risked their life for our cameras! Thanks to Dominik, Freddy, Jonas, Guy and André who helped shaping this project. And a big thank you to the greek blading scene and Nick Kouros for his incredible hospitality and relentless commitment that made this video what it is today! 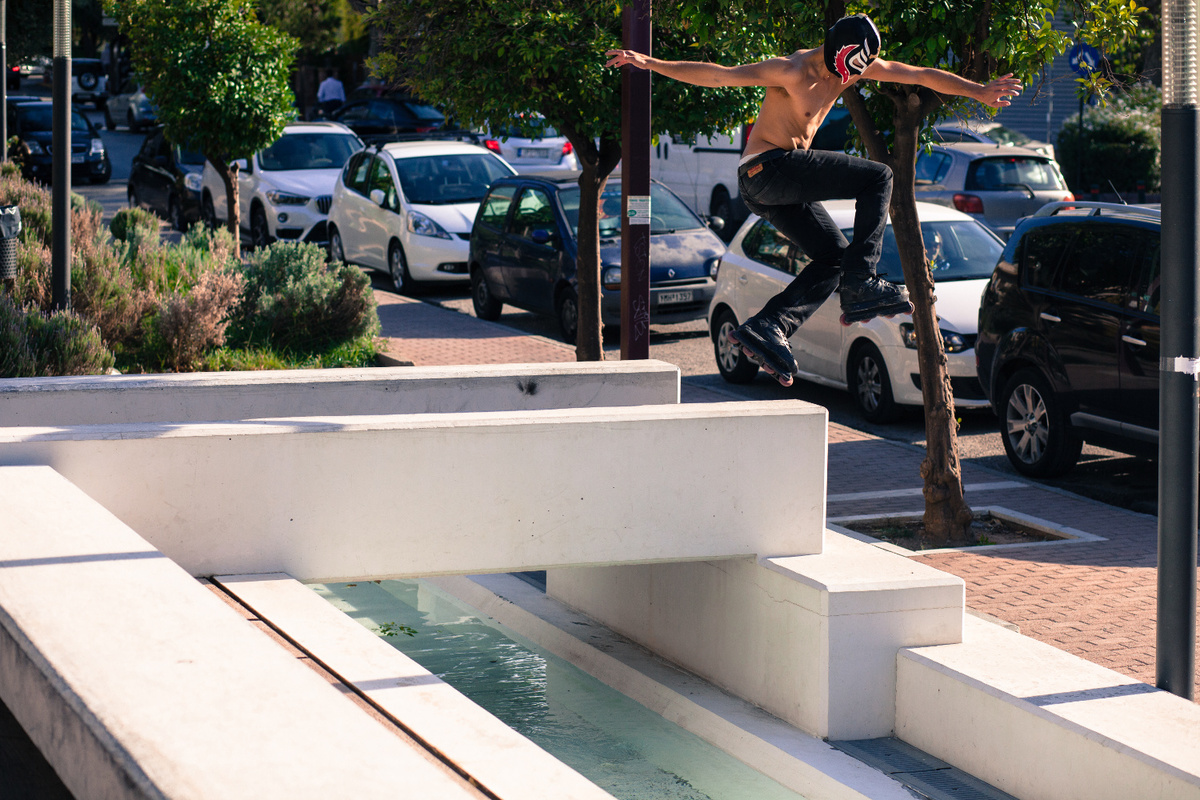 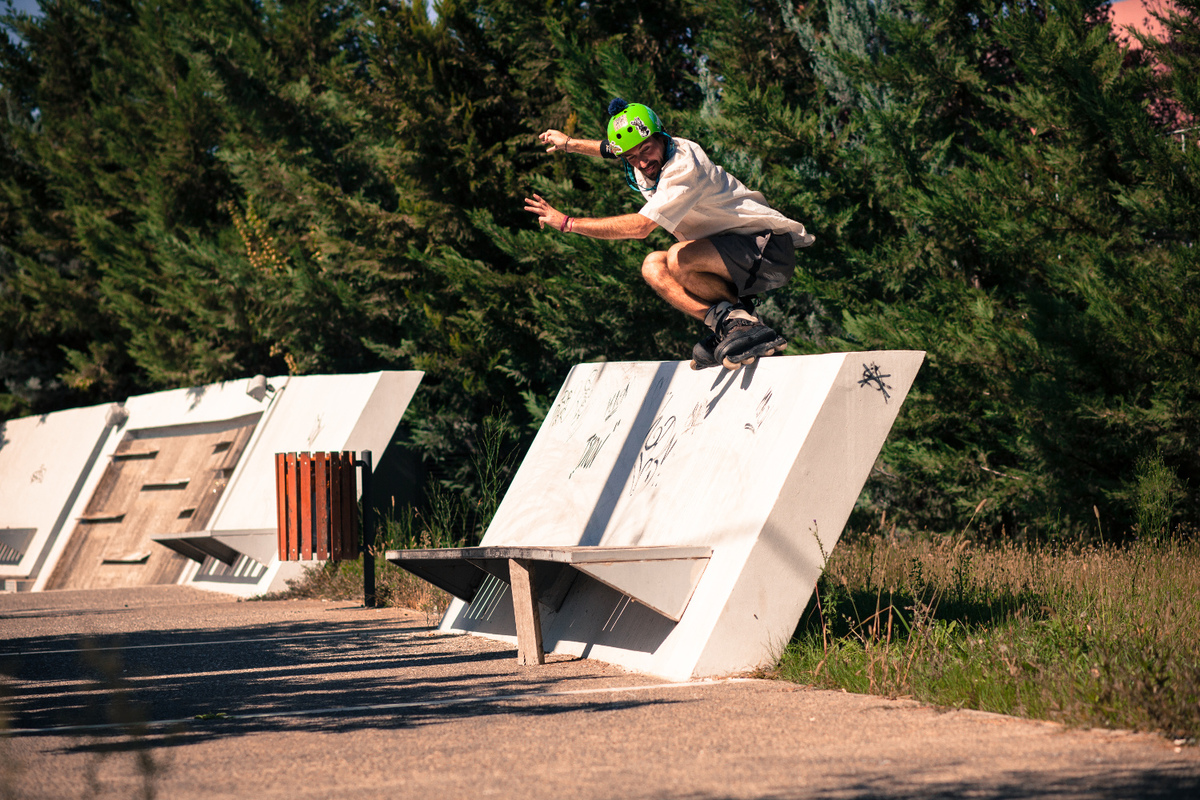 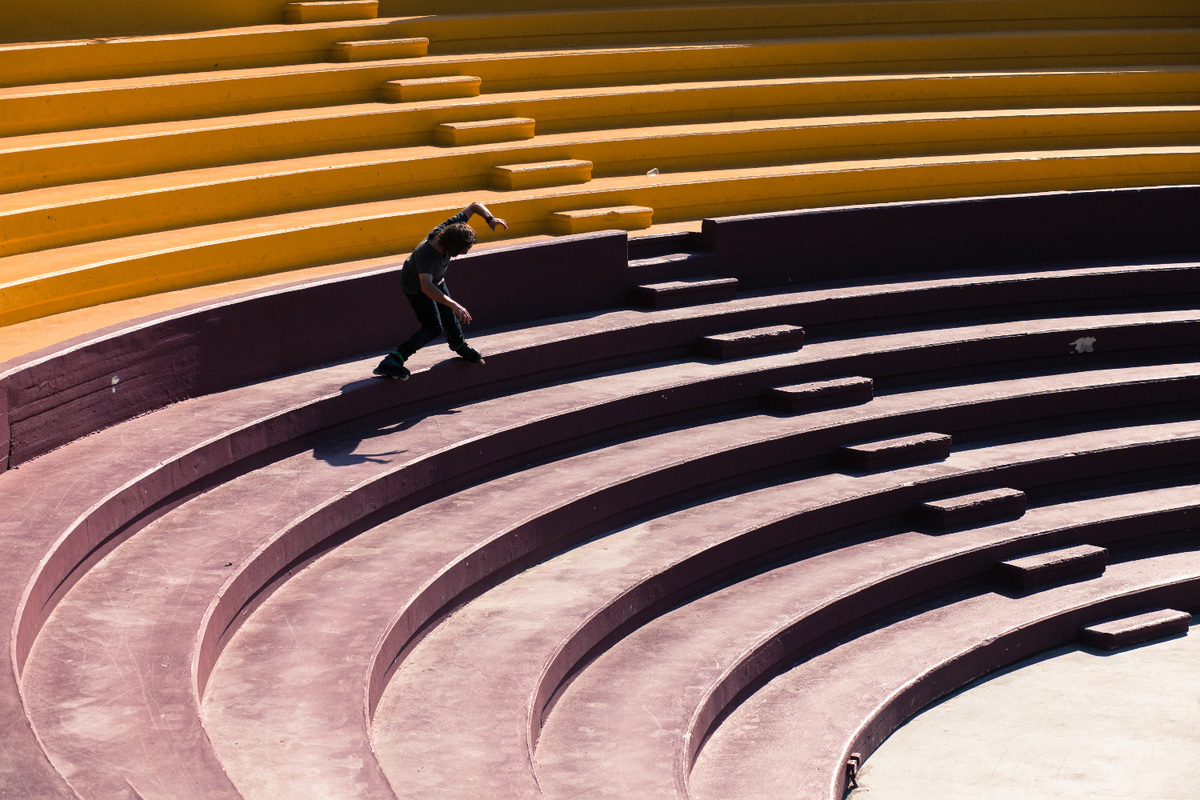 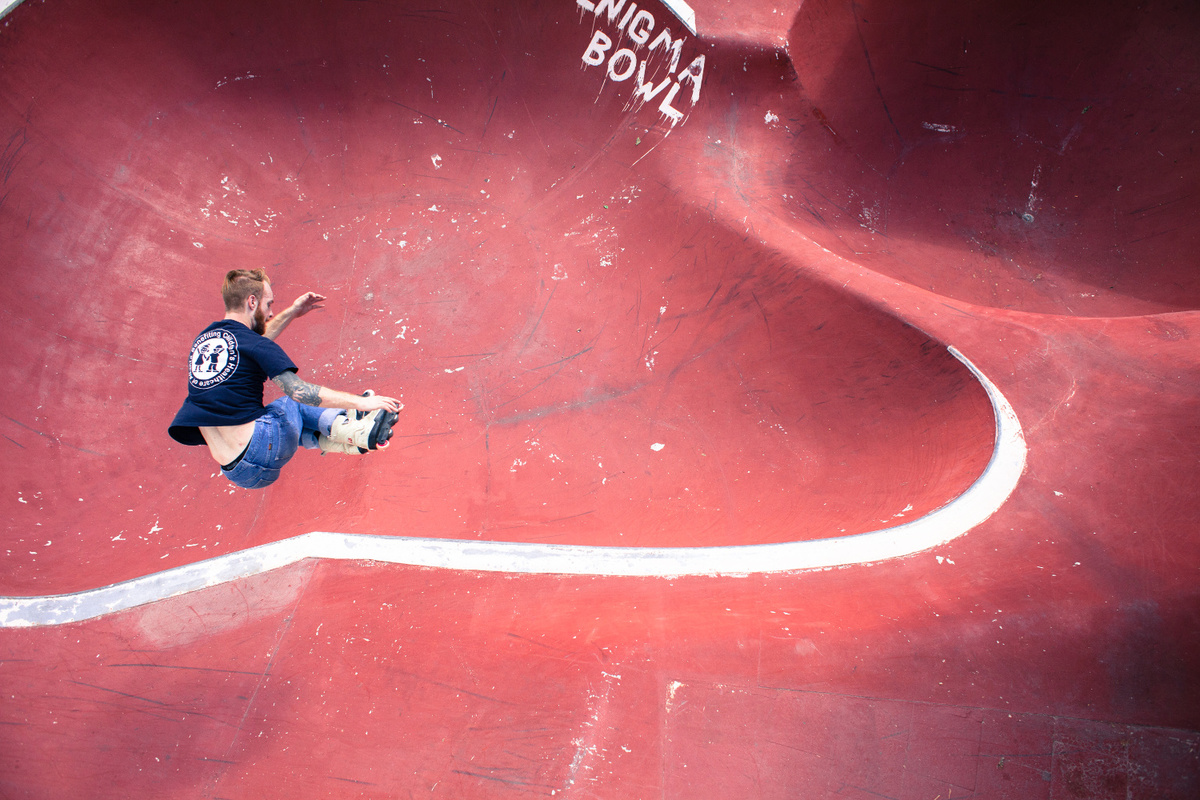 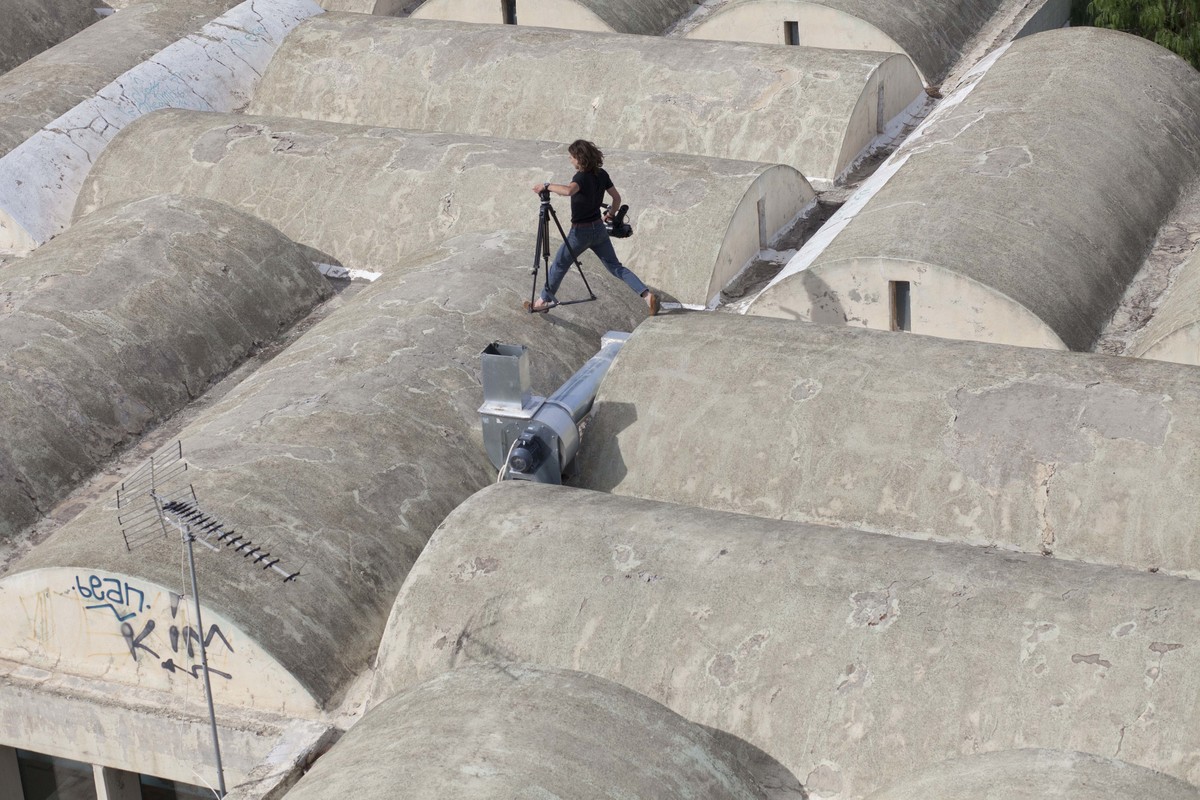 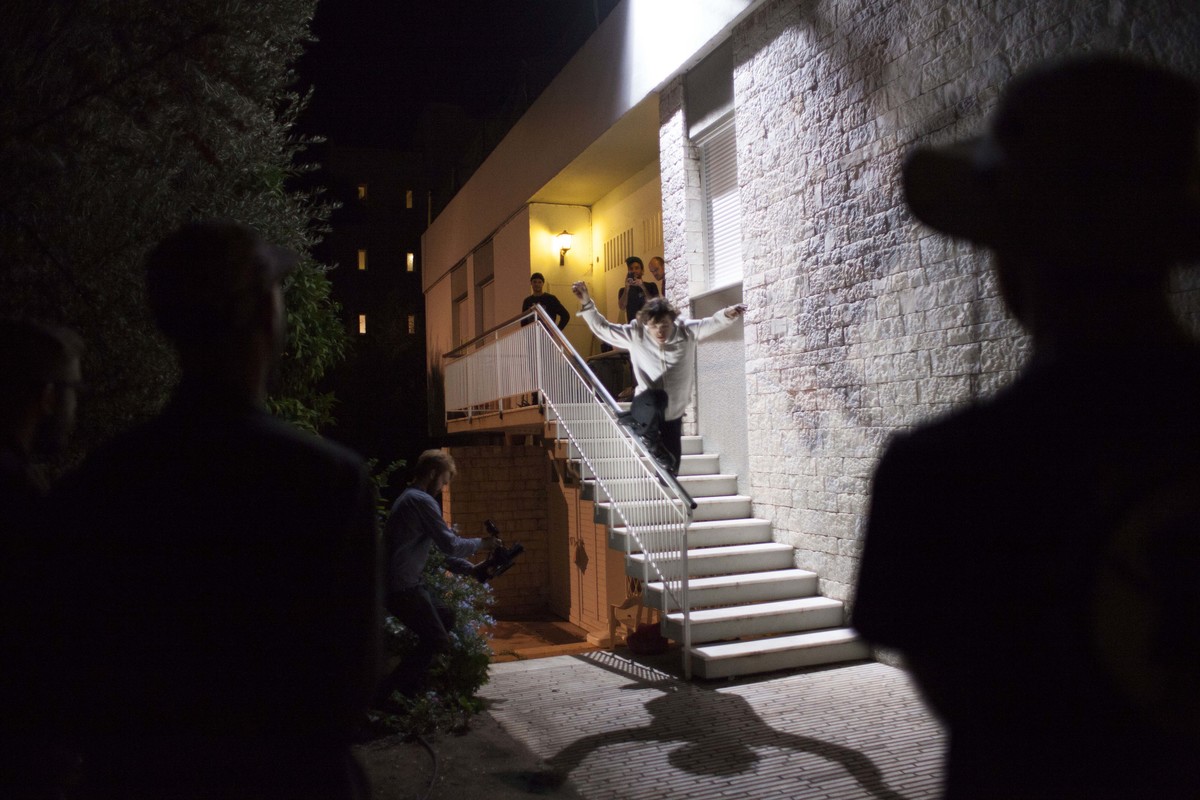 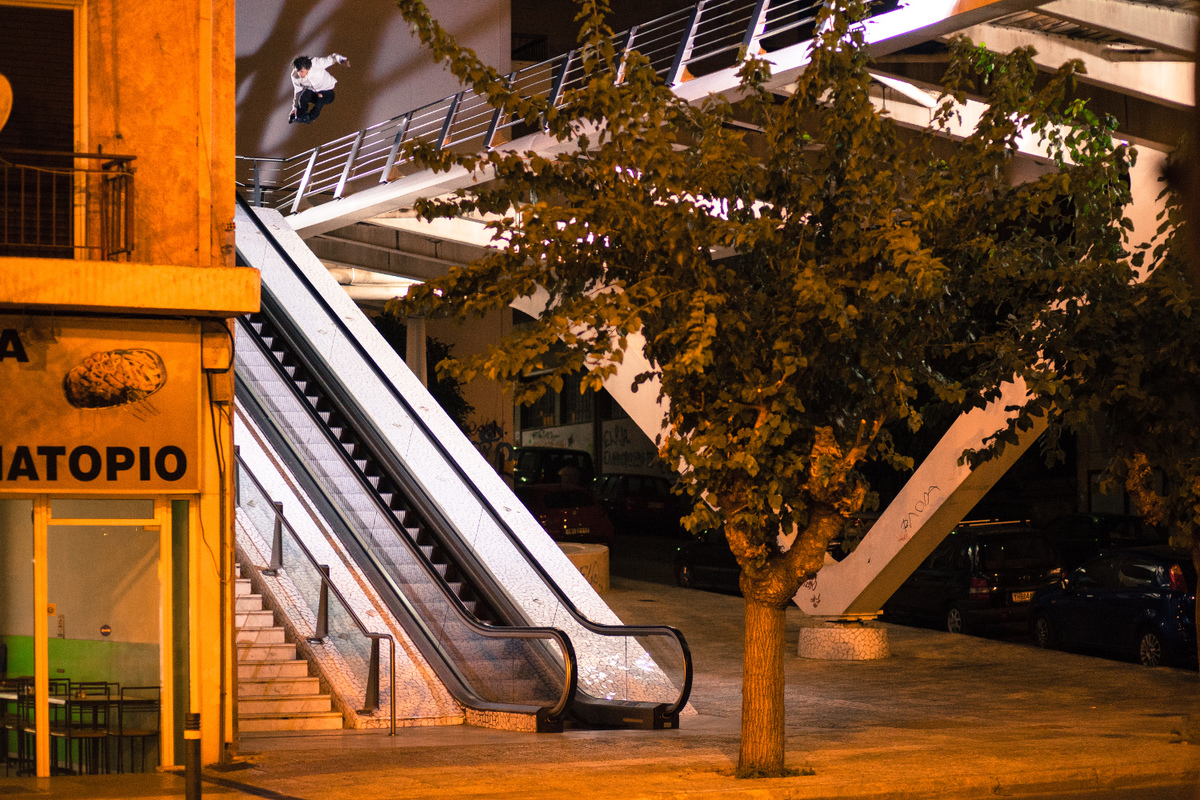