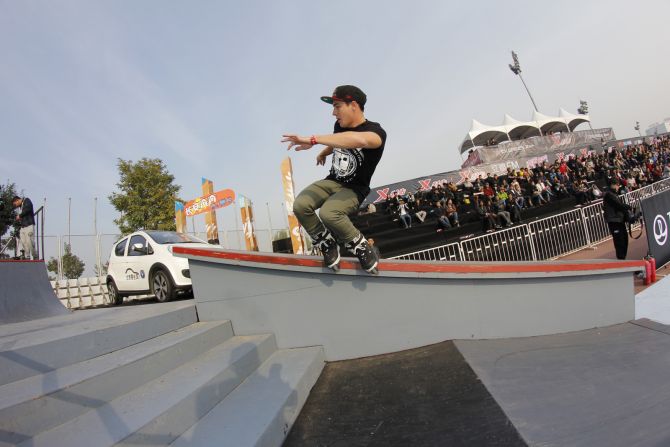 As the contest began I realized that I would be dropping in second after Alex Burston. Usually I prefer being at the begging of the heat so my muscles stay warmed so in this case I got lucky. Feeling a bit of nervousness I dropped in begging my first run of the contest, everything went as planned and I stuck my first line with a score in the nineties. After going through the rest of the field it was once again my turn: I dropped in switching a few tricks from my first run but still keeping the same line. My second run was alright but not as solid or fluid as my first and I ended up being in the high eighties, a few points lower than my first run. All of the other competitors killed it with stand out runs from Killa Kai as well as Mathias Silhan.

Prelims at a run contest is always a little stressful, but once they are over it feels as if a weight has been lifted off your shoulders. Once you know you have made it into finals you can relax and focus on the parts of your line that you can improve on while staying on your feet for the full time. With a park as large as the one here at CX-Games in Beijing, you have to be very conscious of the way you put your run together so you can maintain power and speed for the full 60 seconds.

At the end of the day they took 6 of the competitors to move on to the final event tomorrow. At the end of prelims the top three were Mathias Silhan in 3rd, Killa Kai in 2nd and myself in 1st. Obviously standings don’t mean a thing after prelims besides the fact that you made it past the first round and you will skate again. Tomorrow’s final is going to be amazing and I hope everyone skates amazing and enjoys the aura of the contest here in Beijing. I’m excited to say the least! Time to relax and get my mind right, tomorrow’s the big day!