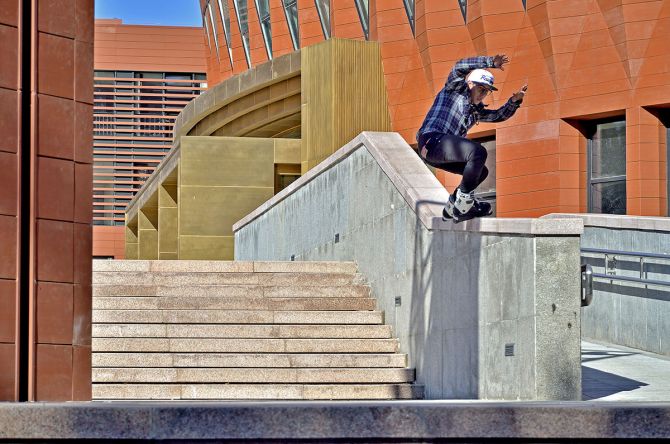 After parking the car we took some time touring the campus and taking pictures at some of the oldest landmarks on the campus, Tsinghua University is over 100 years old. I’ve been to a lot of college campuses around the world and I can say hands down this was by far the biggest campus I had ever set foot on as well as one of the most beautiful. As the tour continued, Franky took me to spots that he thought I might want to skate as well as showing me parts of the school that had never been skated. After heading back to the car to grab our skates and camera equipment we got to work in no time!

The first spot we hit was a mellow square drop rail that was absolutely perfect except for the motorcycle at the bottom which had an alarm that would sound every time I landed. Next, we went to a new building on the campus which was still in the process of being built. There was a perfect down/flat ledge that had never been touched so we figured it was time to break it in! Once we got the shot it was around 2pm and everyone was hungry so we made our way back to the heart of the city to grab some lunch.

To end the day I recommended that we hit up some small ledges that we had previously skated earlier in the week when we didn’t have a photographer. Though my suggestion may have been a little selfish due to a Starbucks on the corner of the ledges I knew we could get quality photo. After getting my coffee fix we had an amazing session as the sun went down and the traffic jams began!