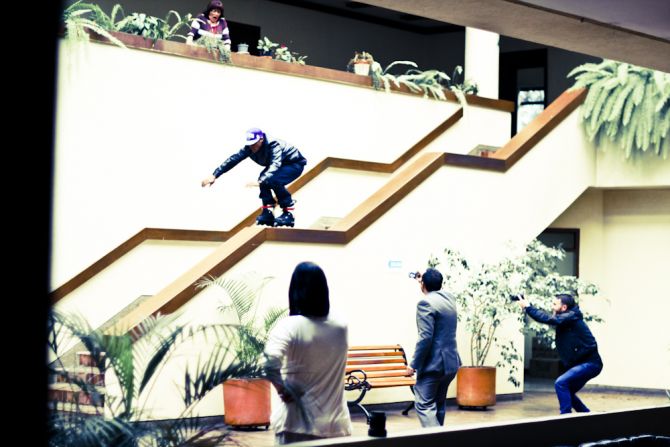 This first day was intense and filled with many interviews; 8 of them to be precise. The reason why Chris, Brian, and Dre are all here is because the organizers of this event, Proyecto Sur, Alcaldía de Yopal, and the Instituto de Deportes de Yopal Idry, want to make it big for their final competition. Gerson Garcia of Proyecto Sur and his team work hard at growing the sport, from giving blading lessons to little kids to organizing the Colombian Ranking National de Patinaje Extremo. Interviews started with Dre busting a phat front Unity at 9am on an untouched 25 stair ledge and ended at 6pm under a Bogota rain shower, which also didn’t stop Dre from rolling down a kink ledge inside the headquarters of one of the biggest newspaper in Bogota… official!

At midnight came time to get on a bus for a 7 hours bus mission to Yopal from Bogota. Best way to get a glimpse of the local lifestyle, from cows running on the streets to dudes squeezing in downtown traffic with their horse carriages in the Bogota Colonial center where we stay! And just like that we got put up in a dope bungalow by the Mayor of Yopal. Horses in free range, private pool… relaxing to say the least.

At 5pm we paid a visit to the skatepark where a solid hundred bladers were skating already. The 3 pros hit the bowls together with the locals for a good hour of fun. Particularly killing it yesterday were Colombian locals John Fredy, Chaca, Alejo Rozo, and also Daniel Vallejo from Mexico as well as some others who’s names I’m forgetting. I saw Dre chasing Aragon and Haffey around with the 7D so you will most likely see some of this action in the Razors podcast.

We’re now up for day 3, I’m writing this from yet another bar where we just ran into Sandro ‘Lili’ from Peru, and the rain is now coming down in Yopal as well! There is some good local promotion on this event as we keep hearing Haffey and Aragon’s names on the radio. Should be fun! As soon as it dries we’ll hit you up with some more updates! And we’re planning a surprise party in the bungalow for Gerson’s birthday so that too should be fun… On a side note: Dre is letting you know that Colombia’s got bunnnns! Peace y Salud desde Yopal Colombia!