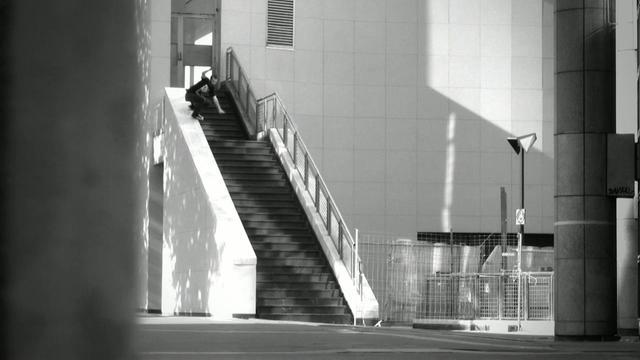 Milot_Profil2 from Trak on Vimeo.

Hi, my name is Clément Milot and I’ve been skating for seven years. I can’t really recall when I first started rollerblading, but I feel like I always have. I guess I initially started freestyle rolling after having seen some pictures of a few guys in my class, and I just thought “that’s cool.” So, my best friend Marvin bought his first skates and I went out to get my own (at Go Sport): the Tomatoes. That’s how it all started.

We would go to Bercy and practice on the curbs, and five years later we were still there. At the very beginning I found out I wasn’t a very technical guy (but it wasn’t for lack of trying) and started specializing in doing only a few tricks (full torques, shuffles, etc.). Then, little by little, I met new people and started skating outside of Bercy to explore the Parisian spots as well as the skateparks.

The next step was to leave Paris, so I moved around in France and Europe always searching for new spots to skate. I finally got my first sponsor (Nomades Skateshop), and as time passed by new ones were added (Vicious, 4×4, Third Impact, Ground Control, Nimh) which made me want to invest myself more in the sport by doing photos, edits, etc…

As of right now, my skating is still practical, not technical.  I always want to bring something to my sport by skating new and improbable spots, importing skatepark tricks to the street world, and by trying to make original videos.

Just recently, I moved to Lyon with my girlfriend. I hope to continue to progress with the same state of mind.

Francis: You’ve been rollerblading for nearly seven years now.  We’ve talked about it a lot together, but how do you take care of your health in terms of your body? Because we’ve got to say that rollerblading is a world where one sacrifices his body, and given the fact that you’ve damaged yourself a lot, how does that aspect influence your style of skating?

Clément: Uh… I’ve hurt myself quite a lot throughout the years. As I say, “You learn after each fall,” but I gradually realized that that philosophy has its limits. You can’t keep falling without a minimum of damage, so now I try to be more careful and I really try to fall as little as possible to avoid awaking the trauma of old wounds that would make me stop rolling altogether… again. As for today, knock on wood, my body is in pretty good shape, and it lets me skate when I want, but I’ve got to admit I’m a lot more cautious than before.

Francis: Does that process touch on the fact that you prefer to skate “big” spots rather than technical ones since that is what seems to shine through your videos ?

Clément: I do prefer to skate big spots rather than technical ones; not because I find that better to do, but I actually hurt myself less when I have to be careful and alert with my body while concentrating on the position of my feet. I find it very difficult to do rotations or complex switch ups, although it’s not for a lack of trying! Whereas on a very big spot I can do a basic trick and feel as if I’ve given a lot of myself. Therefore, I’m more at ease. I love the feeling you get when you land a “big spot” and you turn around to see what you’ve just accomplished. It’s very exciting because most of the spots I skate never have been skated, and I find satisfaction in thinking that I’ve really brought something to my sport.

Francis: Most of them also (probably) have never been filmed that way either… It was said in the Shock interview that you are an “Internet Generation Skater,” and we can see that many skaters wrote a lot of flattering comments to that regard – the way you see skating, in front or behind the camera. Does the way you perceive things as an amateur filmmaker influence you regarding the way you choose your spots?

Clément: Absolutely – and it influences me more and more. My favorite spots now don’t only depend on the obstacles, but also on the surrounding environment that comes with them for the sake of filming or photography. It’s also much more pleasing to skate in different environments (whether it be hostile, original, weird, etc.). I think my perception of rollerblading has changed since I’ve invested myself more in the video process. I’m more interested in “weird” spots; ones rarely stumbled upon that we don’t see very often in videos. It’s perfect for a video, but also for my skating because it enables me to specialize myself in a side of rollerblading not yet fully exploited (I’m not trying to sound pretentious here). So of course filming and editing influences my skating and vice versa.

Francis: Well, that’s not an aspect that sticks out often in rollerblading videos…

Clément: Yeah. Yeah. But it’s not as if it was a revolution- there are tons of guys who can skate what I skate. I guess that just because I persistently skate those particular type of spots, I get the hang of it more naturally and I find them with more ease.

Francis: For sure, but that’s  a quality that has been wildly remarkable in this ocean of online videos… We’re still surfing in this micro-celebrity period where everyone posts his videos without the will to make something in particular stand out.  Whereas, in most of your edits (especially the recent ones), the center stage is the graphic along with artistic side of street skating.  Playing with lights, shots, angles, timing – there’s a true directing process. Do you think that’s an element of promotion through the media that the rollerblading scene needs to develop? As an example, I’ll take Haffey’s part in Drip Drop…

Clément: Yes, I do think that the rollerblading scene’s videos could stand to have a more thorough and thought out directing and editing process in order for it to widen its public image.  However, “classic” videos also have their charm because they really convey the spontaneous “We’ll see when we get there” side of rollerblading where we only think about the trick and the moment without worrying about the whole quality/media side of it… They’re authentic, and that’s not without charm. But for me, I find that rollerblading today doesn’t stand solely by itself, but along with the different forms of media that help it shine. In a nutshell, everything goes:

– Good classic videos with raw skating and basic editing- without pretention.
– Quality, well thought out and original videos implying that the skater really has to invest himself in the editing in order to bring out his individuality; something personal.

As for Drip Drop? I love the skating, but I find that the editing doesn’t scale up and show the risks and quality of Haffey’s skating. This surprises me from Lennen because he usually shares his whole universe with us in his videos.

Francis: True. Haffey really gives all his guts in it…

Clément: For sure, I can’t say anything against Haffey. He really kicks ass, but Lennon kind of disappointed me in his editing, which is a real bummer because his trailer really made us linger with images of that caliber. I feel like the video was a disappointment…

Francis: And so it’s little by little you arrived into the scene, and than sponsors started arriving! How does that go? You’re already sponsored by Nimh and Ground Control for a little more (or less) than a year. What has this brought to you, and where are those t-shirts you promised me?

Clément: Well, having sponsors is pretty cool because you get a bit of equipment. But, it’s not like a package comes to my door everyday (you’d like that wouldn’t you?)! The true point for me having sponsors is that they motivate you, give you confidence, and opportunity (sending photos, images, doing interviews, going to contests). Sure, getting material stuff is cool too, but I’m not drowning in an ocean of skates and clothes (don’t worry you’ll get your t-shirt). How did they come about? Some by relationships and others on their own just sort of after tagging along. Some like Third Impact, Ground Control, 4X4, and Vicious directly contacted me because they liked my skating.

Francis: …so when will I get my t-shirt?

Clément: Come and get it in Lyon! Plus, I just received the new 4X4 and Vicious collection.

Francis: Dude you want to finish this up tomorrow ‘cause I’m tired and I’ve got to wake up early for a class? (Yeah right.)

Clément: All right, see you tomorrow.

Francis: So you’ve recently moved to Lyon with your girlfriend… New scene, new spots, new architecture, new people to meet, new influences. How’s all of that going for you?

Clément: I’ve been here for a month and everything’s going really well. The local skaters are pretty cool, creative and bring me to a lot of street spots. The landscape is different in Lyon than in Paris; it’s bumpier and there are lots of handrails along with spots that are closer together to each other. So, I like it because we blade from spot to spot. It’s giving me a few new editing ideas.

Francis:  So we briefly talked about the micro-celebrity phenomenon. And in the whole internet video mess, there’s a clear uprising of the European scene. However, there’s still the impression that the scene is still in the shadow.

Clément: Well, the European scene has nothing to enviable compared to the international scene, skaters, level, brands etc. We don’t have an icon; someone who represents the European scene. The best European skaters are only recognized once they hit the American stage. If they don’t make that effort, they stay in small contracts and don’t get the “pro model” advantages. But for me, that’s irrelevant because there is a European level and bygones for the monetary advantages. We still have many events in Europe, especially in France, that are sufficient enough to put some money aside, but the competition is tough.

Francis: In the end it’s always about money… at least you’re not falling into sponsor prostitution.  Because, speaking of contests, you’ve got to admit that you’re a lot less present than on the web. Actually, given that web presence, they could at least put you in the super V.I.P list on Rat Tail, damn it!

Clément: Contests… it’s really hard. You’ve got to be super efficient, technical, and persistent. And they’re almost always in skateparks. The skaters have an amazing level – very difficult to follow, and they’re only getting better and better. Plus, since it’s the only way in France to actually make money throughout the sport, the skaters are really motivated. The best are always present and on top of their game. So either you hang on or you just let go to find another way to market/commercialize yourself.

Francis: Yeah, and it’s another way to travel… hence the growth in the quality of your edits.  I remember the first ones you made (restrained laughter) – and when you see the result now? Wow!

Clément: Well, we do what we can. Plus, the major interest in video making is that it can follow to a real job, and that’s not to be discredited for the future.

Francis: It’s good to have numerous influences. You landed in the video world thanks to rollerblading, and the former passion has changed your skating style… very complementary.

Clément: Well, I think that wraps it up.

Francis: Yeah, Tara’s going to have a lot to translate.

Clément: I think she might kill me. Bye dude, kiss the cat.

Francis:  Chao dude- going to get my drink on. Bye Bye.