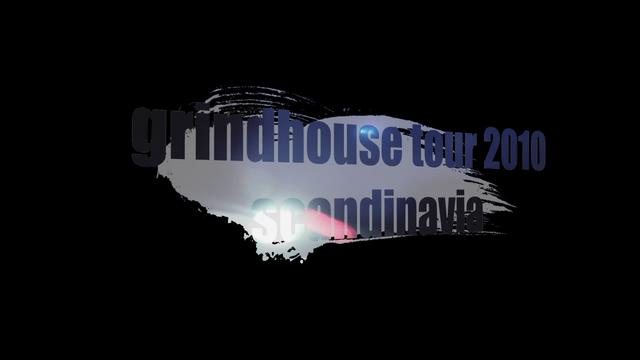 This was the second tour for me, but this time it was different, since we toured through my own country so I wasn’t as lost as we all were last year in France and Spain. This time I had to show us around my own city which is very hard cause when you chose spots to go to, some people are pleased and some don’t. It’s not like when you look for spots and just find something without any plans. But I think it ended up well and we skated a lot of spots I didn’t even think about before!

The last night in Copenhagen we all went out to drink some beers with the danish guys, and half of us got into a club nearby. I can’t really remember what kind of club it was. All I can remember is I’m sitting at a table talking with all the german guys and Maik suddenly smashes a bottle of beer on us and especially all over my entire head making me soaked haha, those guys are fun to party with!

The best part about this tour was definitely arriving in Copenhagen and finally understanding, why everybody loves this city so much. Most of the time we where in Sweden. it was raining so it didn’t really feel like a holiday to me. But as soon, as we crossed the bridge to Denmark, the weather changed and we had the first really sunny and warm day of the tour. Even though the tour was six weeks ago, I still can’t find the words how much I love Copenhagen and especially Christiania.

In Copenhagen we stayed at Jacob’s and his girlfriend sabrina’s place and it seems like she likes to cook. One morning after we woke up around 1pm we(she) decided to cook something for all of us. But somehow Timm and I were the only people who would go to the supermarket with sabrina and buy everything she needs to make us an awesome pasta. It was definitely the best food on the tour and by far the best way to start the day. What made the food even better was to see how everybody was jealous, because we had this huge bowl of pasta and we were sitting there, eating it all by ourself.

The grindhouse tour 2010 – how to explain this to someone who was not there? For me it started when I met up with Alex rudolf and Timm kittlitz to fly to stockholm. Ill try to keep this short so ill jump through time a bit. The first thing that will be stuck in my mind is me asking Alex how much money i should get and hes like take this (and presses some button on the atm) it turned out to be 500€ everything I had on my bank.

In stockholm we skated mostly spots we stumbled upon – stuff nobody skated before – quite amazing. Staying with all these guys in Kenths small apartment was an amazing experience too.

One of the best moments was the night we spend on the small “mountain” across the river of stockholm. The view was amazing, roland played the guitar and some drunk guy nearly died stumbling around on the rocks.

In Swedish supermarkets they offer “free” sweets for everyone who dares to take them.

I remember walking through the town on the way to a party i guess – when chris saw this rail and asked me if i could do it – i was maybe a bit drunk and thought it would be easy – chris (Cody) offered me 1kg of my fav “free” sweets to do it. So the next day we came back and suddenly the rail was way harder. It took me one hour till i jumped the angled kink the first time. I did it maybe seven times and got hurt quite a bit. Beside that I still got the sweets.

We had a lot of injuries on tour, alex hurt his ankle, maik did the same and timm tore some ligaments.

We had 2 cameras and filmed quite a lot. Chris has finished the DVD already. You can get already get it:)

For me it was both my first grindhouse tour and my first big filming project. Lot of funny stuff happened on tour, just what Daniel mentioned..we found this rail and I promised him one kilo nuts if he does it..unfornuately the landing was way too fucked up so he couldnt make it! But yeah, see for yourself in the grindhouse dvd!

By the way I am done with DVD..pretty excited to see this thing dropping on the market!

But after all my favorite moment was everyone getting wasted that night in Copenhagen..best night!

I just gotta use the opportunity to thank all the people who made this possible..especially Zebastian Cassel, Linus Hellström, Kenth Ulvedal and Jacob Juul who gave us a place to sleep..

It was a really well organized tour. Thank u maik. i had a really really great time with my friends!
We met a lot of new people, saw some citys, drove a lot around Scandinavia,h ad a lot of fun, drank a lot of beer and destroyed our bodys a lot;0) but all in all one of the best times in my life!
A tour is the fucking best cause u have to do what u love. SKATE. There is no better thing in the world.

Thank you Thorsten (Grindhouse) that you made it possible!

After all this being said I just realize that being the last one to talk about the tour sucks as everything is already being mentioned, but there is one thing I realized while skipping through the tour pictures. I am wrong actually. There are tons of situations to talk about.

For example the mornings we experienced while hanging out every morning in stockholm and having our breakfast at the big green hill at baggarmossen and plan out the day, the singalongs in the bus with the most annoying but funny tracks and sascha kept asking for another “Synapsenkitzler” for the whole tour while everyone was already pissed and hoping he’ll get tired listening to that song, of course the constant walks around the cities just to have something for dinner, go shopping and of course gain some cultural education while just enjoying the pure beauty of the Scandinavian cities.

There is so much more, so i just keep writing, so i’ll go on by telling you about the moment when Daniel walked out the try-on inside a big shopping centre completely dressed up like a Marathonrunner making everyone laugh!

At all the places we stayed it was very crowded. So Roland and me decided to sleep in the car all the nights. That way we don’t have to hang out till 6 am, but fall asleep as soon as i’m getting tired. So as we were in Copenhagen Roland and me drove our car to Cristiania and slept right next to the lake, as i woke up that next day the view that was offered to me completely got me, i will never forget that morning.

Another thing that should be mentioned is, Alex telling me for the whole tour that my CO frame just broke after landing a trick, constantly, btw. this was just cause he broke 3 pairs in a row, and the only time he didn’t told me that was as i did a inspin back savannah on a rail in linköping and as soon as i landed i heard the crack of the frame. Alex reaction still is unforgettable.

But there is one overall moment of the tour that meant a lot to me:

And that was as the guy behind the desk at HERTZ accepted our pre-paid creditcard.

The coolest thing that happened in Stockholm was the party. Stockholm is quite expensive thinking of going out and have fun. And I hate spending a lot of money just to get drunk. But somehow because we were so cool, we got into that club for free. Nicely done so far. Beers were like five til six euros each. In my opinion way too much and not worth it. But somehow our coolness fixed everything again and suddenly we had more beer cans on our table than we could actually drink. I didnt get that but liked it for sure.

If you have read all the stuff on top you can imagine that is was an amazing tour with a whole lot of funny storys to tell. I really enjoyed being on a Grindhouse tour again, even just as the driver not as a team mate this time. This trip made me feel like back in the days when i was travelling around with my buddys Daniel P., Andre Lepzy, Patrick Smith and the other Grindhouse guys in 2000 and 2001. I really want to thank Thorsten Rüffer and Maik Lojewski for hooking me up and giving me another great memory of rollerblading with my dear friends. Every member on this trip made this tour absolutely awesome and i´ll never forget about those days and all of our lovely friends in Scandinavia who keep us save at night.