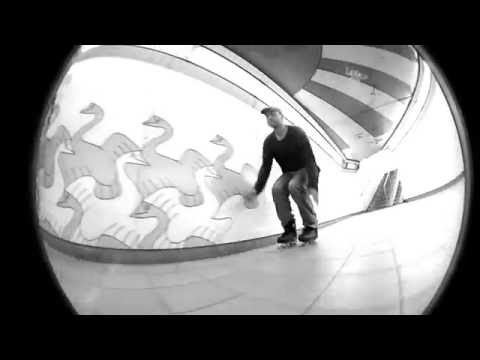 Patrick Ridder is a busy bee, skating and shooting for the FTS, and his latest video was premiered on the Themgoods blog, for which he even wrote a little text, that we’ll just copypasta for you guys.

Now that fall hits Germany it gets almost impossible to skate outside. Rain for weeks cold and everything turns grey. Specially in a city like Frankfurt, the only German city with big skyscrapers and a lot of concrete. It’s hard to get motivated and the next indoor park is a 2 hour drive.

The Frankfurt subway system has 27 underground stops and if you ever seen the architecture on the surface of Frankfurt then you can imagine that the city created some very beautiful subway stations.
We already skated some in the past but as soon as we started to look proper for spots underground, we realized that we didn’t need an indoor park to survive the winter.

Frankfurt is very well known as the city with the highest crime rate in Germany. So the only annoying part about skating underground are the mass securities, crackheads and the smell of piss.

The subway here gets used daily by 300,000 people and making this edit between all these passengers made us realize that blading isn’t really hated anymore at least here. It just never gets seen that much nowadays. People pulled out their phones clapped their hands and gave us props. Maybe blading should stay underground to get back to the top.. haha