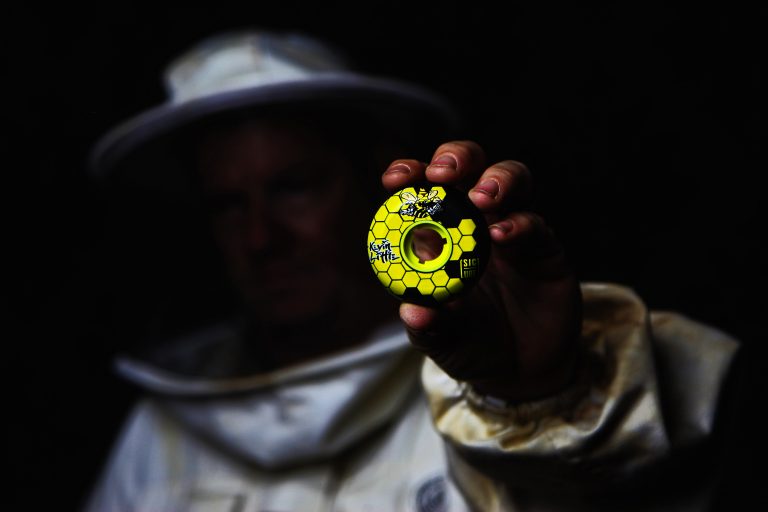 It is not everyday that we get to share content from a member of our staff but today we are pleased to share our editor-in-chief Kevin Little‘s video promo for his new signature wheel from Sic Urethane. Titled “The Swarm“, Kevin filmed this profile in his hometown of San Angelo Texas during the majority of 2021 with the assistance of his good friend Matt Bright. The video shows off Kevin’s unique skating style & unorthodox spot selection as well as his off-beat sense of humor (please forgive his terrible dancing abilities.)

Kevin had this to say about the new wheel design and the inspiration behind it:

The design behind my wheel was heavily influenced by many of my favorite things, the most obvious being the Wu Tang Clan,the greatest hiphop group of all time. But also cheesy horror videos, old school Senate packaging and skaters that have heavily inspired me such as Chris Farmer, Champion Baumstimler and of course Demetrios George.

I went with my favorite black and yellow color scheme for it’s urethane and hub and chose the 60mm bullet profile which is great for either flat or anti rocker and a 92A hardness to withstand the harsh Texas terrain.To create something unique for the twentieth anniversary of Sic I wanted to make a special packaging for the wheels so I found some classic tape cases and designed the cover to resemble campy VHS inserts from the 80’s, it is also a tip-of-the cap to the ’97 Senate wheel line. Also I created “The Swarm”, a fictional story that would tie together both the promotional video as well as the packaging. I was also fortunate to have been lent some awesome beekeepers outfits to film the promotional shots with as well.

If you were wanting to snag a set of the new wheels, well…. they quickly sold out in about a day. But there are select skateshops in the U.S who still have some on the way, so you better jump on it because they won’t last long!