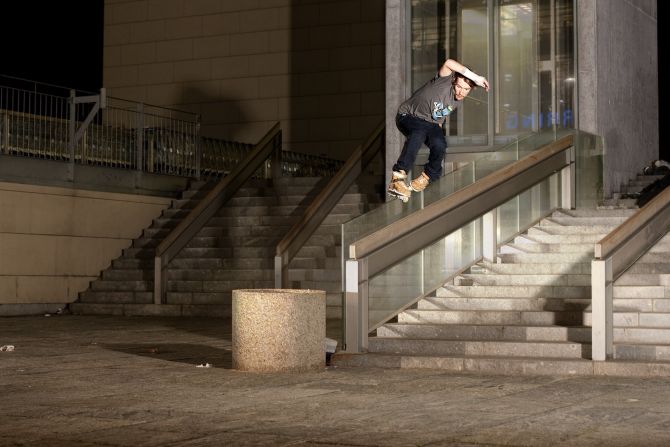 The first time I went to party with Mr. Prell was after a contest in Berlin, it was a Halloween-Party and with a costume the entry was free. Daniel wrapped his shirt around his head, left his zipper open, said he was doing the call-boy and was in. I’m not going in detail here but some things you should be aware of when clubbing with Daniel:

– Make sure you lock the toilet cabin as soon as possible

– You’ll get stuff for free

– You’ll get away with almost everything, since Daniel has this strange kind of luck concerning authorities

– You will barely use the restrooms

Here are some random portraits of me. And yes, those wheels are all mine.

I still have those 7 screws + the metal plate in my left knee. I guess I should get them removed but then this would mean at least a month without skating. The right pic shows my shoulder after last years surgery – I tore all the ligaments, some bone got loose, etc. riding my bike back home from university.

Here are some more skate pics – the first one is pretty recent – shot after the Real street Berlin – I was really tired but when I found a rail with drop on both sides I just had to do it. We had to break into the closed down cinema around the corner and find some boards because there was no floor but just some metal bars we put the boards on.

I guess that’s the spot I learned most of my tricks on. Here we have a double negative to x-grind 540.I love this spot – even used to skate there alone. Nobody ever complained about skating there nor did the police ever stop when they passed by.

I’m blessed with some fucking awesome friends – I picked these just because I like the pictures.
1. Miro & Max. Max is one of the two guys I skate with ALL the time. Next in line with the broken nose is Basti “Hofermodus” Hofer – awesome dude, photographer and spare-time drunk.
Third picture is my team mate and bro Maik Lojewski trying to be sexy. Here we have Klöber and Michi. Michi is the other dude I hang out with like every free minute. Next one is Patrick Justin Smith – one of the guys I have been looking up to for his incredible truespin grinds since I first met him. And last but not least – Alex – not skating anymore – but still one of the best dudes.

I’ve been riding for Grindhouse for at least 100 years. One of the reasons why I love GH is the amazing times I always had and still have when were on tour. Most of the guys are close friends of mine. Here we are in Switzerland at Mölys place copying his poster of himself.

Going through all my pictures for this interview I noticed that being on tour a lot sometimes things don’t turn out as planned and we end up sleeping in weird places.

Talking about sleeping in weird places. This pic is from a trip to Copenhagen – we went to a bar and I decided to stay longer. When I got home the guys where fast asleep so I couldn’t get in. I ended up building this “tent” in the backyard – found the blanket and rabbit in a baby buggy.
A few days later Felix and I had to sleep there again. It was pretty comfortable though.

Being on tour a lot I tend to eat loads of crap. Beer aka Karle is an essential companion. McDonalds sucks but sometimes you can’t avoid it. The same goes for kebab – pizza is great but should have the right size.

When I’m not skating I tend to study interactive media at the local university. This pic shows the set of a stop motion movie we made. It turned out horrible by the way.

I’m also into photography – I started this hobby a few years ago. That’s the first DSLR and lenses I bought. The 55-250mm was a mistake though. If you want to check out some of my pictures visit my flickr: http://www.flickr.com/photos/danielll/

A pic I shot of my friend Max – If I’m not wrong I used a canon 7d with a 50mm 1.8 lens + available light. I love the architecture in this shot. I have to admit that its highly photoshopped though. Yup I enjoy doing that too.

The right pic is the original – and I hate it. I had to copy this for university photo class. Finding the right bottles took ages and was expensive. Copying the light situation was nearly impossible because I had to do it at home. I didn’t use Photoshop because the professor told us he didn’t like it. I ended up getting a bad grade because the “streaks” could easily have been photoshopped. Thanks a lot.

A screen from an animated short I have to do this semester. Should have been done like a year ago. I don’t know why I wanted to make something hand drawn cause I don’t even know how to hold a pen.

Through skating I got into contact with filming and editing. Have been doing this for ages. Here we have a screenshot of an edit I made for my friend Sacha Lopez. You can check out some of my stuff on vimeo: https://vimeo.com/danielll/videos

Ahem, yes. This is an old picture of my room – its never really clean but here its a complete mess – I like the picture though. There are lots of things to discover like the skates on my cabinet or the barbell I stumble over more often than I train with.

I’ve been on the Grindhouse Team forever – And I totally love it. Here we have 2 old GH catalogs with pictures of me. We are working on a pro wheel at the moment.

I’m running out of interesting things to talk about so I’m going to finish this interview with a totally random shot of me kicking Santa.