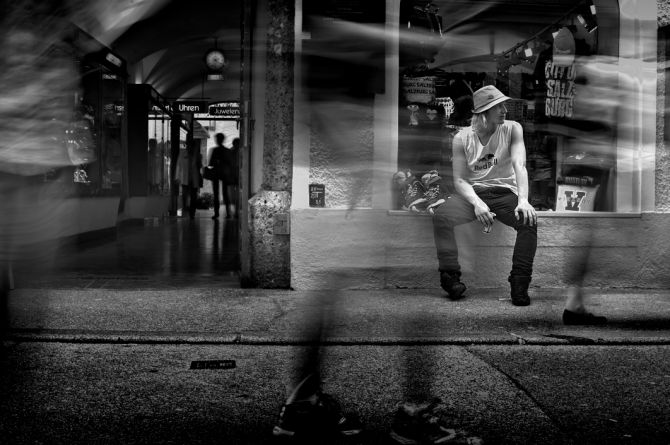 Horn, how old are you and how long have you been skating?

Did you study anything or do a scholarship?

I learned to be a car and truck mechanic.

How did you get into skating?

How can you not get into skating? It was just a progression… the more possibilities I had (my idols, videos, spots and skills) the further I fell into blading.

Who first discovered your talent in blading? And when did Razors pick you up?

Rene Nocker from Austria was the first to think I was talented and put me on the K2 team in Austria when I was 12. I’ve been skating for Razors since 2004 I think.

Do you have any other hidden talents?

No more than anyone else, I would say.

Old motorcycles, old cars, beautiful women, beautiful countries, some people, some spots, music and so much more. It’s pretty easy to fascinate me!

What are you afraid of?

Injuries, spiders, Chuck Norris and the future all scare me. What comes after skating?

You moved back from the USA to Europe, why was that?

Funny question, I never moved to the US! I just spent several months there every year for the past 7 years, but I live in Europe, in Germany.

You travelled the world with Razors, what was the craziest situation you found yourself in?

I can’t talk about that… I need to talk to a psychologist first to find out what’s normal and what’s not.

Hanging out with the Santee crew I think.

How about the worst?

Hanging out with the Santee crew I think.

Do you have a nickname? Who invented it?

Yes, everyone calls me Horn, I don’t really know who invented it but I do know that everyone is too lazy to pronounce Horngacher properly.

It changes every week, but right now my motto is “kill it before it lays eggs.”

Is it true you skate droprails by yourself? And that nobody was there when you did the worst disaster grind of your life?

It’s true that sometimes I skate hard by myself, but on droprails I’d like to have someone around just in case something happens. I don’t wanna die by myself in the dirt, that would just be sad.

The best funbox in the whole wide world, I just skated it for a couple of weeks, but I know that was just the beginning!

This was my favorite spot in Austria, the most perfect ledge facility I’ve ever seen.

I made my dad really proud this day, because he never expected his son to be on the field of his favorite football club during the most important game that year. They showed my section from GT on the big screens. And besides that on the left is a good buddy of mine and a hell of a trial biker (Thomas Öhler).

Be-mag was always a part in my skater life, we shot this on the expo in Hannover long time ago.

I always enjoy being a part of the Razors family, this photo was shot in Beijing, China.

We are standing on the track where Usain Bolt wrote history, in the birds nest in Beijing, China.

GTK tour (gipsys on tour) the name was the program.

The first street stunt I did with a helmet on.

What you can’t see on here is that one of my buddies was fighting a security guy, so I could skate the spot.

Ignition family !!! Too bad ignition is not here anymore 🙁

That’s what it looks like when we take off from Damien’s house to skate some street. except Nick at that time, as you can see.

Somewhere in the outback, Damien, his dad, his brother, cornnut, and the little badboy in my hand.

Damien and me building that backflip rail for GT. Damien can seriously build anything!

This is my hometown Salzburg, my little hideout.

I have a heart for animals, and this little cat was just unreal.

I just have that serious look because I’m scared of that guy behind me.

Check out the door of the balcony… I shot this photo in Morocco.