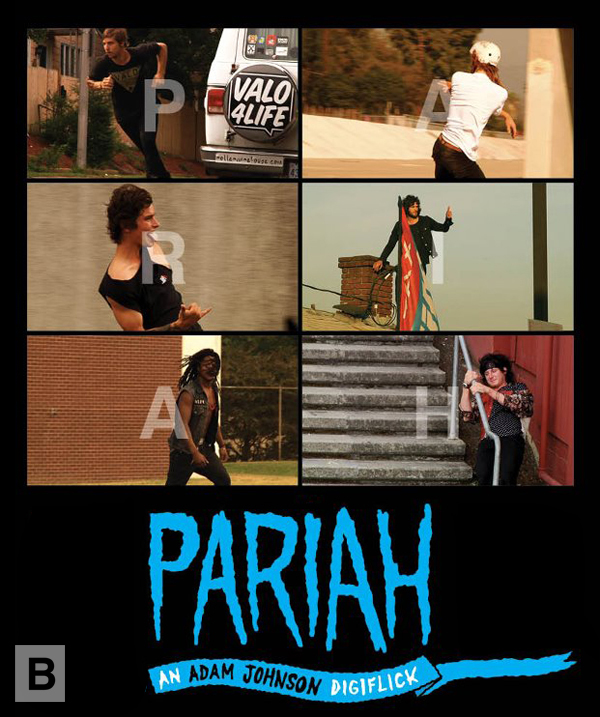 “Pariah” is the latest flick by Adam Johnson, featuring some of your favorite pros plus some promising up-and-comers. After having Adam as one of our first interview partners we also wanted to hear what the riders featured in the DVD have to say. A few words from Broskow, Farmer, Montre and the rest of the crew. Read about their favorite tour moments, worst situations while filming and being on the road in general…

Worst situation while filming for “Pariah”?

Brian Freeman: Aside from all the injuries and the rain it would have to be grabbing that dead dog out of the street for that lady without even thinking about it. I think it could have brought bad vibes around. Don’t touch dead dogs lil niggas.
John Bolino: Running out of money for beer or weed.
Michael Garlinghouse: Getting kicked out after almost landing my ender on different visits to Oakland.
Paul John: Princeton in the fall.
Nick Labarre: Driving from California to NYC over 10 days with no radio, no music, no nothing.

Alex Broskow: It was awesome being on the east coast trip and having Montre, John, Enanoh, and Stokley in Kansas City. Then watching the final project at the premiere.
Montre Livingston: I was drunk the whole time, I’m not too sure. I would just say that it was awesome the whole time.
Dylan Davis: NYC Blade invitational, pushing a punk kid through a window in a fight at a party in Kansas City, or the LSD in SF… Plenty of good times.
Chris Farmer: Favorite memory is a toss-up between the strip clubs in Portland, Big Jay’s house, or AJ devising a plan to meet a long lost love of mine.
Erik Stokley: Probably hanging out wth enanoh haha, funniest fucking dude. that or the van breaking down and having to stay with some german chick we met a bar in illinois, that shit was weird.
Ross Kuhn : My favorite memory from the tour was hanging out with Sean Kelso and his lady (Sasha) in Kansas City, MO.
Marc Moreno: I can’t clearly remember but the RADhouse was de puta madre.

What was filming for “Pariah” about?

Chris Farmer: Simply hanging out with some of my best friends on the planet and creating memories I will never forget. I felt very privileged to be involved.
Erik Stokley: Just traveling around the country getting drunk with all my buddies, getting into some hilarious shit, and skating awesome spots that no one has skated before.
Ross Kuhn: Just like filming for any other video, “Pariah” was about getting out of the house, skating some new stuff, and meeting some good people. Although, a little more sketchy because AJ was driving.
Marc Moreno: Shit was wild and intense.
Check the interview with Adam Johnson to find out more about “Pariah”.