Remy Cadier is a staple of European rollerblading and has been one for over twenty years now. He is one of the most productive videographers in Europe, and his latest projects include Edwinfinity, an hommage to the late and great Dutch pro Edwin Wieringh, and the Cityhopper series created with Rollerblade pro rider Sven Boekhorst. As a friend of Remy’s on Facebook, I know he pretty much always has rollerblading on his mind, right after his lovely family and before sneakers and AFC Ajax. Never to be one to tire from finding new ways to promote rollerblading within and out of our niche, he recently started a Facebook group dedicated to rollerblading GIFs.
As they have been around for decades now (I personally remember Vinny Minton’s 360 topsoul in Razors Superflats from Jan Welch’s Scummagazine), Remy decided to produce new GIFs to share them with rollerbladers old and young, and to help put the right stuff on the table.

So, here’s what Remy has to say about his new GIF project. 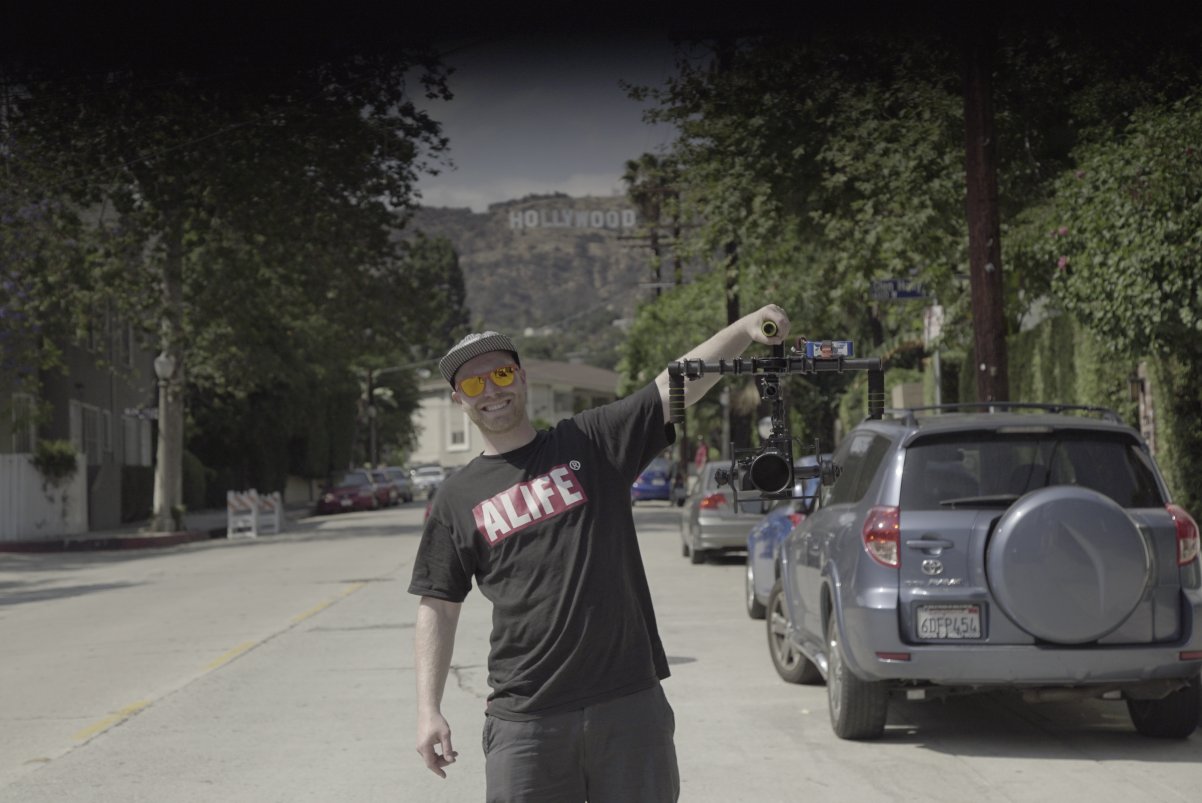 Remy out on a shooting.

Be-Mag: How did you come up with the idea for your Rollerblading GIFs Facebook group?

Remy: GIFs have been around since before we all started using the internet, and the last couple of years they have become a very popular way of showing funny or cool bits of video. But when I was checking the regular GIF upload sites for blading GIFs I could only find a few dope tricks and loads of fails and mediocre blading, which kind of shocked me. To see that almost everything you can think of is available in GIF format, but no good blading was something I thought had to change. In order to get more eyeballs focused on blading I thought we could use GIFs, since they are very likely to be shared on social media. We had the epic Richie Eisler backside, which reached the frontpage on Reddit, and I’d been seeing a few nice GIFs here and there on Facebook so I thought that there had to be a Facebook group in which I could browse cool blading GIFs. To my surprise I did not find anything blading GIF related. So I decided to make a group.

Be-Mag: Do you think that the GIF format is suitable for showing rollerblading?

Remy: I do. In 10 to 15 seconds you can easily show a few clips or a line. It’s not the same as watching a whole edit, but sometimes you only want 10 seconds of blading.

Be-Mag: How many gifs have already been published? Which ones do get more likes, from skaters that were popular in the late nineties, the early 2000s or the ones skating now?

Remy: I started off grabbing GIFs from some of my own videos, and off a few older VOD’s I had bought. Very soon people started posting other epic blading moments, and it just grew organically. I’d say we have over 100 GIFs at the moment, but don’t take my word for it, have a look for yourself.

The GIFs that get most views and likes tend to be of the usual superstar bladers of today, but I and others do post older hammers by skaters who might be unknown to guys that are relatively new to the game. These clips tend to do very well and get loads of shares.

These blade GIFs are a magnificent way of introducing sometimes forgotten tricks or skaters to a new generation. Some tricks are just timeless. Same goes for some bladers’ style.

Be-Mag: Do you try to enforce quality control and if not, why?

Remy: I leave all GIFs up as long as it’s blading related, also crappy tricks by washed up dudes or youngsters just getting into blading. Non GIFs get deleted right away.

But the way Facebook works causes the best liked posts to appear more regularly in your feed.

I like to also post the link to the videos from which the GIF was taken, to give people a chance to see the whole thing. And to drive views to the creators of the content.

Be-Mag: Do you have more US or EU people posting?

Remy: Right now I’d say it’s sixty percent European posts and the other forty would be the rest of the world. So we get a broad selection.

Be-Mag: What is your personal favourite?

Remy: There are too many to choose from. Anything Dustin Latimer, but if I’d have to choose one it would have to be the most famous bladeGIF of all time, Richie Eislers backside in Danny Beer’s edit.

Be-Mag: Are there any clips you’d like to put into gifs but can’t find them?

Remy: I was looking for Brian Shima’s wallride at that IMYTA. I think it was in Montréal. (Could be wrong). 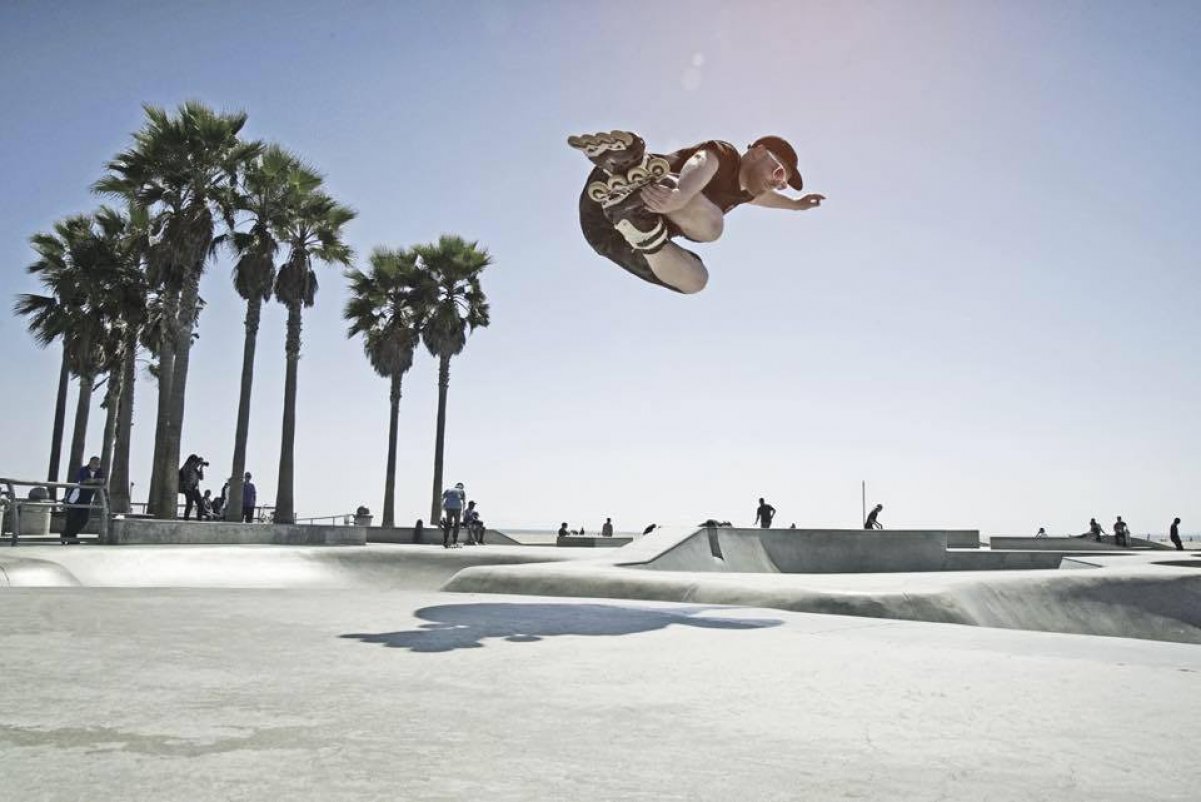 Mute in a Venice beach bowl.

Be-Mag: What’s your next project after Cityhopper?

Remy: Well, ofcourse I made the Edwinfinity after completing Cityhopper World. Right now besides my normal freelance work I’ve been filming for a clothingbrand from Amsterdam called ‘Nuff Said. Since last summer I’ve been getting clips with a few of the Amsterdam guys for this project. Edwin Wieringh was also a part of this, the last time he ever skated was for this edit. So literally his last ever tricks will be featured in this video. Also in the squad are Pascal Tan, Randy Abels, Remy Schmidt and Tyron Ballantine.